Barrington Levy has apologized to HoodCelebrityy after making lewd comments on Instagram which she later exposed on her page. The comment was in response to a video for the song “Champagne” posted on the singer’s page, which she captioned, “Open up gal yuh haffi bubble like Champagne.”

The comment made by Levy’s official page reads, “Open up what what can you do if she open up you can’t do anything you don’t have a dock to put inso leave it alone.” A second comment from the singer’s verified page stated, “What you swaying your a girl, so how saying that.”

Let’s just say HoodCelebrityy was not happy about the remarks. Barrington Levy‘s outlandish statements continued when he posted this scandalous message, “how long is your finger? Or your tongue that is it.” HoodCelebrityy then blasted the reggae star for the dirty comments.

She said, “This is a prime example of an elder who lacks self respect, dignity and morals. This man is the age of your grandfather on here being extremely provocative. Disgusting, can you believe this is the living legend barrington levy.”

Shortly after Celebrityy’s post, Levy came out denying the allegations. His excuse, “it wasn’t me.” The reggae singer, however, went on to apologize for the comments. 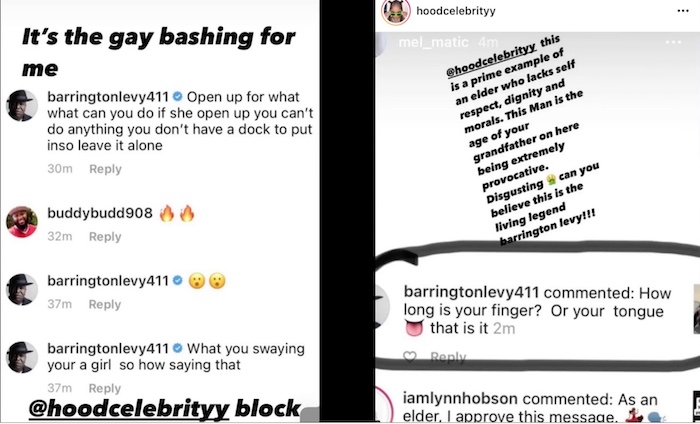 The apology came by way of a video posted on his Instagram page. He begins the video singing “I’m free”, before proceeding with the apology.

In the video, the “Too Experienced” singer says, “Miss HoodCelebrityy, excuse me, my page been hacked. I have nothing to do with whosoever is saying whatever they say. I am not a pervert, I am up and about. Music. Whenever I use social media, I use it for positiveness, not negativity.”

He finished off with, “I don’t dwell in negativity. So miss I am gonna apologize to you in the sense that they used my thing to, whatever they do to your thing. So you have a good day, God bless you and I’m staying in my lane, trust mi and mi nah cross over. Straight inna my lane.”

The apology was welcomed by the entertainer, whose real name is Tina Pinnock. She reposted the video on her Instagram page.

In the caption of the repost, she says, “I respect this from @barringtonlevy411 because I felt very disrespected. I don’t control anyone’s opinion an how they view life to each his own [prayer emoji] but when someone come on my page and leave comments I’m allowed to express myself on my platform.”

The singer continues, “to anyone that knows me know I don’t disrespect anyone I don’t care artist or regular person I treat everyone with respect an love who ever hacked @barringtonlevy411 page is a very nasty disrespectful human being. An I’m sorry this happened to him @barringtonlevy411 thank you so much an I accept your apology LEGEND [heart and prayer emojis] everyone have a bless Sunday.”

Fans on social media had a wild time with the situation as many of them cited that they did not believe someone would hack Levy’s page just to go and post homophobic comments on HoodCelebrityy’s page. Others noted that they had witnessed this behavior from him before and that he was a known “pervert.”

HoodCelebrityy is a Jamaican-born artist who does both Dancehall and Hip-Hop music. She is currently signed to Epic Records and has been steadily promoting her new music on Instagram.

This is the first some of her fans are learning about her sexual preference, and they have remained vigilant in their support of the artiste.