Buju Banton is calling out Jamaica’s athletics association and other members of the upper echelon of society for their hypocrisy. This, after there was an uproar over hand gestures made by ISSA/GraceKennedy Boys’ Athletics Championships Class One 200 meters winner Antonio Watson.

The Petersfield High School student made the gesture (which was interpreted by many to be a gun firing shots) as he finished the 200 meters race at the annual championships last Saturday. While the student later issued an apology, the incident continues to be a hot topic on several social media platforms.

Buju Banton is the latest celebrity to wade into the discussion. In a post on his Instagram account today (May 19), Buju highlighted an image of Britain’s Prince Harry making a similar gesture towards another man. Buju captioned the image, “Hypocrites”.

He continued in the comment section, writing, “Weep you haters of truth. No lies can prosper.”

“And the shills are loose wow how truth hurts. A picture really speaks ???” he asked, while adding, “U bunch of pagan i stand with my own Not your prince Sorry.”

While some agreed with Buju Banton on the issue, many did not see the correlation between the sporting incident and the image of Prince Harry. One critic wrote, “This have no correlation to sports. Sports you have to be a good sportsman. Propaganda. Keep up this energy and people will get tired of it.”

Buju is not the only entertainer that has commented on the incident. Earlier this week, Ce’Cile gave her controversial opinion on the situation. In a comment responding to the athlete’s apology, she wrote, “I think this is a teachable moment and we need these so others and this young man can learn. What you do on the corner with your friends in jest cannot be done on this stage. I think the apology is enough and I think lots of us can learn from this.”

Some fellow commenters were not here for Ce’Cile’s comment and told her to stick with what she knew best music. One commenter told the artiste, “Clearly u never do any sports inna all a u life. Lady go record a song n shut up. Kmt.”

The Dancehall artiste responded to the shady comment saying, “You obviously don’t know about being a business person or protecting ur bag. Look at you with a business… that needs costumers… potentially Me.. and here u are. I think you need a teachable moment yourself. I am going to check out your business though. Maybe I swing buy and print some shirts just to teach you something. I actually need 500.”

In another twist, however, Usain Bolt defended Watson and his use of the gesture, agreeing with Ce’Cile that it was indeed a teachable moment. 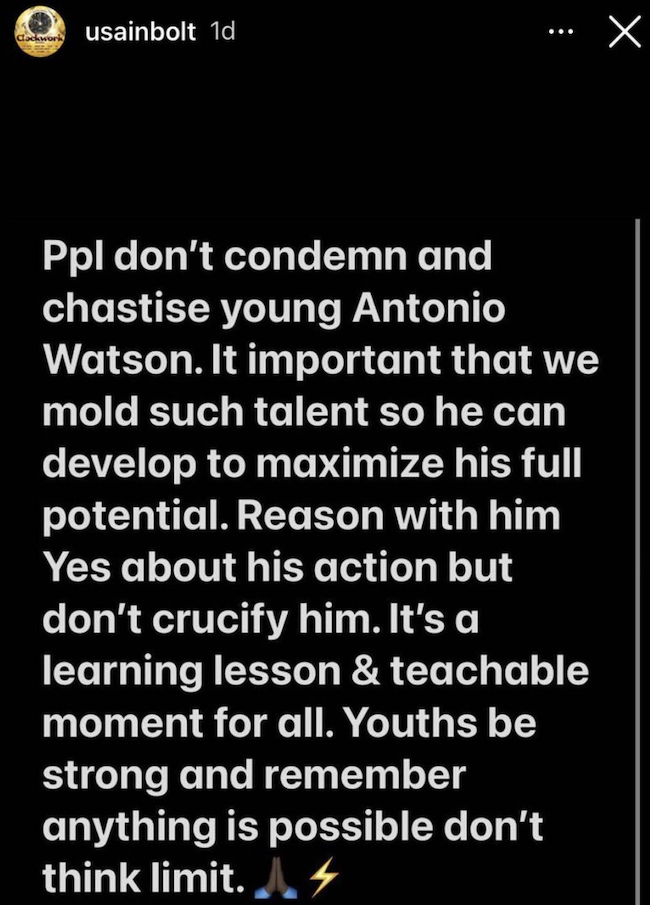 In a post on his Instagram story, Bolt wrote, “Ppl don’t condemn and chastise young Antonio Watson. It is important that we mold such young talent so he can develop to maximize his full potential.”

He continued, “Reason with him yes about his action but don’t crucify him. It’s a learning lesson and teachable moment for all.”