NBA YoungBoy pens letter to fans, and mother of his child, Jazlyn Mychelle

NBA Youngboy has confirmed that he is expecting his 8th child. The confirmation came on Friday (May 14) by way of a letter purportedly from the rapper, which was posted to the Instagram page of his manager. NBA is currently incarcerated on charges of possession of firearms as a convicted felon and possession of a firearm that is not registered.

Since his incarceration, the rapper has been communicating with fans on the outside world through letters. Last month, he wrote a letter addressing his critics, among them talk show host Wendy Williams. Wendy had spoken on NBA Youngboy’s arrest, saying he had to go to jail and that he needed to be careful as he had seven young kids to care for.

In response to Wendy’s criticism, YoungBoy wrote, “I can leave my kids millions of dollars to divide but can’t give them the time they truly deserve.”

NBA YoungBoy continued, “Nobody understand me they never did sh*t some times I don’t understand myself but that’s fine because I’m okay I ain’t looking for you to feel sorry I just ask for one thing- For you to let me suffer in peace tell MS. WENDY WILLIAM I say she got a good soul and she’s a beautiful women I can see that threw all the bad comments thrown at her tell her count her blessings (STAY IN GOOD SPIRIT) Sincerely Kentrell.”

In his latest letter, the rapper, whose real name is Kentrell Gaulden, speaks on the people around him suggests that he has nobody to support him in his time of need.

“I have a hard time paying attention i then gave and i then been there for people without having nobody to be there for me even with people i talk to now if they wasn’t waiting to receive or been giving something already they wouldn’t be here,” he wrote.

The letter continues, “Im a man before anything I had to apologize to myself for not protecting my heart and allowing most of this to happen i read letters from my supporters and find joy inside and yes i said that right (my supporters) yall are not fans we scream F.A.N together (f*ck a n*gga) LOL.”

He addressed persons speaking on his name and asked them to stop. “but all jokes aside,” he writes, “i ain’t got nothing against nobody i dont want no problem neither just stop speaking on me we don’t concern each other.”

That was followed by the confirmation of another child on the way, this time with his latest flame Jazlyn Mychelle. “I really just want to be there when my daughter born i want to be in the same house as her while she grow up i never had that experience,” he wrote.

He further apologized to his girlfriend for his previous actions with other women and promised to be there once she did not leave him. “Jaz im sorry (ma’ma) I promise im sorry for every time i said something to another woman for every time they ever gotten the chance to come around ill give you anything for you not to leave anything to have you when its all said and done.”

It’s clear that the rapper is feeling vulnerable about his relationship, but by all indications, Jazlyn will be sticking by her man. Since his incarceration, she has posted several throwback images and videos of the two, alongside the hashtag “free him.” 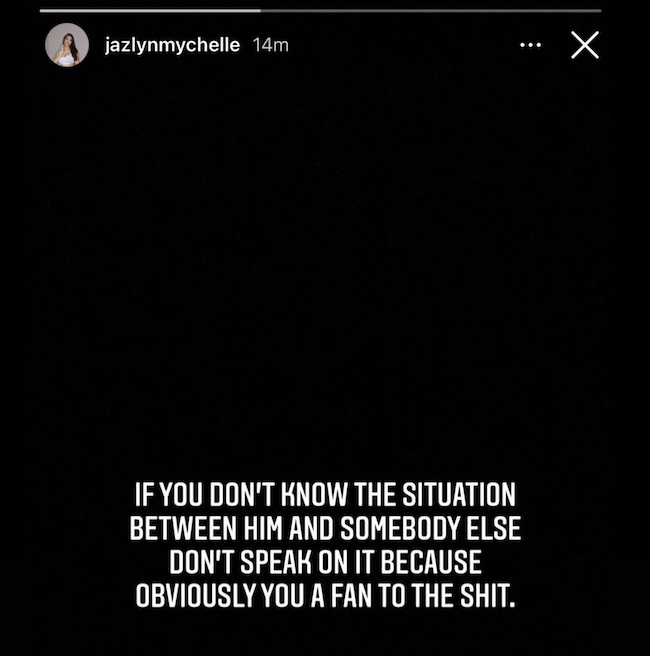 Jazlyn Mychelle has since responded to fans saying, “If you don’t know the situation between him and somebody else don’t speak on it because obviously you a fan to the sh*t.”

NBA is expected to appear in court in June to answer to the gun charges against him. Until then, he remains locked up at a facility in Louisiana.