Ever since emerging on the scene, Skillibeng has shown all the qualities of becoming a master of the dancehall genre. He’s managed to cop some impressive collaborations along the way, including top dancehall acts like Dre Island, Tommy Lee Sparta, and dancehall superstar Popcaan. Now he’s looking to take his music to an international level and has announced his biggest potential upcoming collab to date, a freestyle remix of his massive hit “Crocodile Teeth” with multi-platinum rapper Nicki Minaj.

He revealed the exciting news on Instagram with the caption: “50,000 comments.” Fans immediately began to react to the news. Lila Ike, who he has a track with, said: “Run dat fuuuuh,” while Shenseea and Shaneil Muir added flame emojis to show their support while ShenYeng calls it a “big look”. The post, which was made a short while ago today, May 8, has already been liked over 50,000 times.

“Yuh wicked more Dan Weh me tink,” one fan said, while another added, “Happy for you and Jamaica when you win everyone wins.” This fan chimed in with enthusiasm, “This ago sick when it drop mi gad.” 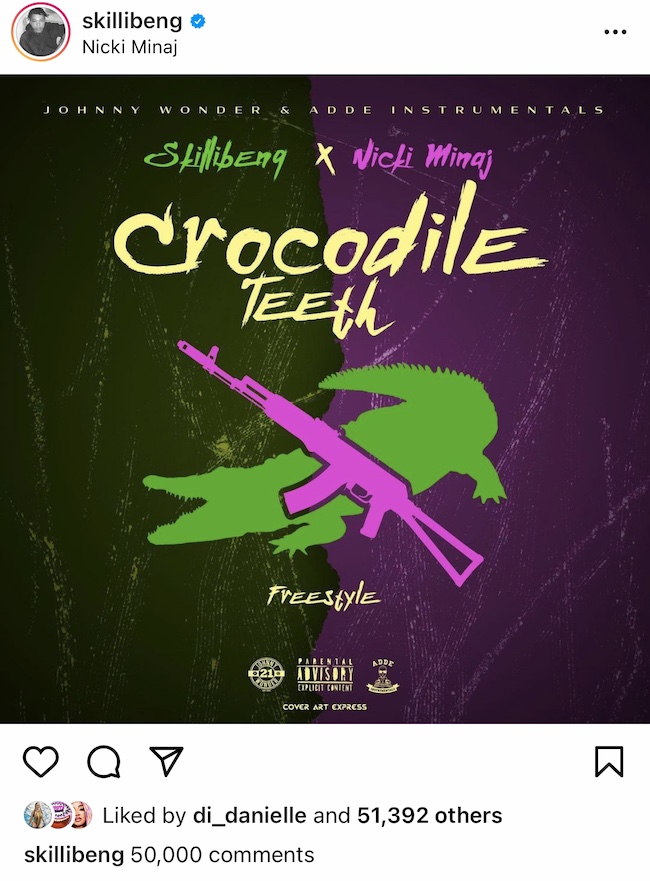 The track has already been massively successful on YouTube and has already brought in over 18 million views since it was released in October 2020. Just last week, Canadian rapper Tory teased a new track he recorded on the Skillibeng’s “Crocodile Teeth” riddim, an indicator of how popular the track keeps getting.

Lanez shared a clip of the track on Instagram and captioned it “@skillibeng #CrocodileTeeth …… should I drop this or leave this in the stash? … I think it’s fire tho … word to @ovoroxx cornrows.” The Esyde artist has enjoyed mostly positive feedback from fans ever since his break out hit “Brik Pan Brik” in 2019. That song has about seven million views.

Nicki Minaj, who has strong Caribbean roots through her birthplace Trinidad, has been quiet for a while now since she’s chosen to focus on her new family, but if she’s thinking about making a come back soon, then this collaboration is sure to produce some heat.

While Skillibeng is relatively new to the music, Nicki Minaj has been around for over a decade and is to date one of the most commercially successful rappers of all-time and perhaps the most success female rapper ever. She has sold over 137 million records worldwide. Despite not releasing any new music this year, her song “LLC” climb to No. 1 on the chart after her fans started pushing the single.