Vybz Kartel is pushing back against the notion that dancehall artists are the primary cultivators and facilitators of crime in Jamaica. The incarcerated dancehall legend recently shared on his Instagram Story his views from another angle on the notion that crime has a strong correlation with violent dancehall music.

After being behind bars for the past decade, Vybz Kartel has a good knowledge of who makes up the prison population, and one thing is very clear, dancehall artists are in the minority.

The post from Vybz Kartel’s page comes after PM Holness reignited the debate about dancehall playing a key role in high crime. The debate was sparked after Prime Minister Andrew Holness gave a statement in parliament on March 30, lashing out at artists who he said glorified violence in their music. The Prime Minister concluded that these lyrics have a negative impact on the nation’s children. 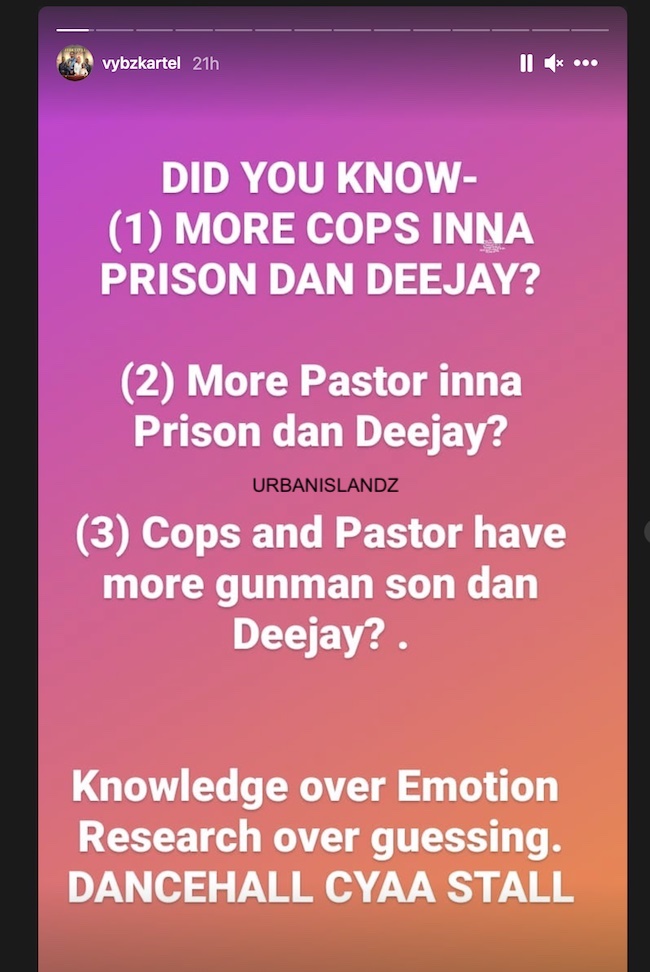 According to PM Holness, these artists were neglecting their duties to society. He added, “In our music and our culture, in as much as you are free to reflect what is happening in the society, you also have a duty to place it in context.”

Needless to say, the leader’s comments did not sit well with some of music’s biggest names. Deejays such as Baby Cham, Mavado, Bounty Killer, and Vybz Kartel are a few of the entertainers who have out the government for corruption, among other injustices, all while defending their profession.

Kartel is the latest to offer commentary on the situation. The deejay who has been incarcerated since 2014 on a murder charge may just be the best person to share statistics of life behind bars. Kartel is serving a life sentence for the murder of Clive “Lizard” Williams and will be eligible for parole after 35 years.

Despite being imprisoned, he has remained active in the music industry, releasing dozens of songs each year since his incarceration. His social media pages have also remained active, with commentary seemingly from the artiste being posted on the regular.

Fans of the deejay have waded into the discussion, sharing their views on the topic. One fan on YouTube wrote, “Talk true, these things we know, but them try Fe hide them , but try to make dancehall artist look bad.” Another user said, “The world boss speaking Facts.”

Regardless of the opinions of the masses, dancehall artists continue to be incarcerated at an alarming rate. Tommy Lee Sparta, Laden, Ninja Man, and Vybz Kartel are just a few well-known entertainers who are currently incarcerated for various crimes ranging from murder to illegal possession of firearms. Still, this doesn’t substantiate the notion that dancehall contributes or cause crime. While there is an argument to be made on both sides of the divide, research has shown that there are no direct correlation between criminal activity and lyrical content in music.

Vybz Kartel had appealed his conviction but was turned down by the nation’s Court Of Appeal. His attorneys have indicated that they will be taking his appeal to Jamaica’s highest court, the Privy Council in England.