Romeich Major revealed that he, Shenssea, and the rest of her team have gotten vaccinated and that the rest of the Romeich Entertainment Team will do the same soon.

So far, it has been confirmed that dancehall artiste Shenseea, DJ Blackboi, and Romeich Major from the team have been vaccinated. The producer posted a video of his inoculation on Instagram and captioned, “People in a time like this you have to get your vaccine because this is just the way to make the world better. You might not agree with it but a just so the system stay we have to do what is needed, might not be what we want to do, but its what we need to do.”

He continued, “Today team #shenyeng took our vaccine and team #romeichentertainment will do the same once vaccine is available where ever they are in the world.”

Romeich and the team have been endorsing the Government of Jamaica’s efforts to control the spread of the coronavirus over some time. He has made appearances on social media urging fans to stay safe, social distance, and vaccinate when possible. 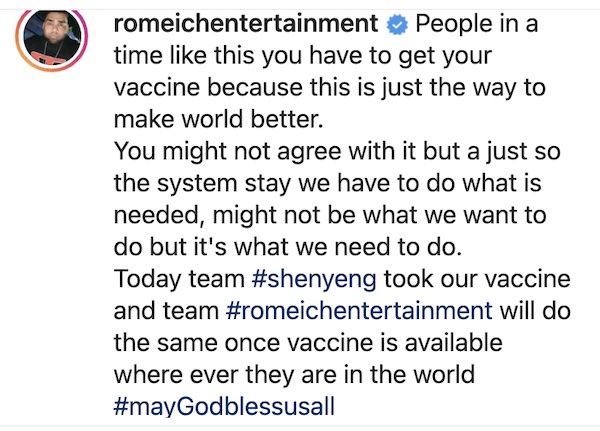 Romeich artiste, Shenseea also showed support by doing an advertisement for the GOJ promoting the wearing of masks, along with other measures the government had put in place. However, the “Bad Habit” singer came under fire from the public soon after, as she later performed at a number of international shows without wearing a mask or social distancing herself.

The coronavirus pandemic has plunged the entertainment industry like never before. Along with Shenseea, other artists, including Queen of Dancehall, Spice, and Konshens, had made it known that they have been losing profits during this difficult time. Still, there have been speculations and uncertainty surrounding the safety of vaccines by the general public. Romeich and his team are some of the first members of the entertainment industry to step up to be inoculated.

This comes at a time when some other dancehall entertainers like Buju Banton, Sizzla, and Spragga Benz have been vocal against the vaccine and other measures implemented by the Jamaican government.

Romeich has since deleted the video from his IG