Kylie Jenner has set the record straight amid all the backlash from her sharing her former makeup artist’s Gofundme page.

Over the weekend, Kylie Jenner caught some slack from fans online for sharing a Gofundme page aimed at raising money for a makeup artist she used to work with who was recently in an accident. According to the fundraiser that was started by makeup artist Samuel Rauda’s family, he has a long recovery road ahead, and they are seeking funds to help with his medical expenses.

Some fans were taken aback when Jenner posted the Gofundme link on her social media, as they figured someone, as loaded as the cosmetics mogul, could easily cover the costs herself. As audacious as it sounds, Kylie was forced to address these concerns on Monday and clear up a few misconceptions. “I feel it’s important for me to clear this false narrative that i’ve asked fans for money and am not paying for my makeup artist’s medical bills,” she began. “Sam isn’t my makeup artist and unfortunately we don’t have a personal relationship anymore but i have worked with him a few years ago and i think he’s the sweetest.”

Rauda was reportedly in an accident and suffered major injuries causing him to undergo surgery on Sunday, March 14. Jenner reportedly learned this from her current makeup artist Ariel Tejada “After learning in more detail about the accident it compelled me to visit his gofundme which was set at 10k. They had already raised 6k and i put in 5k to reach their original goal and thought i’d post it on my stories to raise more awareness if anyone also felt compelled to share and donated,” Kylie Jenner further explained in her Instagram Story.

“I don’t know how all of this got so twisted but his family has reached out through Ariel and are very appreciative of all the donations, prayers, and love towards Sam,” she continued. “Anyone that knows me knows that I do things from the heart and try to be helpful whenever I can.” 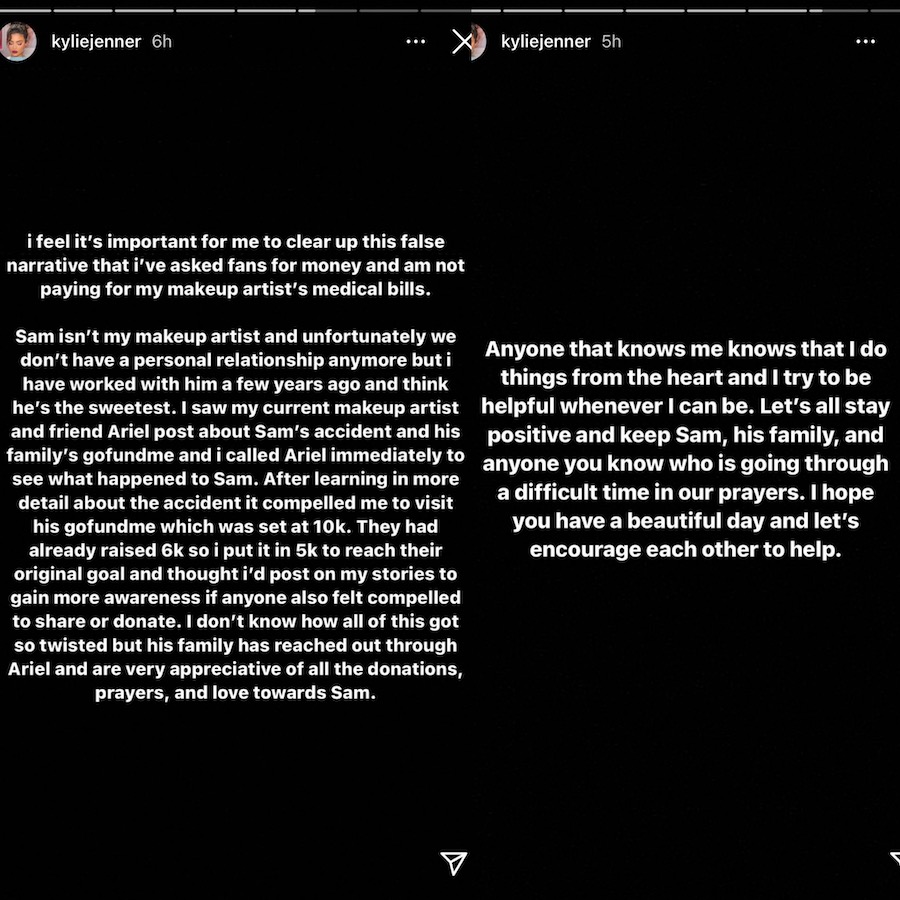 Kylie Jenner was grossly criticized by fans for requesting funds from the working class while she has a reported net worth of around $900 million. Meanwhile, since she shared the link to the fundraiser, Rauda’s family has raised nearly $100,000 of their new $120,000 goal.

Asian Doll was one of the few celebrities who defended Kylie against incensed fans when she spoke out on Twitter about wealthy people not being obligated to “do for you” just because they have it. “People mad at Kylie for raising 60k for her makeup artist instead of giving him 60k cause she rich,” Asian Doll tweeted on Sunday (March 21). “Either way he got 60k right ? Even if she ain’t personally give it to him he still got it from HER supporters meanwhile your friend won’t even take you to your job orientation.”

The rapper then addressed some retorts from fans, including one who wrote, “But if she really cared for her friend she would pay for it right?” Asian Doll explained that it was generous of Kylie to even help raise money for Rauda and asked, “do your boss pay your medical bills?” In a separate tweet, she added, “I don’t give a f**k what nobody say people with money is not obligated to do for you just because they got it & you can’t get mad at what somebody do with THEY MONEY.”

People mad at Kylie for raising 60k for her makeup artist instead of giving him 60k cause she rich ??

Either way he got 60k right ? Even if she ain’t personally give it to him he still got it from HER supporters meanwhile your friend won’t even take you to your job orientation

As Jenner clarified, she did not start the Gofundme page, she just raised awareness about it and donated to it herself. Also, Samuel Rauda does not work for her but has worked with her in the past. Do you think Kylie was right to share the Gofundme page, which helped to surpass the family’s original goal by 900%, or should she have offered to pay it herself?