A Boogie Wit Da Hoodie shared a breakup message for his girlfriend, Ella Bands, on Instagram.

Last month, Urban Islandz reported that Ella Bands tweeted that she was ready to be single. Her message came as a huge surprise since most fans felt like she and A Boogie Wit Da Hoodie are couples goals. Fast forward a month later, and Boogie shared a message on his Instagram storytelling her she is free to go. The heartfelt message is already making the rounds on gossip blogs, but most folks are rooting for them to work things out and stay together.

“As much as I don’t wanna admit it, I don’t deserve you @slaybyella_,” Boogie wrote. “You have a beautiful long life ahead of you and I don’t wanna be the reason you’re not happy Be free – go be what you truly want to be.”

A Boogie Wit Da Hoodie and Ella Bands have been together for several years and have a daughter and a son together. Ella has since responded to his message, telling her followers that it was her idea for them to be separated. 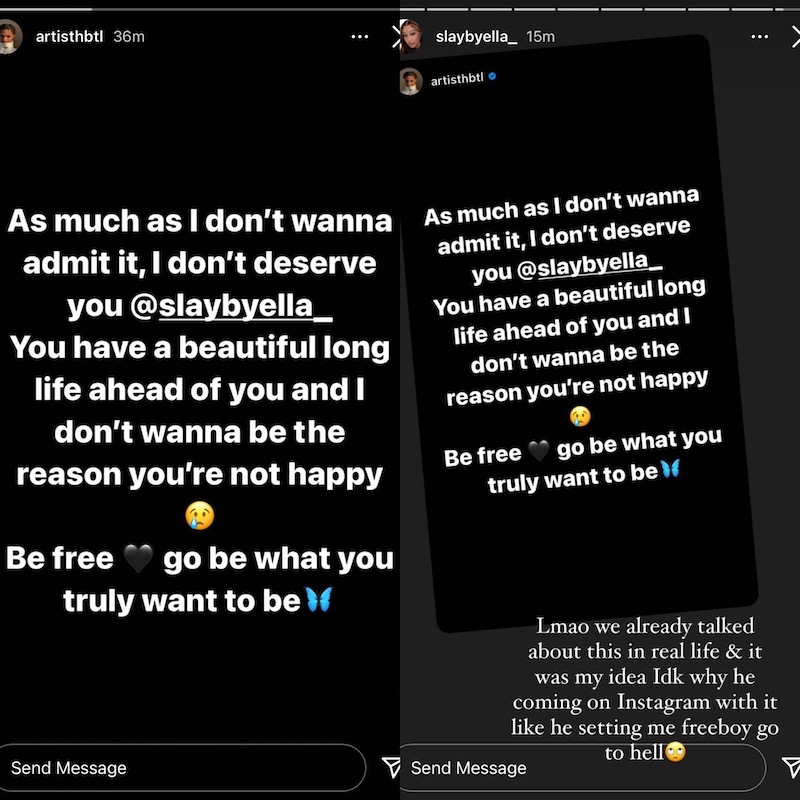 “Lmao we already talked about this in real life & it was my idea Idk why he coming on Instagram with it like he setting me freeboy go to hell,” she wrote.

Back in November 2019, A Boogie announced that he would be taking a break from music after his next album, Artist 2.0, which was released on February 14, 2020. While he didn’t specify why he was taking a musical break, fans theorized that he wanted to spend some time with his family and perhaps make amends with his girlfriend, Ella.

“This might be my last project for a while…There’s a lot of things I wanna do in life and it’s moving too fast for me to focus on everything at once,” he said in his announcement.

Treat me right, I do the same