Swizz Beatz and Timbaland have responded to Michael Rainey Jr., who called them sellouts after they announced that they had sold the Verzuz Franchise to Triller. Triller is an entertainment and music platform with a social video editor. The app is often compared to TikTok as it allows you to create videos with music seamlessly.

On his Instagram account Michael Rainey Jr. known for his performances in 50 Cent’s Power series called out the two senior members of the hip hop fraternity.

“Sellouts [face palm], can’t ever jus have something of our own it’s always bout the money,” he said in one story, adding “cool move but these n***as still sellouts.”

The African American community has been on edge this week since Jay-Z announced the sale of Tidal to Jack Dorsey’s Square. It doesn’t matter that Tidal may have plateaued for lack of support from the same fans. They shared their upset reactions as they accused Jay-Z of using the black community to build up support for his various business ventures, only to end up selling it to a white man.

According to Rainey, he felt “the same way about Jay-Z selling Tidal so don’t come to me wit that argument,” and said that his opinions were made because he felt that black-owned creations and businesses is always better when the owners “keep it within the fam.”

“Gotta start a new beginning some how [sic],” he added.

Swizz Beatz and Timbaland quickly responded to Rainey Jr’s accusation saying they actually own Triller. “But we own Triller,” Swizz Beatz commented on Instagram. “We own everything tell who done that,” Timbaland added. 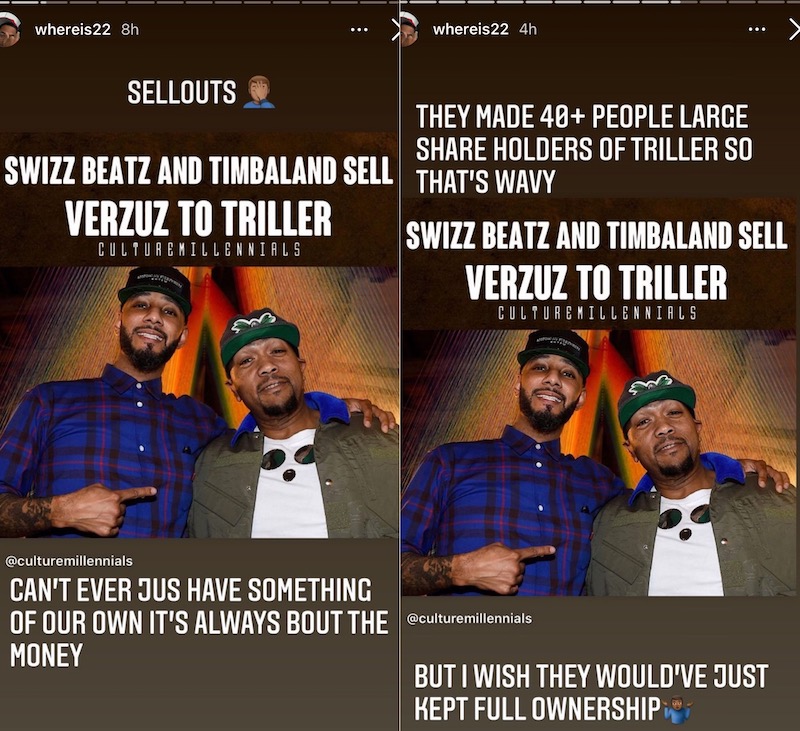 Fans were puzzled by the responses by the two legendary rappers as they questioned what actually took place. “You sold it to yourself?” one Instagram user commented.

Many who commented on the fiasco questioned the true ownership of Triller now with the acquisition of Verzuz.

The deal, as reported by news outlets, reveals that following the acquisition, Swizz Beatz and Timbaland will become shareholders in Triller’s parent company Triller Network. The deal is also said to see Swizz Beatz and Timbaland giving a portion of their equity stake to 43 performers who participated in Verzuz, including Beatz’s wife Alicia Keys, DMZ, Bounty Killer, and Beenie Man, among others.

While it appears that, in fact, Swizz Beatz and Timbaland do own equity in Triller, they are the owners of the company, as their statements suggest.

According to the L.A. Times, the listed Founder for Triller is David Leiberman, while the Chairman and CEO is Mike Lu. The company is now said to be majority owned by Proxima Media which is owned by moviemaker Ryan Kavanaugh. This would mean that Swizz and Timbaland are co-owners, although it is unsure how much percentage of the company they actually own.

In the meantime, the app’s addition of the Verzuz brand could mean the entertainment value of Verzuz, and its faithful following will be featured on the app, which is seeking to be “kind of the MTV of this generation, according to Bonin Bough, Triller’s Chief Growth Officer.

However, it is yet to be seen if black consumers will act on their sentiments towards the deal, which could be damaging for the company and the Verzuz brand.