Spice has some cooking tips for the Kardashian kids! In videos released by Kim Kardashian, North West, her oldest daughter is showing off her cooking skills in a video that also shows how surprisingly grown the children are becoming.

For many on the internet, this might come as a surprise, having seen North West, Kim Kardashian’s oldest daughter with Kanye West, as a baby bump then as an infant, followed by years of cute photos and videos of her as a vivacious little girl.

Well, North likes cooking, and she is all about her Ramen noodles, but Spice has some advice for making the noodles taste delicious.

In a comment to the post of North Cooking- Spice says, “Kim please teach this pretty little princess to add seasoning in pot after noodles are ready.” Many fans under Spice’s comment thread agreed with her, even though some disputed the correct way to make noodles being the way a person prefers it rather than how others do it. 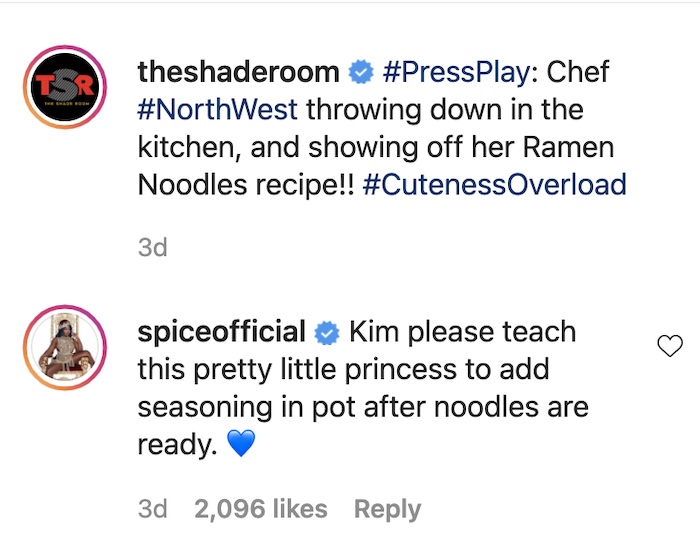 “Everyone makes it different. To each their own. Mind Y’all business,” one person commented.

In the video, the Kardashian cousins are seen standing around the stove while Chicago and Dream can be seen sitting on a tabletop counter next to the hot pot and fire. Kim Kardashian is, however, heard telling them, “you can be near the fire,” as they get down.

North also shows off her cooking skills as she shows Kim how to mash the noodles as it sits in the pot along with the seasoning even though the water is not boiling as yet.

Meanwhile, some fans found the kids cooking to be cute and surprising that they actually eat Ramen noodles.

Kim Kardashian has been spending a lot more time with her children amid her split from Kanye West. The reality star/makeup mogul officially filed for divorce from the rap icon last week. She’s asking for joint custody of their children and has reportedly already reached a property settlement, a clear sign that she doesn’t want the divorce process to get messy.