It seems DaBaby and DaniLeigh can no longer refer to their love as a “Masterpiece” as they have severed ties just ahead of Valentine’s Day.

DaBaby and DaniLeigh’s rocky relationship has been littered with ups and downs and has served as a full course meal of drama for their fans. The pair previously closed the book on their budding relationship back in 2020 when Dani declared that she was choosing to impart on a new journey and a new chapter in her life. Many ridiculed the singer noting that she was crazy to have thought their relationship would last, as DaBaby seems to be quite entangled with the mother of his daughter, MeMe.

Ironically enough, the “Bop” rapper reunited with the curly-haired blonde bombshell for the start of the new year to everyone’s amazement. This time there was no doubt as they flaunted their passionate love all over social media. You could find them posting numerous photos and videos of each other as well as dropping sweet comments on each other’s posts. She even starred as the leading lady in the video for his song “Masterpiece,” which is an ode to their relationship. Fans were quick to point out that DaniLeigh was giving off strong “pick me” vibes, but the “Easy” singer ignored all the hate and kicked things up a notch.

Two weeks ago, she released a track titled “Yellow Bone” and came under heavy fire as many accused her of colorism. Addressing the backlash, DaniLeigh simply expressed that she was just speaking on what her partner DaBaby prefers. “That’s what he wants, that’s what he has,” she stated.

Today fans took the very same words out of her mouth to mock and ridicule the singer as she took to her Instagram story and proclaimed, “Officially single,” along with a black heart emoji. 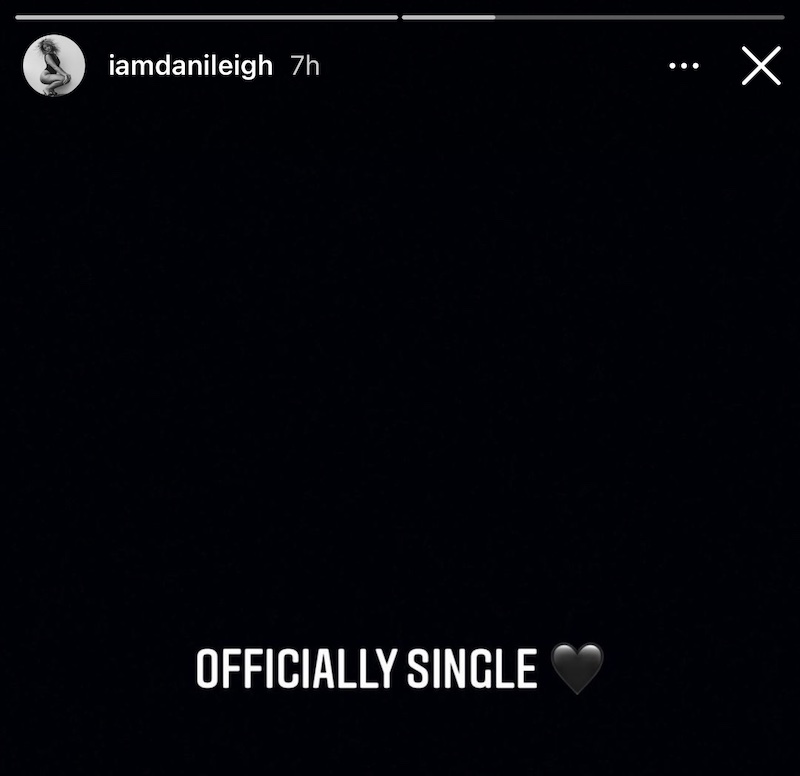 One Twitter user reacted, noting, “So the Dani Leigh girl made that colorist anthem only to end up single??? All that showing off and he’s already moved on? Lmaoooooooooo lacked respect yourselves. These men don’t miss a chance to take you fi eediat,” while another added, “Looooooool so danileigh made that song about her man wanting her cos her bones are yellow and what not and now she’s single?”

Twitter and Instagram users are in a frenzy over the situation. To make matters worse, DaBaby also seemingly co-signed the separation as he seeks a date for Valentine’s Day. Reposting a TikTok done by India Love showcasing her take on the Masterpiece challenge, DaBaby wrote, “This Tik Tok is a #Masterpiece @indialove.” He added to that bit of admiration by adding a goat emoji.

He continued, “Morning, Best re-enactment of this Tik Tok gets flown out for a date w/ Baby on Valentine’s Day.” The rapper mentioned he would be selecting the winner on February 12. It is also worth mentioning that they have both unfollowed each other on Instagram.

Do you believe that their relationship is over for good this time, or do you see the “hardest couple in the game” rekindling their love in the future?