Lila Iké might be on vacation in Mexico as she continues to celebrate the beginning of her 27th year of life, but she does have the time to clap back to errant misinformed fans. The artiste shared a snippet of her Mexico vacation and ended up defending her choice to partake in the ritual after one of her followers accused her of romanticizing native cultures as good while they are not.

The ‘Second Chance’ singer has been sharing snippets of her Mexico vacation as she celebrates her birthday. One of the activities she has done is an age-old indigenous practice that is meant to purify the body and mind.

On Instagram, Lila Iké shared that she enjoyed the “Temazcal’ ceremony, which was performed by Mayan Indians in Mexico. “This is a pre Hispanic practice by indigenous people where volcanic rocks are heated in a fire and brought inside a pyramid- sprinkled with different essential oils and herbs which creates a steam which you sit in for at least an hour.”

Lila Iké explains, “this process was usually used to heal the sick, after battle and often women would deliver their babies in them. It is usually referred to as the “womb of the earth.”. Definitely an amazing experience I sang the whole time…BEST WAY TO RING IN 27,” she said.

One commenter on her post, however, did not like Lila partaking in the activity as they commented on her partaking in an activity that is rooted in evil. “there is a current trend to romanticized [sic] the native cultures as if the were all good and righteous when in fact the they were NOT. The Mayans were notorious for their human and animal sacrifices, blood thirst and heart removal, pre Hispanic Mexico was indeed dreaded than the colonisers themselves but I guess is not trendy to accept the true [sic] in this times, I guess when all this was happening back then Christians might have been viewed as the solution to this barbaric culture however it was not as they too made atrocities, still ics look very beautiful indeed.”

Lila Ike, however, asserted the right to enjoy any practice she enjoys “bredda I wasn’t there they may have very well been just like the evil that is present even now. I merely went into a pyramid and sweat and hold a medz allow me the opportunity to express my gratitude for my PERSONAL experience.” 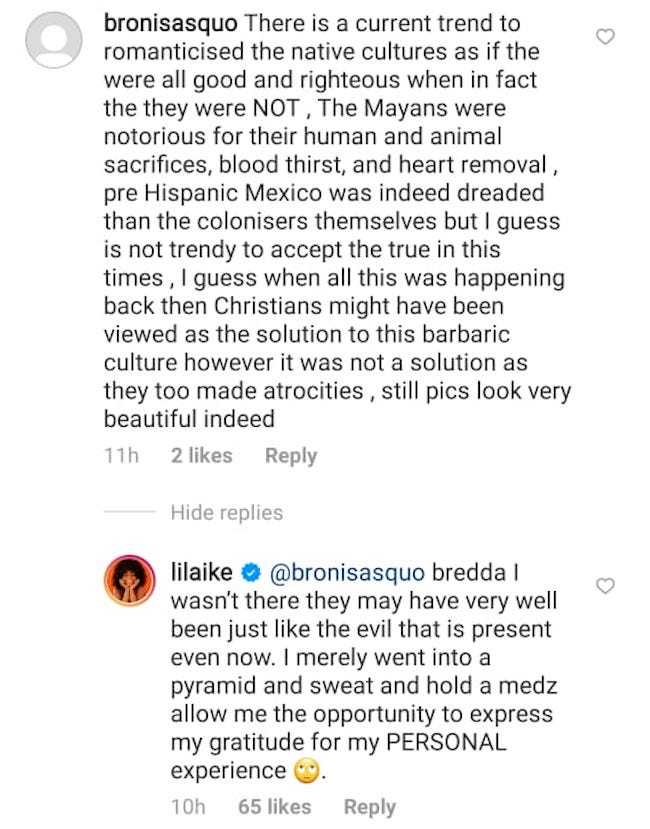 The artiste also shared enthralling photos of the Mayans that facilitated her experience- posing in front of the pyramid along with the Mayans who are dressed in traditional outfits along with cultural headdress, tattoos, and traditional jewelry. Meanwhile, other fans of the artiste commended her for taking care of her mind, body, and soul.

Another shared that the ritual was a serious one “I’ve done the sweat lodge and thought I was gonna break the ceremony…But I dug deep and sucked in the heat until I started to see things (which I was later told that its expected and that its an ancestor). A high for sure,” he said.

Others commended the artiste for immersing in other cultures, not just being a tourist and enjoying the shallow things about tourism.