Famous Dex has checked himself into rehab following a viral video where he appears to be high on drugs and dazed.

Before going to rehab, Famous Dex tried to rubbish claims that he’s on hard drugs. He addressed the issue on Instagram Live yesterday, December 20. Fans began to raise an alarm after a photo of the rapper looking like he was under some sort of heavy drug influence hit the net. The Chicago rapper’s Live was to deal with the issue though he may have been under the influence of something at the time of filming.

In the clip, which made the rounds on social media, he is seen holding what appears to be a blunt, and his words are slurred. At one point, he is barely coherent.
“Hey fam, I really don’t need you to be saying sh*t like this, bro.” He then added, “Let me tell you something, I want to address this to everybody that’s listening to me. Stop worrying the next muthaf**ka that’s doing drugs [inaudible]. The world on drugs, you know what I’m sayin’? I used to love doing whatever,” he said.

He then seemed to target his fans with anger calling them goofy for worrying about him.

The issue soon began to trend on Twitter, with many fans questioning why he would rebuke them for their concern. This fan posted, “Famous Dex addresses the drug rumors… By saying he doesn’t do drugs ? he also said stop worrying about him and if you’re worried about him you’re just a ‘goofy a*s bi#ch’”, along with a clip of the Live.

Famous Dex addresses the drug rumors… By saying he doesn't do drugs ? he also said stop worrying about him and if you're worried about him you're just a 'goofy ass bitch' pic.twitter.com/f5tdSms7hw

Later on in the day, the rapper revealed that he had a heart to heart with NLE Choppa more than likely about the issue. However, he didn’t explicitly state that. “Just had a big FaceTime with my brother @Nlechoppa1,” he tweeted and added, “Thanks king god is so good.” He also posted, “My brother @Nlechoppa1” alongside a screenshot of their FaceTime call.

Just had a big FaceTime with my brother @Nlechoppa1 thanks king god is so good ?

Information revealed today, December 21, by AllHipHop, suggests that Famous Dex has decided to get help for his addictions. According to the publication, he has entered into rehab, even though the reason has not been confirmed. It seemed that the rapper had a tough weekend dealing with his demons as on Saturday, he also posted images of new tattoos that said “Sad” and “Love.” He also tweeted, “I don’t wanna smile no more.”

Famous Dex posted on his Instagram story telling fans that he will “be back soon.” He also added some heart emojis. 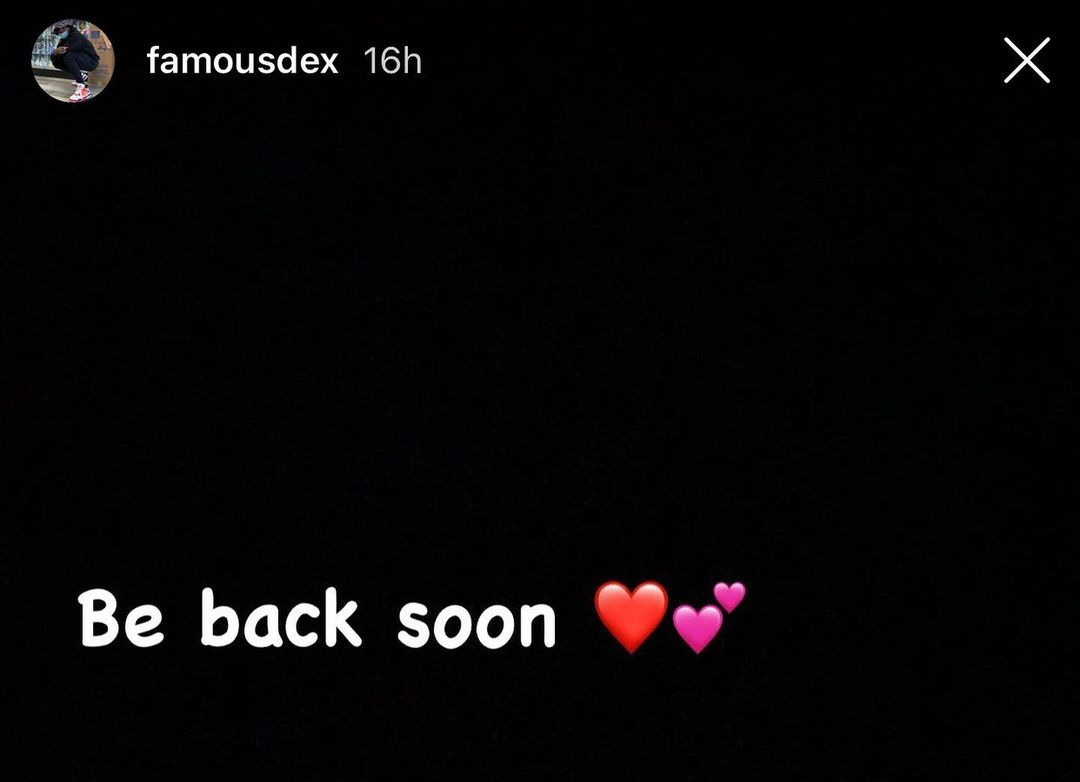 Just last month, the 18-year-old NLE Chopper also tweeted in support of Dex and asked 300 Entertainment to help their artist.

“I’ve never been the type to be in folks business but @300 y’all see @FamousDex obviously on drugs too heavy,” he said. He added “Can y’all at least try surrounding that man around somebody with his best interest. Help dude out, or somebody who already is in his ear uplift dude he NEEDING it.”

Fans know that he’s struggled with drugs before, and in 2019 he experienced a seizure at 1OAK in West Hollywood, California, during a performance.

It may be the first time that he’s accepted that it’s time for a change. In 2018 he defended himself as fans thought he was doing hard drugs when he nodded off in an Instagram Live session. At that time, he said, “I always know. Only you know — not my manager, not anybody. You know you. With that being said, I ain’t got nothing to explain. The video that’s right now going viral, that’s kind of so stupid? For one, I’m a human being and I work my a** off. And once you put overtime, overnight and then you come back home at 4 something in the morning and you decide to go live — hey. Don’t let the world trick you and be fooled.”

According to the source, he was taken to rehab following the incident. He was transported in a Rolls Royce, and the hope is that he will get the help that he needs.