Vanessa Bryant, the wife of late basketball legend Kobe Bryant, is finally speaking out as her mother takes her to court for monies she says she is owed for assisting with childcare.

The bitter family feud was reported by TMZ where Bryant’s mother Sofia Laine is suing her daughter for $5 million for being a babysitter and assisting with childcare in the Bryant home. She also claims for unpaid hours as an assistant and claims that Kobe promised support, which she now intends to claim for.

“Unfortunately, Kobe Bryant’s promise did not see the light of day as he is now deceased and Vanessa Bryant took each and every step she could to void and cancel all of Kobe’s promises,” Laine’s lawsuit claims.

The Bryant family continues to mourn the deaths of Kobe Bryant and his daughter Gianna. Kobe, along with his second-oldest daughter Gianna and seven others died on January 26 when the helicopter they were being transported in crashed in the hills of Calabasas, California. 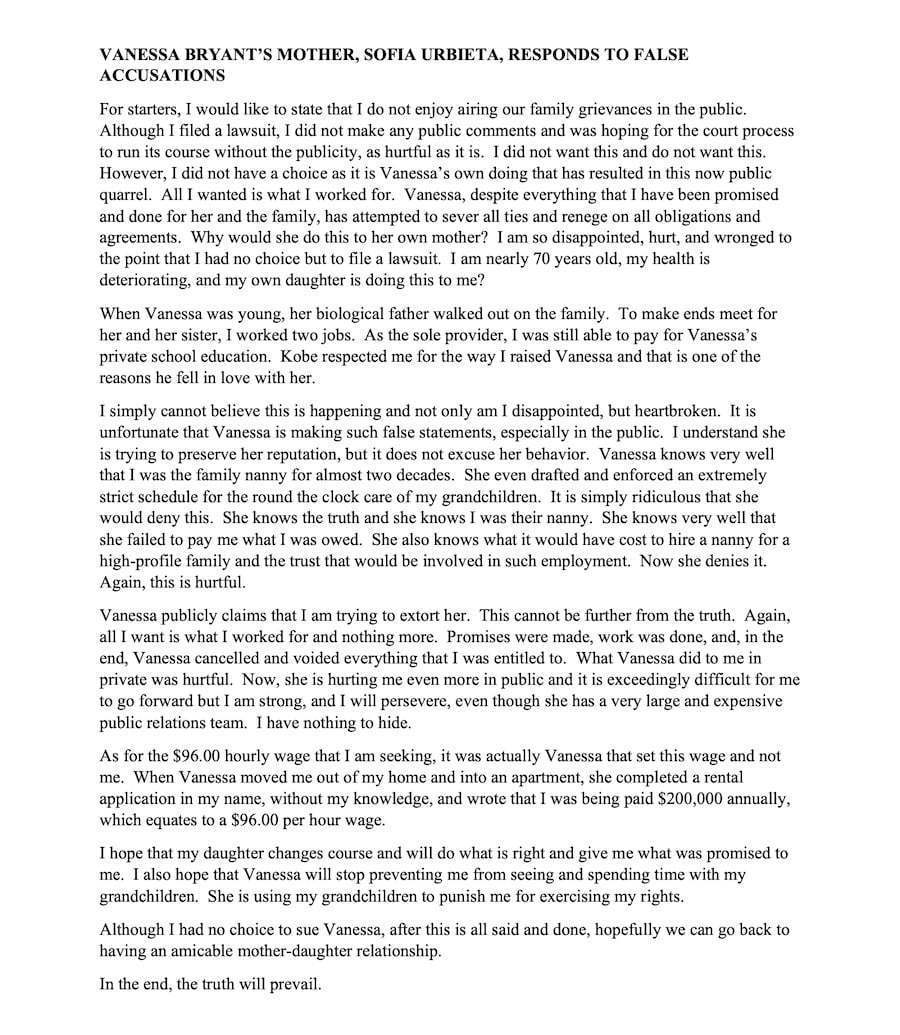 Kobe and Vanessa are parents to four daughters. The youngest of the family just turned two as Vanessa takes on the role of a single mother in raising her three remaining daughters. According to financial experts, Kobe died, leaving Vanessa as the heir to a $600 million dollar estate.

Vanessa has responded to the lawsuit and says her mother is greedy. “My mother is continuing to try and find ways to extort a financial windfall from our family.”

She said that over the last 20 years, she and her husband had always financially supported her mother – “I have supported her for nearly twenty years, and she was never my or Kobe’s personal assistant, nor was she a nanny. I have always been a stay-at-home mother and my husband and I were our daughter’s full-time caregivers.”

According to Vanessa, her mother has benefitted from Kobe’s rising success over the years. “For nearly two decades we arranged for my mother to live in our nearby properties, at no cost to her because she had claimed that she didn’t have any money to buy her own home after her divorce.”

She added that Laine lived in one of their Newport Beach Coast property, and she was financially supported by the Bryant’s. Vanessa Bryant also said she has been looking for a new home for her 68-year-old mother but that her mother had gone to the media and gave an interview claiming that she was being forced out f her home and to return a luxury car. She said even though her mother had been making damaging allegations, she still offered to pay her monthly expenses for the rest of her life but that Laine wasn’t happy with that.

Bryant has also previously shared that her mother lived off of her and Kobe and alimony she receives as part of a divorce settlement.