Vybz Kartel is legendary in his own right, but while many marvels at his musical genius, few recognize what a masterstroke business man he is in the music industry and how influential he is to many fields in art and culture. From strategic collaborations to cross over language or genres, the Fever artiste cannot be stopped, even behind bars.

Now, he has snagged another accomplishment, having been featured in a mural in one of the hottest games releasing this year. An iconic photograph of Vybz Kartel aka Di Teacha has been made into a mural and is featured in the 2020 release of Cyberpunk 2077, one of the most anticipated video games for this year. It’s unclear if he has licensed his image and has received payments for it or whether the game programmers are paying homage to their favorite artiste by using the image.

The Cyber Punk new series is action-packed and set in a dystopian future- the year 2077. It also features celebrity action figure, Keanu Reeves. In the mural of CyberPunk – the image is doctored to show the artist without a shirt with hollowed out eyes and blood streaming from them. Fans shared the excitement as the game trended on Twitter, with many marveling at the currency of the image and it cementing the legacy of Kartel.

The mural was taken from the now iconic image of Vybz Kartel, which features him standing against a wall with his arms crossed in an x in front of his chest. The plain background gives a sort of HD effect to the artiste’s numerous arms and forceps tattoos, but also the tattoos on his face and neck are complimented by his evenly bleached skin tone and carefully styled mini braids. The photo was shot by Ports Bishop for a New York Times feature, which also ironically focused on Kartel’s growing worldwide influence and the U.S government denying him a visa. 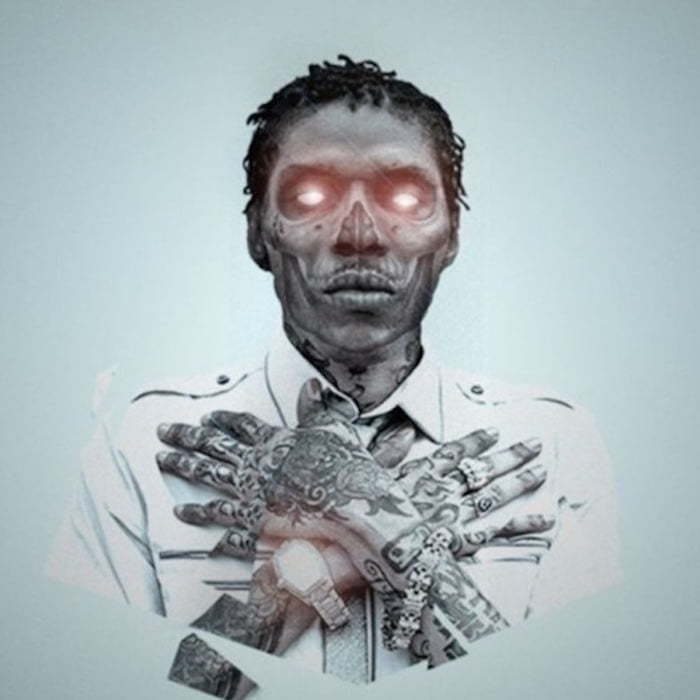 Kartel has been a highly influential style and fashion figure, but even his unsavory decisions like skin bleaching spread like wildfire after the artiste started bleaching but also making music that praised the act of skin bleaching and causing millions of people worldwide to become aware of the trend, with many publicly supporting Kartel and following in his footsteps.

In the Times article, the writer also noted Kartel’s global influence and asked how he maintained his presence without leaving the island, something that the artiste has managed to continue in spite of being in prison and serving a life sentence for murder. This year, he received his Gold Plaque from the RIAA for Fever which was released in 2016.

The game is now wildly popular, especially with the release of the new PS5 gaming system. This isn’t Kartel’s first rodeo though as his song We never Fear them was featured on Grand Theft Auto V, Pon De Floor DJ Hero 2 and Picture dis in Saints Row 2.

Vybz Kartel himself doesn’t seem to be a huge fan of video games as he has often used it to insult his rivals “couldn’t believe grown man a kill up demself ova game ‘fore dem go build some wealth. F***n waste man dem.” He also joked that he didn’t know what a PS5 was, thinking it was a car!

Meanwhile, the current Cyberpunk 2077 game is available for Microsoft Windows, PlayStation 4, Stadia, and Xbox One. PS5 users and the new Xbox Series x|s have to wait until 2021.