A number of high profile Jamaican women have come out in support of Majah Hype’s ex Kirby Farrell as several intimate videos purportedly of the woman in various sex acts flood the internet, and many tear her apart. Many are accusing Kirby of lying about her abuse when instead she was the one cheating on Majah Hype.

Kirby said videos released of her are from her old phone, which Majah Hype has cloned. The comedian himself has not denied the accusations as he said he had access to her phone, and he proceeded to leak various conversations and pictures.

The woman is denying that she has cheated on Majah Hype. She also denies that the videos posted are of her. In a comment to one of her followers, she said, “the crazy part is I never cheated on him! The videos he’s putting out are from before him, some of them aren’t even me! The text messages are from when I packed up and left him for six whole months! (I guess in his mind we were still together) and ALL of the penis pics are from my girls group chat!”

Kirby went on to say that “I don’t need followers or fans to make a living! He has to lie to y’all! not me! Everyone is mad because I told the truth! He lied! Didn’t own up to his abuse! Leaked pornographic videos of me from past relationships to flip the narrative! I’m ok with that! I know the truth!!!” She ended her explanation by using the hashtags #mastermanipulator #imstillstanding #headheldhigh.” 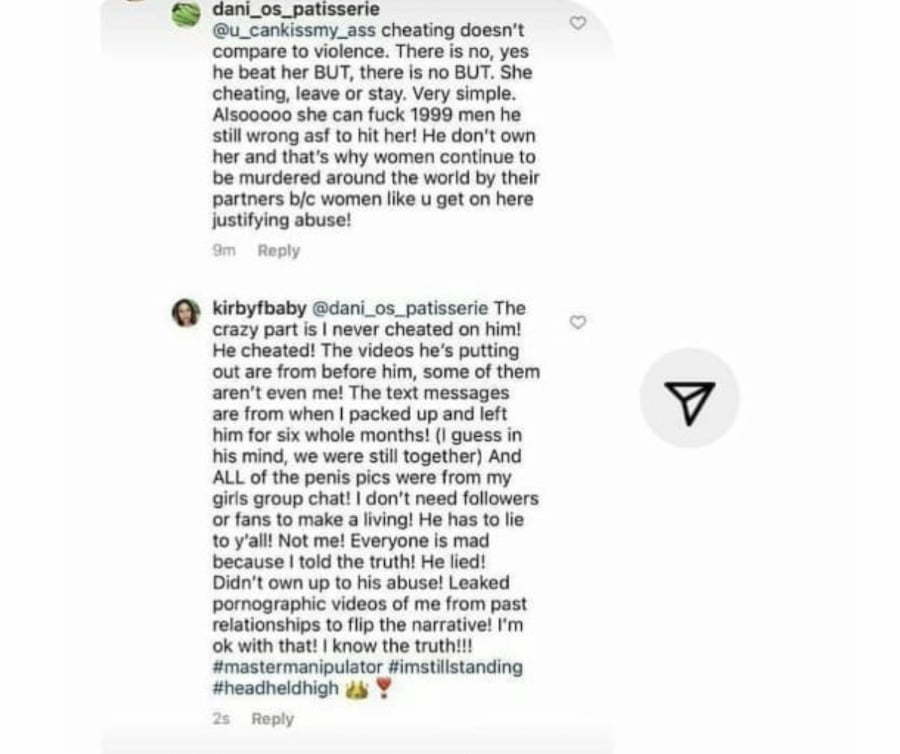 Kirby also took the time to address a claim by Majah Hype that she was in Los Angeles at his show when he introduced her as his wife. Majah Hype produced a text from Kirby’s phone that was sent to another man in which she said she couldn’t wait to get back to New York and see him. However, Kirby said, “yes I went to see him in L.A, in the picture he posted I wasn’t wearing my engagement ring because we were not an item! I was living separate from him! He was seeing other ppl and so was I! Hope that helps,” she said.

Meanwhile, many notable Jamaican women of recognized social standing have thrown their support behind Kirby. Among them are politician Krystal Tomlinson, who said, “I stand with you Queen without a second thought.”

Followers, though, were quick to trash the young politician for supporting Kirby. @javaanfrancis said, “I used to admire your strength and intellect once but now I can see that you are nothing more than a sophomaniac.” Another said “when Beenie Man stop beat out your nastiness then you can talk darling.”

It seems that others couldn’t wait to get things off their chest to Krystal – @msaubay said “if nuff was a person, everyday acting as if you are empowering and the first thing you do is look for a rich man to mind you.”

Dancehall artiste Cecile also shared her support saying “Don’t let any of the negative comments get you down. Putting hands on a woman is not ok. We don’t care about your private relationship details…what we care about is supporting the abused not the abuser. Decent people know the difference and why it matters.” 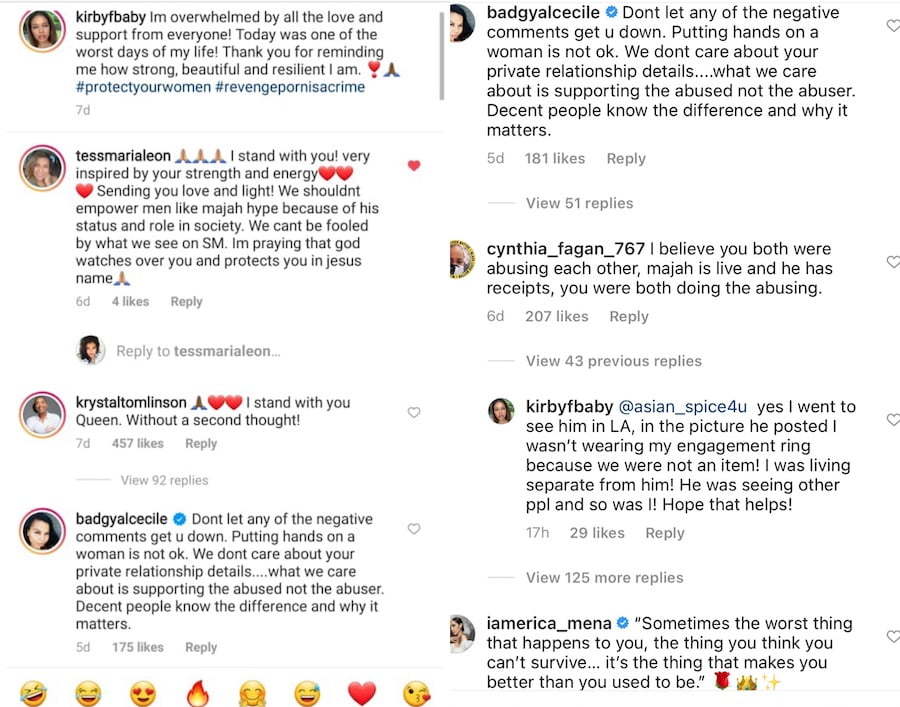 Jamaican social media influencer Markie Markland also sent words of encouragement “we are rooting for you! Use this as a lesson learned….we love u and stand with u,” he said.

Safaree’s wife Erica Mena also shared, “sometimes the worst thing that happens to you, the thing you think you can’t survive… it’s the thing that makes you better than you used to be.”

Pamputtae also sends prayers emoji and the heart emojis under the post.

Trinidadian legendary soca artist Denise Belfon has also shared support for Kirby saying, “continue to speak out baby, domestic violence is real….and it happens to the best of us, I love you baby…I stand by you 1000 continue to pray for the courage, the strength, the willpower to fight and never buckle..God Got You.”