Bounty Killer is responding to Spice calling him the G.O.A.T.

Spice is thanking Bounty Killer profusely on social media, lauding him as the “greatest of all time” amid his appearance on the newest episode of her talk show “Spice It Up.” Among the industry leaders, Bounty Killer remains the “Godfather” of the dancehall arena, and the veteran deejay is greatly admired in the community by both artists and fans.

When it comes to Bounty, it’s a universal respect, and we’ve seen various artists take the time out to pay homage on social media on different occasions. Spice is taking her turn with an anecdote that might enlighten many fans about how Bounty’s faith in her has inspired her for her whole career.

In a lengthy Instagram post, the Love and Hip-Hop star showered Bounty with gratitude and revealed that he was the first to give her a mic on stage. “Here’s the man who first handed me a Microphone when I ended up on his stage in a Lyric Clash at age 16 yup @grunggaadzilla you know my story not just my glory,” she wrote.

Alongside the photo of the two dancehall stars on the set of her show, Spice also told Bounty, “MI LOVE YUH BAD” and said the dancehall icon foretold her stardom and believed in her before she did herself. “You told me of my greatness before I even knew it and to this day it’s what inspired me to be so BOLD” the Love and Hip-Hop star wrote. “20 years ago you told me I’d be who I am today, do you have any idea how deep that is. Thank you, thank you, thank you.

“#Spiceitup interview is out now with the G.O.A.T,” Spice added. Bounty returned the love in the comments writing back, “I know I know I know Grace but thanks for always reminding me though and you’re most welcome my darling I’m so happy to be a part of ur illustrious story and u are always and forever grateful stay graceful,” the ever-poetic dancehall veteran said with a clapping emoji. Vybz Kartel also dropped some heart emojis in the comments, perhaps one for each of the respected artists in the photo. 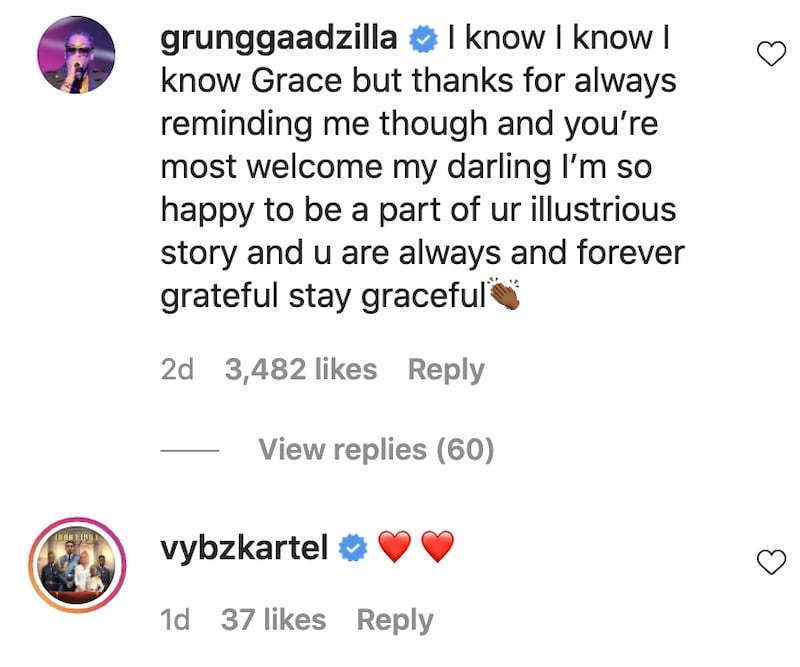 Earlier this year in March, Kartel took time out to toast Bounty Killer on Instagram as well saying, “Me love di General like a father/as a father and a mentor a teacher and a provider who offered me the ‘great escape’ from poverty and be able to take care of my family and make my kids live a more comfortable life than I had growing up.”

The Bounty Killer Foundation head is also known as the “Poor People Governor,” the “Warlord,” the “Godfather,” but while he wears many hats, what he cherishes most and what makes him “ubiquitous” as Kartel waxed eloquent in his previous Instagram post, is the universal respect that the dancehall icon commands.