Dancehall artiste Stylo G is giving fans a peek at his new look as he teases upcoming music.

Stylo G has a new hairstyle and he’s showing it off on the ‘gram. The London-based dancehall artiste took to Instagram to share a short clip of him singing along to one of his new tracks while putting various angles of his new hairdo on display. Stylo’s hair was noticeably texturized as he advertised his neatly woven rope twists with a single cornrow going down the middle.

While the Instagram video is an obvious attempt to not just promote Stylo’s hairdo but also his new songs which are heard playing in the background, some users online found that the most prevalent thing about the clip was the deejay’s obvious bulge as he appeared pantsless in the clip wearing only a black Moschino shirt and some very tight boxers.

“When u get a new Hair style More p***y ago Run,” Stylo captioned the post. “yuh like it? drop a [emoji].” Fans have likened Stylo G’s new hairstyle to that of Popcaan’s previous look. The Unruly deejay who caught a lot of attention himself when he got a buzz cut this summer was among the numbers in the comments. 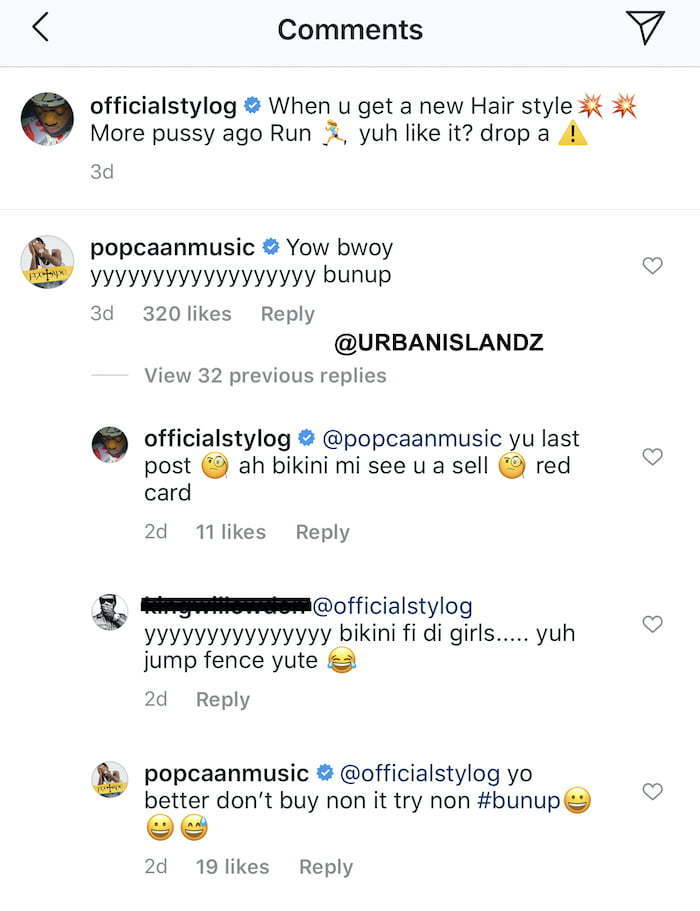 Whether Poppy is calling out Stylo G for the new hairdo or the lack of clothing in the video remains unclear. “Yow bwoy yyyyyyyyyyyyyyy bunup,” the Unruly Boss wrote in the comments. Stylo G was prompt in defending himself against Popcaan’s condemnation seemingly immediately understanding the unspoken offense being denounced. “Yu last post ah bikini mi see u a sell, red card,” he wrote in response. “Yo better don’t buy non [or] try non #bunup,” Popcaan ordered and reiterated.

Stylo G and Popcaan are, of course, great colleagues so their interaction in the comments was clearly but some friendly banter. In the video, that you can watch on his IG page, the “Touch Down” deejay mentions 2021 implying that it’s earmarked for some of the new music he was previewing. What do you think about Stylo G’s new look?