Chris Brown choose to pay attention to his kids rather than feed into his critics.

Celebrities deal with more criticism than us regular folk could ever imagine, and most of the time, they try to ignore it to maintain their sanity. However, every once in a while, a star has simply had enough trash talk from haters to let another moment pass without addressing it. Although it isn’t clear what prompted Chris Brown to lash out at his critics on social media last week, he was clearly fed up with something or someone when he decided to vent his frustrations publicly. After previewing new music last week, Breezy took to his Instagram stories to speak directly to people who apparently had some negative things to say.

“Shut up and just listen to the damn music,” he wrote. “Only people that give a f**k about others’ personal problems have a personal problem….. So please please take it personal if I stunt, sh*t, or flex on you! I’m not you and you could never be me. The lie was that we are the same….. No the f*ck we ain’t!” 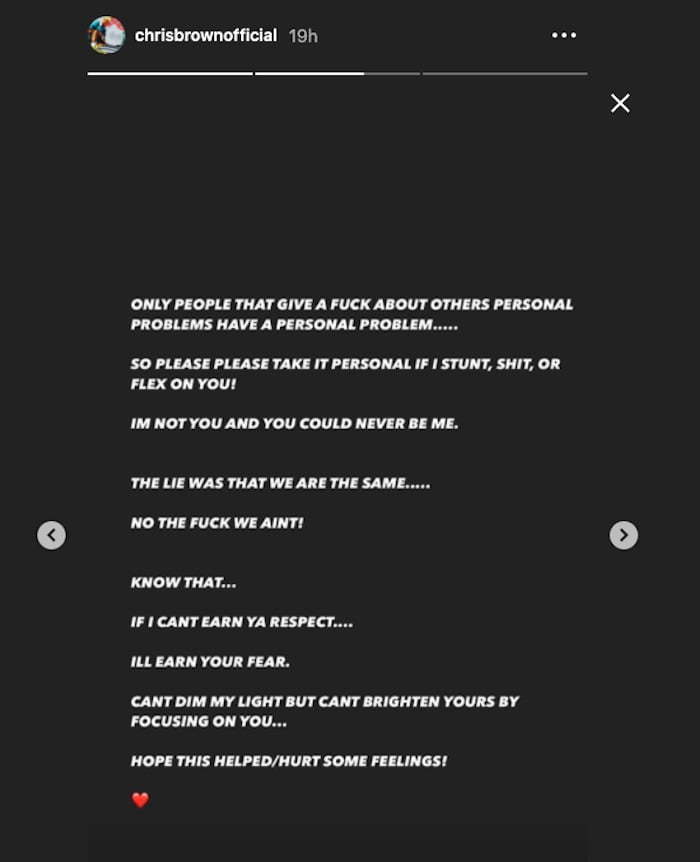 While Chris has plenty of trolls and former fans who condemn him for his actions in his personal life, this post sounds more like it was aimed at someone in the music industry. Although, others speculate he was making a broad statement aimed at all those who choose to focus on his past rather than his new accomplishments.

Brown went on to add a menacing threat to his post, writing, “Know that… If I can’t earn your respect…. I’ll earn your fear. Can’t dim my light but can’t brighten yours by focusing on you… Hoped this helped/hurt some feelings!” It seems Chris has since turned to the more positive aspects of his life to share with his many IG followers, posting a sweet photo of his two children playing together by the pool over the weekend.