Jazmine Sullivan is addressing critics of her massiv weight loss.

In August, Jazmine Sullivan sparked here to return to music with her first single in seven years titled “Lost One.” It was clear her vocals did not skip a beat in her near decade-long hiatus. However, after recently sharing a photo of herself on the set of the music video to compliment the single, many fans immediately noticed a change in her physical appearance.

While the likes of Missy Elliot, Lil Mama, Chloe x Halle and even Melanie Fiona welcomed her slimdown, others shared that they were not feeling the look, along with questioning her health. While a response from Jazmine was not expected, it seems the singer felt the need to address the criticisms that had been directed her way.

“Last week some people dragged me saying I look sickly,” came the opening remark on her Instagram Stories, before she dropped some information about her actual weight. “I’m honestly a size 12. 180 lbs. There’s nothing skinny abt me but my neck. I’m 5’8 however, so I sometimes photograph a little leaner than I am. But I ain’t skinny and that was never my goal,” said the 33-year-old singer. 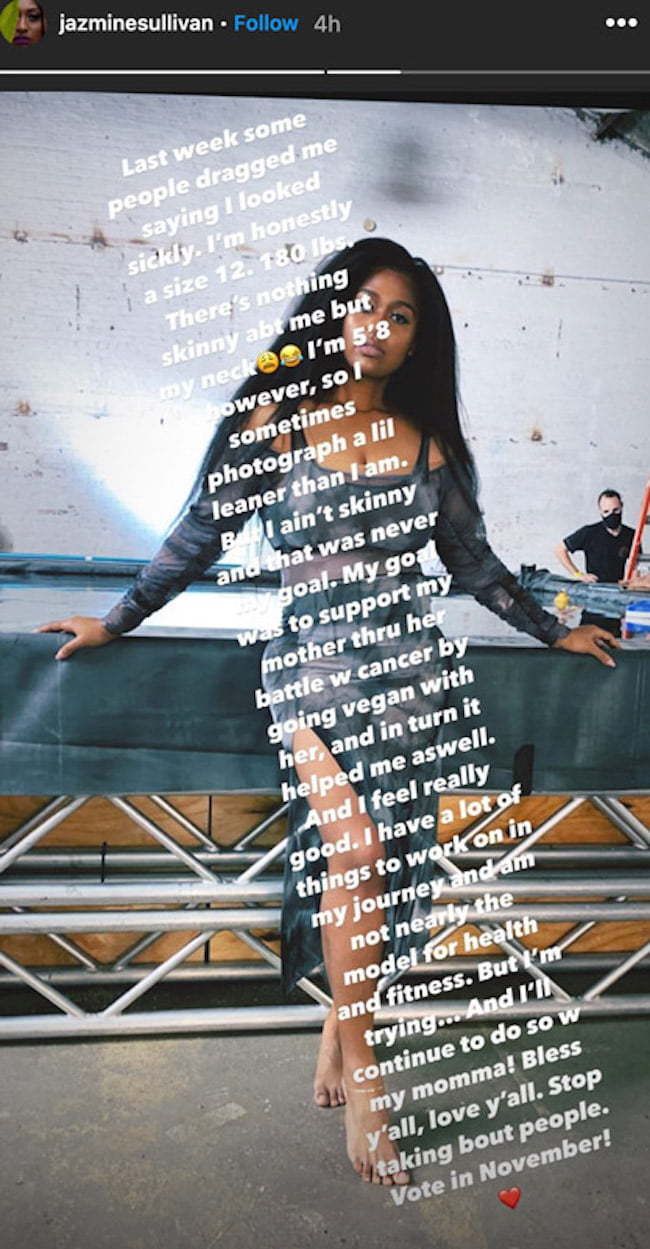 She further explained that her reduction in weight was not a result of her health concerns, but her mom’s, and she decided to join in to show her support. “My goal was to support my mother thru her battle w cancer by going vegan with her, and in turn it helped me as well. And I feel really good,” she wrote.

“I have a lot of things to work on in my journey and am not nearly the model for health and fitness. But I’m trying… And I’ll continue to do so w my momma!” Came the words from the singer.

Sullivan, who is best known for her song “Bust Your Windows,” saluted her fans before leaving her critics with a little bit of advice. She said, “Stop talking bout people. Vote in November!”

Many of the persons criticizing her new look were ultimately reminded of the late Chadwick Boseman, who sported a skinner look before his untimely passing as a result of colon cancer.

On set of LOST ONE video shoot. Coming soon??