Safaree Samuels and Erica Mena are hinting towards a possible breakup after they suddenly stops following each other on Instagram.

As we make our way towards the end of 2020, it seems nothing is sacred. Cardi B and Offset are getting a divorce, Will Smith and Jada Pinkett-Smith were caught in an entanglement, Yung Miami announcing she is single, and now there is a chance that Safaree and Erica Mena are headed for Splitsville. While neither party have confirmed the rumors nor have they filed court documents asking for a divorce, fans have noticed that the Love & Hip Hop couple are no longer following each other on Instagram, which is usually a pretty good sign that trouble is in paradise.

In the last few days, Erica has posted references to her kids being the number one priority in her life and also about her toxic trait being cutting ties with people who don’t appreciate her. It has led to suspicions that she may be sending subliminal messages to her husband, Safaree Samuels. 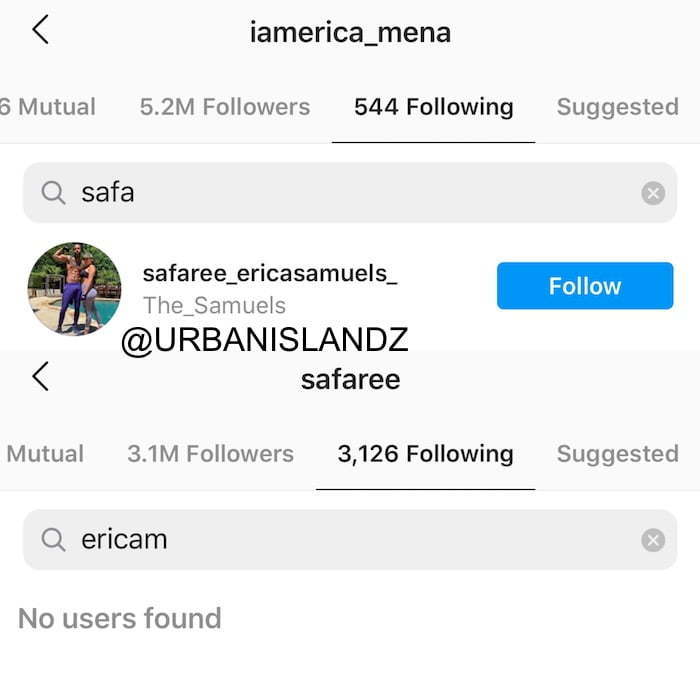 The IG unfollowing comes as the pair approach their first wedding anniversary on October 7th. The reality stars welcomed their daughter in February this year, with fans still trying to guess her name, which her celebrity parents have so far withheld. The latest hunch is “Maddie,” as that is what the “No Regular Girl” rapper seemed to be saying in the video he posted of him trying to feed her what appeared to be pumpkin purée.

Fans believe that if Safaree and Erica Mena have indeed broken up, it may have something to do with OnlyFans, which the couple recently joined. Erica said that she and the rapper decided to set up accounts on the risqué platform as it allowed them to be “over-the-top sexy.”

MY Kids?? This is what my life is about! Priorities be really fucked up for some people. Blessed I’m not one of those idiots ??

I’m really a solid b?tch , so it’s never my loss. Ever. EVER ? @prettylittlething

Sometimes I think that if I eat 1 bad meal I’d get a beer belly. I don’t know why I’m so traumatized but sometimes I’m scared to eat too. I’m a real nut job. Make sure that whatever you do in life you make yaself happy and mind the business that pays you. I’m tired of haircuts to.. I’m gonna grow dreads, I also like combing my beard. 1 thing has nothing to do with the other but I’m working and making sure what’s done needs to be done.