Lil Reese first-week album sales for his new project is certainly nothing to brag about.

The music industry is heavily reliant on statistics, and as they say, numbers don’t lie. In the case of Chicago rapper Lil Reese, he would most definitely wish that he had magical powers to change the numbers emerging out the first week of sales for his recent mixtape. Album sales directly correlate with public opinion of an artiste’s musical greatness. If your sales tank, then that can only mean that you don’t have too many fans that are lining up around the block to cop your latest release.

The “I Don’t Like” rapper Lil Reese has found himself in an unfortunate yet ironic position of selling just around 500 copies of his latest mixtape “Lamron 1.” Lil Reese was one of the hottest names emerging out of the Chitown area in the early 2010s. He went on to collaborate with the likes of Drake and Rick Ross, along with other members of his OTF crew, including Lil Durk and one of the biggest names in Chicago’s drill music, Chief Keef. However, the last couple of years have not been too kind to the father of one, with less frequent releases and lackluster sales to go with those releases. 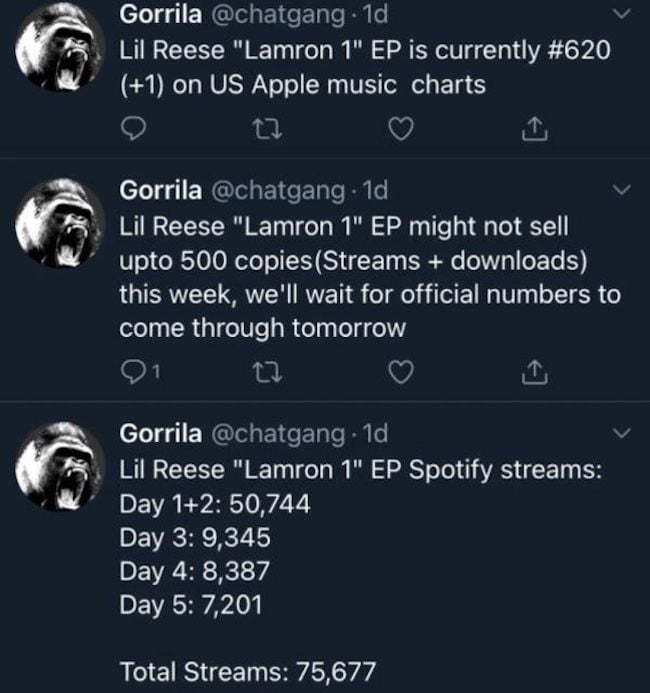 Nonetheless, the rapper, who calls himself the Grim Reaper, has been keeping himself busy. One of his self-appointed tasks included a constant back and forth with Tekashi 6ix9ine, after the “Trollz” rapper made a trip to a gritty area of Chicago, usually under the watchful eyes of OTF crew members. The visit was supposedly a promotional move by 6ix9ine to help move units for his album Tattle Tales. Sadly, 6ix9ine’s album sales turned out to be something similar to dumpster material, with only 33.6K US pure sales and 56K when streams are combined. Yet, those numbers can be seen as a major step up from those posted for Reese’s, who was clowning the rainbow-colored hair rapper.

Maybe Lil Reese and Tekashi 6ix9ine could blend their talents on a joint project, to give their fans a jolt and excitement. While this would definitely move a few additional units, we are almost sure it would never actually happen.