While a lot of females agree with Eliza Reign for taking Future to court to demand a sizeable child support, Summer Walker is not one of them. In fact, the R&B singer thinks it’s disgusting for Eliza to be asking for $53,000 per month to maintain her daughter fathered by the Atlanta rapper. Although $53,000 is likely nothing to the Atlanta artist who is reportedly worth $40 million, Summer Walker felt that the figure was exorbitant and said as much on her IG. “She wants 53 thousand a month. Women like this are so disgusting and sad,” she wrote about Seraphin in the since-deleted post. “I feel so bad for this man. Where do y’all even find these types of women?”

The removal didn’t happen quick enough for Summer as Future’s baby mama got word and then had a few of her own for the “Girls Need Love” singer. Seraphin condemned the 24-year-old for not supporting “Black women who are forced into situations like mine by Black men who are never held accountable,” and also questioned why Summer had anything to say at all as her own boyfriend, London On Da Track, is currently involved in a paternity case with a woman named Dayira Jones who claims that he fathered her 1-year-old son. 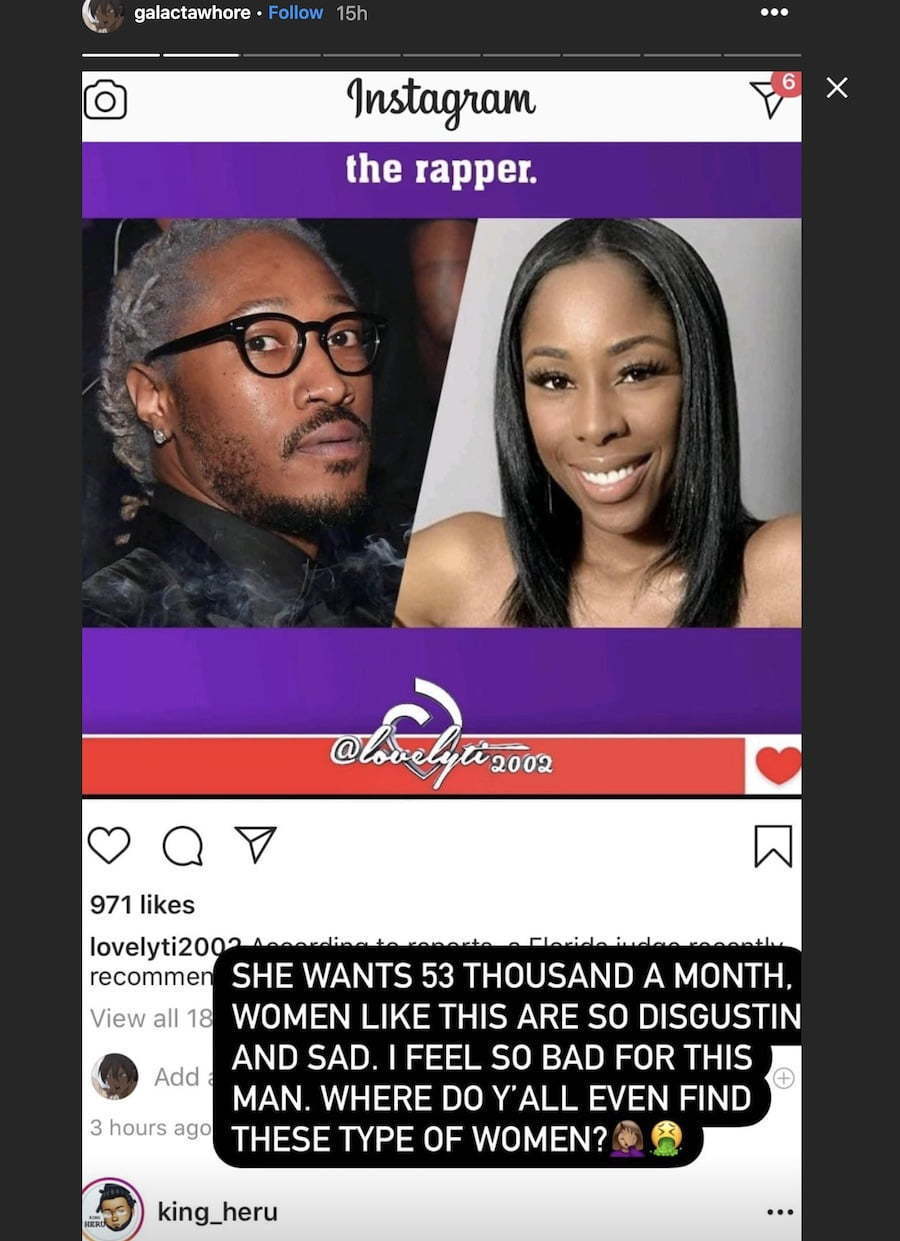 Eliza Reign has since responded to Summer Walker in a series of posts on her Instagram Story. “First of all, Miss galacta wh*re. Nice music, but where’s your brain at?” Eliza wrote. “I don’t even like going back and forth with black women during times like these, but how are you speaking on a situation like mine when your man is doing the same if not worse than the person I’m battling in court. Instead of condemning me on a fake number, you should be using your platform to speak against this type of neglect of children and abuse of women. But I can’t expect much from a person who condones their man “allegedly” playing the same type of games.”

It has been months that Future and Eliza Seraphin have been battling it out in court over child support for the daughter they share. The “Life Is Good” rapper initially claimed that he had no connection to 1-year-old Reign, something that a DNA test later refuted. Once paternity was established, Seraphin went guns blazing in trying to have her child’s father offer substantial financial support for their daughter, requesting $53,000 a month. Futch has refused to pay the amount, instead offering just $1,000 an health insurance, but the pair have now come to an agreement that will see the rapper give $3,200 towards his child each month.

#ElizaReign had a few more things to say after #SummerWalker spoke about her child support situation with #Future!! (SWIPE)