Are Skillibeng and Intence beefing?

Dancehall music is widely known for two things, its energetic riddim patterns, which rumble in the background of so many of the genre’s biggest releases, and the explicit and sometimes competitive lyricism of its key artistes. Ever so often, that competitiveness turns into fierce lyrical feuds, and it seems we may have a new one brewing between two of the island’s newest acts, Intence and Skillibeng. Both artistes got their big break just last year, but it seems they have also both aligned themselves with divisions/sides that had already existed, which may have fostered the start of this latest feud.

Intence and I Waata, pioneers of the Yeng Badness crew, were previously managed by Andrew ‘Boysie’ Campbell. With those managerial ties being recently severed, it seems both men have now formulated a strong relationship with Alkaline’s Vendetta camp. They had previously showcased the respect they have for the “Cree” deejay in interviews. However, a new song from I Waata titled, “Detta Play” has now solidified the relationship. On the other side of the fence is Skillibeng, who has been enjoying a tremendous blow up, copping various features from top acts such as Jada Kingdom, Vybz Kartel, and Popcaan along the way. With the Vendetta camp regularly squaring off against the GAZA, 6IXX, and the Unruly, it seemed only a matter of time before the newcomers went after each other. 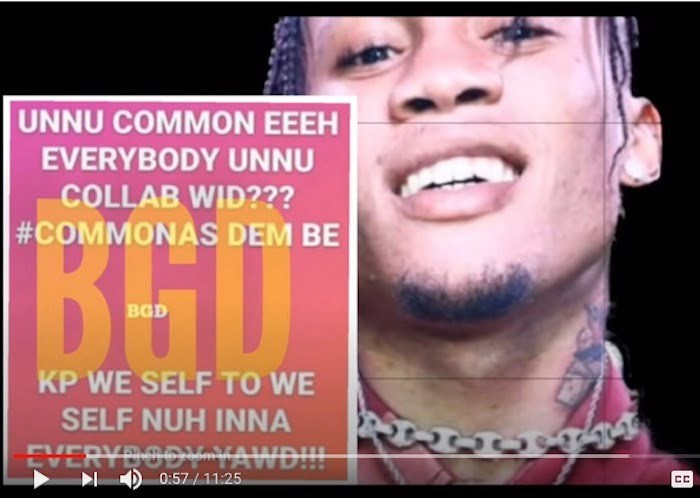 Intence, who also has a personal beef with Vybz Kartel, decided to lash out against an unspecified entertainer on his Instagram Story some weeks. He blasted said person for being somewhat of a “common” entertainer based on the numerous collaborations they have done. “Unnu common Eeeh. Everybody Unnu run go collab wid?? Commonas dem be,” came the observation from Intence, before dropping a line from one of his tracks, “Kp We self to we Self Nuh Inna everybody Yawd!!!!”

Skillibeng’s fans were not pleased with what they saw as obvious shade being thrown at their lyrical spitter. “Intence can chat to Skillibeng kmt no make me get mad inna dis,” came one spicy comment. Another speculated that Intence was not happy because he was not being approached for collaborations. Intence has been dominating the local Youtube Trending charts since 2020, scoring big with solo efforts such as “Antisocial,” “Yeng,” and “Dry Eye.” 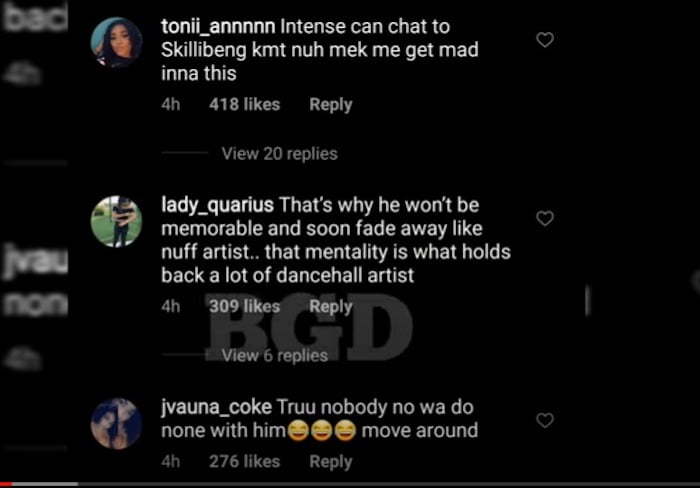 Supposedly based on Intence’s previous comments, the Eastsyde Records family of which Skilli is a part of decided to wage an all-out attack. The official Twitter account posted, “Don’t throw no shades, we will heng ur badness #eastsyde lyrics to ears…no annoying ways…image, style different….if u start it we end it.”

Another tweet from the production house referenced the matter of trending, something Popcaan also spoke about in one of his recent posts. “Unu run dung trending..wi will run u dung n ….tell them next time b4 them start chat f**kery,” came the warning.

Unu run dung trending..wi will run u dung n ?….tell them next time b4 them start chat fuckery

In reference to all the buzz about him in the media and from other artistes, the “Go Hard” deejay took to his IG Story to state, “If You Doh Hot Dem Nah Seh NTH.”

Dancehall fans who live for lyrical feuds may want to get their popcorns ready as this one seems set for a proper showing.