Azealia Banks left her fans shook and concerned after posting some messages alluding to suicidal thoughts.

Fans of Azealia Banks are hoping the rapper gets some help as it appears her mental health is getting the better of her. Social media followers became alarmed on Sunday as Azealia began expressing suicidal thoughts in the early hours of the morning. The “Black Madonna” rapper seemed to treat her IG fan base as her confidants as she shared how difficult she is finding life at the moment, considering the restrictions enforced due to COVID-19, and disclosed that she is having thoughts of putting a stop to it all in the most tragic way.

“This pandemic, extreme lack of social interaction, no intimacy, combined with constant public ridicule is making life harder than its worth,” she wrote in one of her several Instagram Stories. “I think I will end my tenure here on earth soon.” 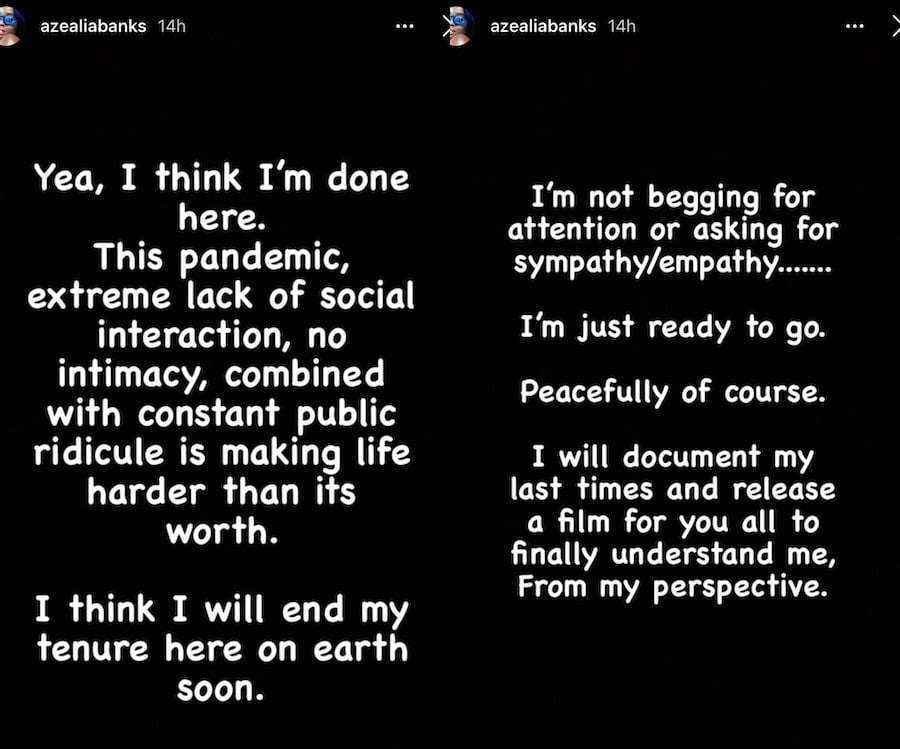 Over the years, Azealia Banks has had several run-ins with notable figures online, as well as having been booted from several flights for unruly behavior towards staff and passengers. She has also managed to get on the wrong side of a few international countries, leading to concerns about her mental health, but the latest remarks by the 29-year-old have left many worried. Despite the disturbing revelations, Azealia has told her fans that she isn’t keen for their sympathy. “I’m not begging for attention or asking for sympathy/empathy,” she said. “I’m just ready to go. Peacefully of course. I will document my last times and release a film for you all to finally understand me, From my perspective.”

Many fans expressed hope that Azealia Banks would seek the help she desperately needs, while others sought to remind the Harlem artist that she is loved and urged her not to do anything drastic. In an audio note which she posted, Azealia acknowledged, “I’ve been in trouble for a long time and asking for help for a long time.”

We hope she receives the support she needs before it’s too late.

this is sad, actually. i mean one of the most talented artist in our generation, azealia banks deserve better. pic.twitter.com/cK6MlkWl9p

Azealia isn't some white supremacist or fascist or some politician enacting violence on masses of people. She's a brilliant and deeply troubled woman with some bad opinions who's made mistakes. You're not better than her and neither am I. Have compassion without qualifiers.

TW/// SU1CI1D3
regardless of your opinions about azealia banks it’s clear that she’s not in the right state of mind to say stuff like this and all i can suggest is pray for her… as a follower of hers since 212 it’s shocking to read this it’s triggering me so much right now ? pic.twitter.com/kMGP57d7EJ

Anyone subliminally threatening suicide is a call for help, no matter what their public perception is. Pray for Azealia Banks ?? pic.twitter.com/SFylKrBOoP

Kanye gets thoughts and prayers and becomes a billionaire with all the bs he's said. People care about his mental health and will give him a pass. Azealia Banks has had similar breaks in her mental health and the blogs ignore her. She doesn't get any passes. Pray for her too! pic.twitter.com/TVPbDGnoIT

Difference between Azealia Banks and Kanye is Azealia’s mental illness came across as antagonistic, mean and toxic. Kanye, as a manipulative man child. I pray Azealia finds peace and the help she needs pic.twitter.com/4R7zhPNP13

If you’ve never struggled with depression/ mental health issues than please do not be a fucking dick to Azealia Banks. Wanting to end your life is a very VERY dark place and deep depression (trust me I would know..) so please send her positive vibes and have a fucking heart man.