Have you ever wondered what music Vybz Kartel listens to besides his own? The incarcerated deejay just admitted that Koffee’s “Lockdown” definitely makes his list. The newly released song talks about an outing post-quarantine where the possibilities are endless. While we have all been experiencing the “lockdown” life for a few months, Vybz Kartel has been behind bars for almost ten years.

The Gaza boss so-signed Koffee’s new hit song on social media and admitted that he is a fan of the Grammy Kid. Taking to Instagram stories this weekend, the deejay quoted some of the lyrics from the banger writing, “Mummy mi go NASCAR pull up inna fas’ car” before adding, “Koffee star! What a likkle gal bad!!! Lockdown a me song. Koffee I’m feeling you.” 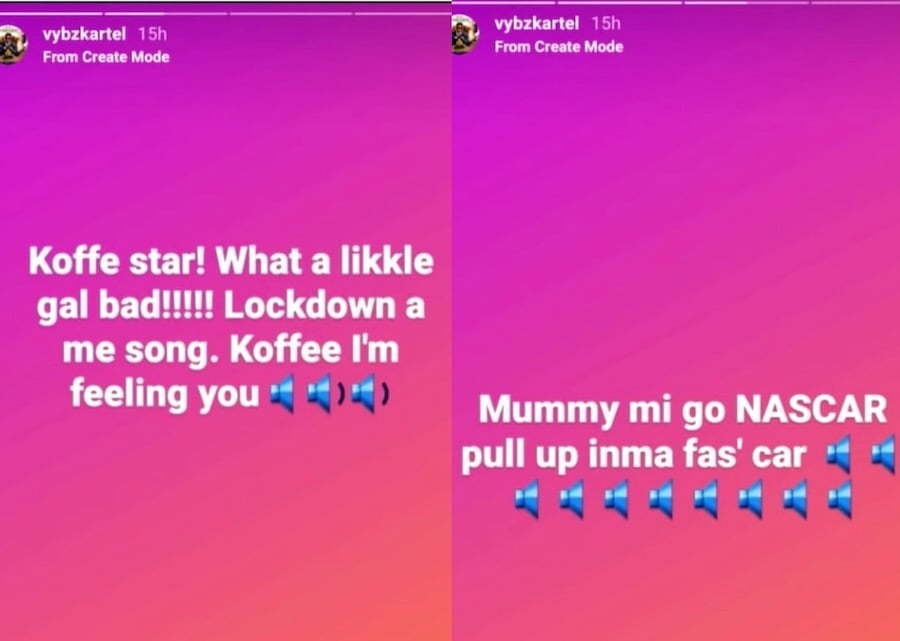 Vybz Kartel does not give his stamp of approval to many people, especially not publicly. Now with the dancehall mogul advocating for the biggest young sensation that Jamaica has seen in years, fans are eager to see what’s next. With Koffee on top of her new school reggae game and Vybz Kartel still winning in the dancehall arena, it’s the ultimate collaboration. A song by Koffee and Vybz Kartel is what many hearts desire, but timing is everything.

Whether the two will join together on a track soon or not remains a mystery. However, there is no denying that their track record is compatible. Both artists have set themselves apart from the competition with numerous hits and constant appearances on various Billboard charts. Vybz Kartel is currently gunning for a Grammy next year, an accolade that Koffee earned along with the bragging rights for the youngest and first female to win in the category she did. Meanwhile, Vybz Kartel had one of his songs certified Gold by the Recording Industry Association of America, which is something any artist, including Koffee, would aspire to do. It’s no wonder they inspire each other.

Do you think a collaboration between Vybz Kartel and Koffee would be the apex of 2020?