“Banana” success allows deejays Conkarah and Shaggy to become the first-ever Jamaicans to earn a number one spot on the Billboard Mexico Airplay Chart.

“Banana” was originally released 10 months ago and it currently has over 10 million views on YouTube. The hit-track was later remixed by DJ FLe following which it blew up massively on the social media app TikTok. With a dance challenge crazy generation to appeal to, “Banana” was subsequently ranked as the #1 Sound on TikTok. It was played during over 27 million original Tik Tok creation pieces showcasing just how catchy and hot the track is. For the #BANANADROP dance challenge on Tik Tok, popular user videos include that of Jason Derulo, Charli D’amelio, Nicole Scherzinger, Chiara Ferragni, and Neymar.

The original track along with its “DJ FLe – Minisiren Remix” have over 430 million combined global streams. Today, Conkarah and Shaggy dropped the official video for the remixed track, “Banana (feat. Shaggy) [DJ Fle – Minisiren Remix]” and it’s quickly being dubbed as the track for the summer. Blasting on airwaves worldwide, it ranks at #5 on Shazam’s “Top 200 Global” and #12 on Spotify’s “Global Viral 50”. The popular selection is a modern and high-spirited transformation of the traditional Jamaican folk song, “Day-O (The Banana Boat Song)”. The new video which was released by S-Curve Records/BMG was filmed earlier this month in Kingston, Jamaica by director Jay Will (Major Lazer, Third World). 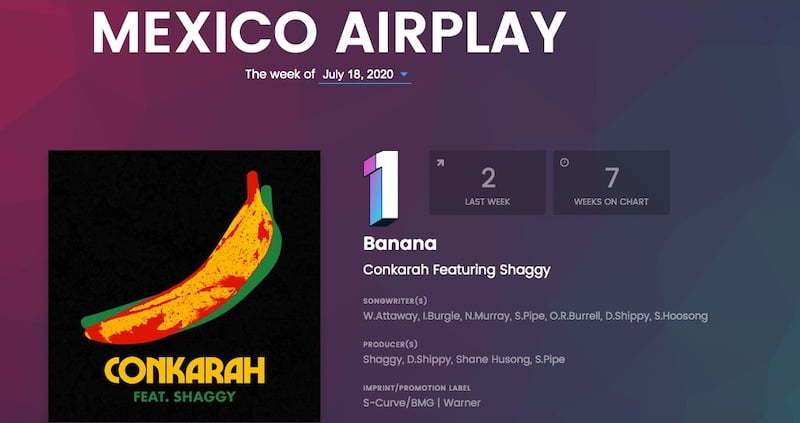 In the video, the popular Tik Tok dance is showcased by dancers young and old as well as market vendors and various peddlers in the streets. The artistes are seen singing their track while standing in front of a glorious fruit stand which of course has bananas in abundance. The entire video is sure to get you off your feet, moving, grooving and shaking along with Conkarah and Shaggy and their bevy of dancers. The video is now available for streaming on YouTube and all other major streaming platforms.

“Banana” is regarded as Conkarah’s breakthrough single and having the backing of Grammy-winning artiste Shaggy certainly didn’t hurt his optics. The track was also featured on Shaggy’s new album “Hot Shot 2020” which was released on July 10th. A true veteran and icon in reggae and dancehall, at 52 years old, Shaggy shows no signs of slowing down.

When speaking of their passion for music both artistes had this to say, “It brings joy to my soul when I can share impactful rhythmic sounds that can alleviate some chaos in the world right now. This is why I live for music. It changes and evolves us no matter how trying the circumstances are.” Shaggy went on to add, “I make songs to put smiles on people’s faces and to make people happy.”

Last month, “Banana” peaked at number one on Billboard’s Mexico Ingles Airplay chart, a tremendous feat as it is the first time in history that a Jamaican, let alone two Jamaicans, have ever held the top spot in Mexico. Congratulations to Shaggy and Conkarah!