Did Kim Kardashian cheated on Kanye West with Meek Mill?

Kanye West went on another Twitter rant session during the late hours of Wednesday, implying that Kim had cheated on him among other things. She has since addressed his claims. Although fans across the world have been praying for Kanye West following a Twitter rant on Monday, it seems that he has not received the help he receives as he once more took to Twitter this time with some very outlandish claims. Firstly Kanye alleged that his wife Kim Kardashian had cheated on him with rapper Meek Mill. He then alluded to Kim’s mother, Kris Jenner being a white supremacist stating that he has been attempting to separate from Kim for a year but was being confined by the family who was trying to have him committed.

In regards to Kim cheating on him, he divulged that the incident took place when Kim met with Meek at the Waldorf hotel where they discussed “prison reform”. He further added that he is in good standing with Meek however he puts all of the blame on Kim who he says was “out of line.” He also chastised her for releasing a statement without his approval, adding, “that’s not what a wife should do.” 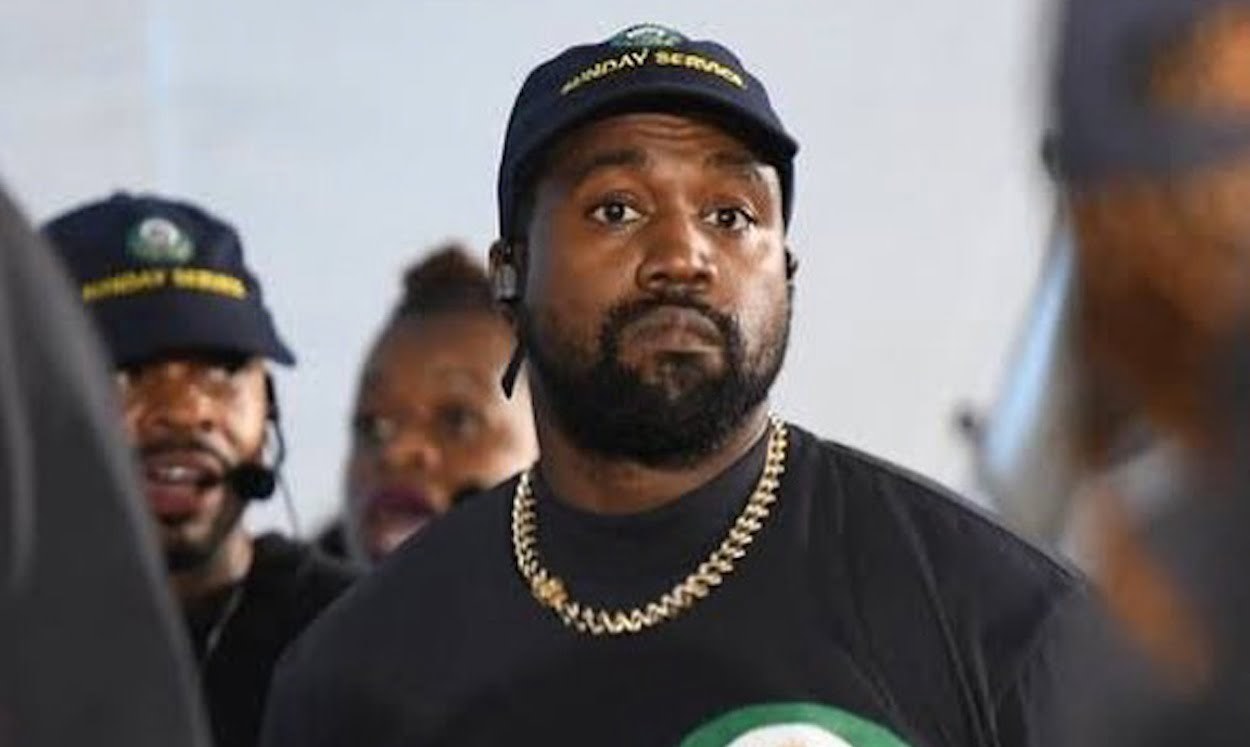 The latest claims by Kanye have seemingly really disturbed his wife, as she has taken to her Instagram account to address his statements. The entire family is extremely worried about Kanye’s well-being and are fighting to get him the help he needs. Kim shared intimate details about the struggles they are all facing as a family dealing with someone who is bipolar while asking the public to be compassionate towards Kanye as he lashes out publicly.

“As many of you know, Kanye has bi-polar disorder,” she began. “Anyone who has this or has a loved one in their life who does, knows how incredibly complicated and painful it is to understand. I’ve never spoken publicly about how this has affected us at home because I am very protective of our children and Kanye’s right to privacy when it comes to his health. But today, I feel like I should comment on it because of the stigma and misconception about mental health.”

Kim further highlighted that there is only so much the family can do in regards to getting him help, as they are unable to enforce control over someone who is an adult regardless of his mental issues. 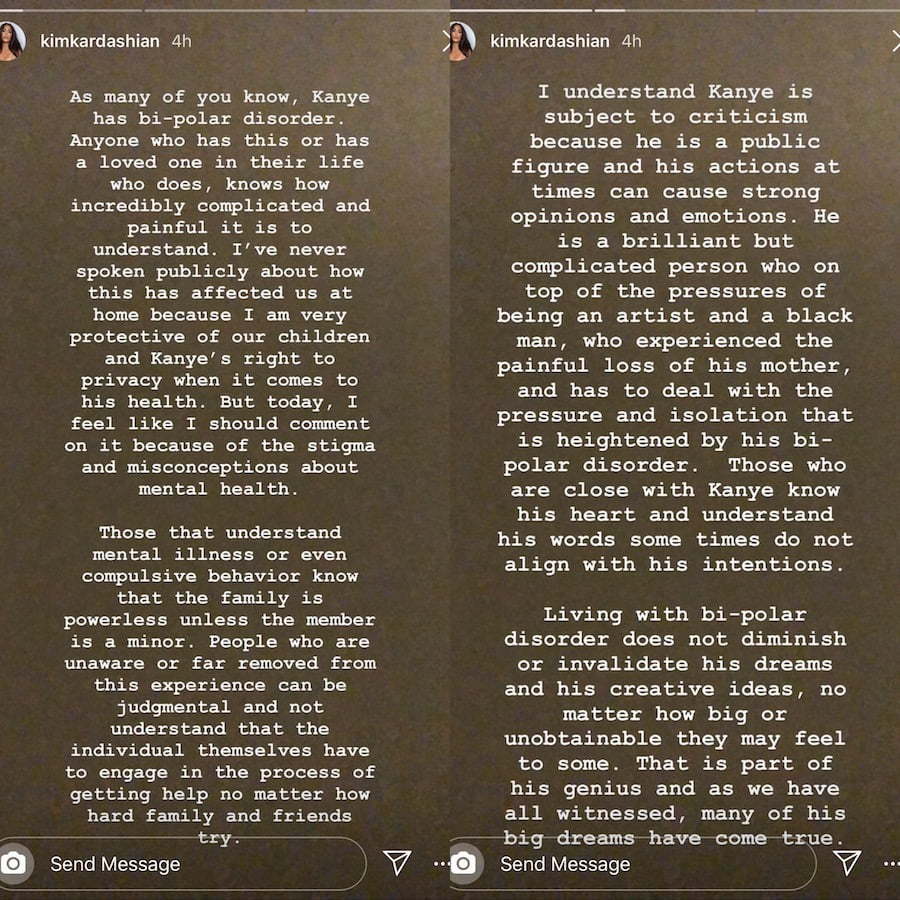 “Those that understand mental illness or even compulsive behavior know that the family is powerless unless the member is a minor. People who are unaware or far removed from this experience can be judgmental and not understand that the individual themselves have to engage in the process of getting help no matter how hard family and friends try,” she expressed.

Kim further elaborated that she understands that her husband is “subject to criticism” due to him being a prominent figure in the industry which leads to his actions causing a huge uproar within various communities. She added that Kanye is a “brilliant but complicated” individual who is plagued with the societal pressures of being a black man, and an artist as well as someone who is struggling with the loss of their mother, all of which “is heightened by his bi-polar disorder.” 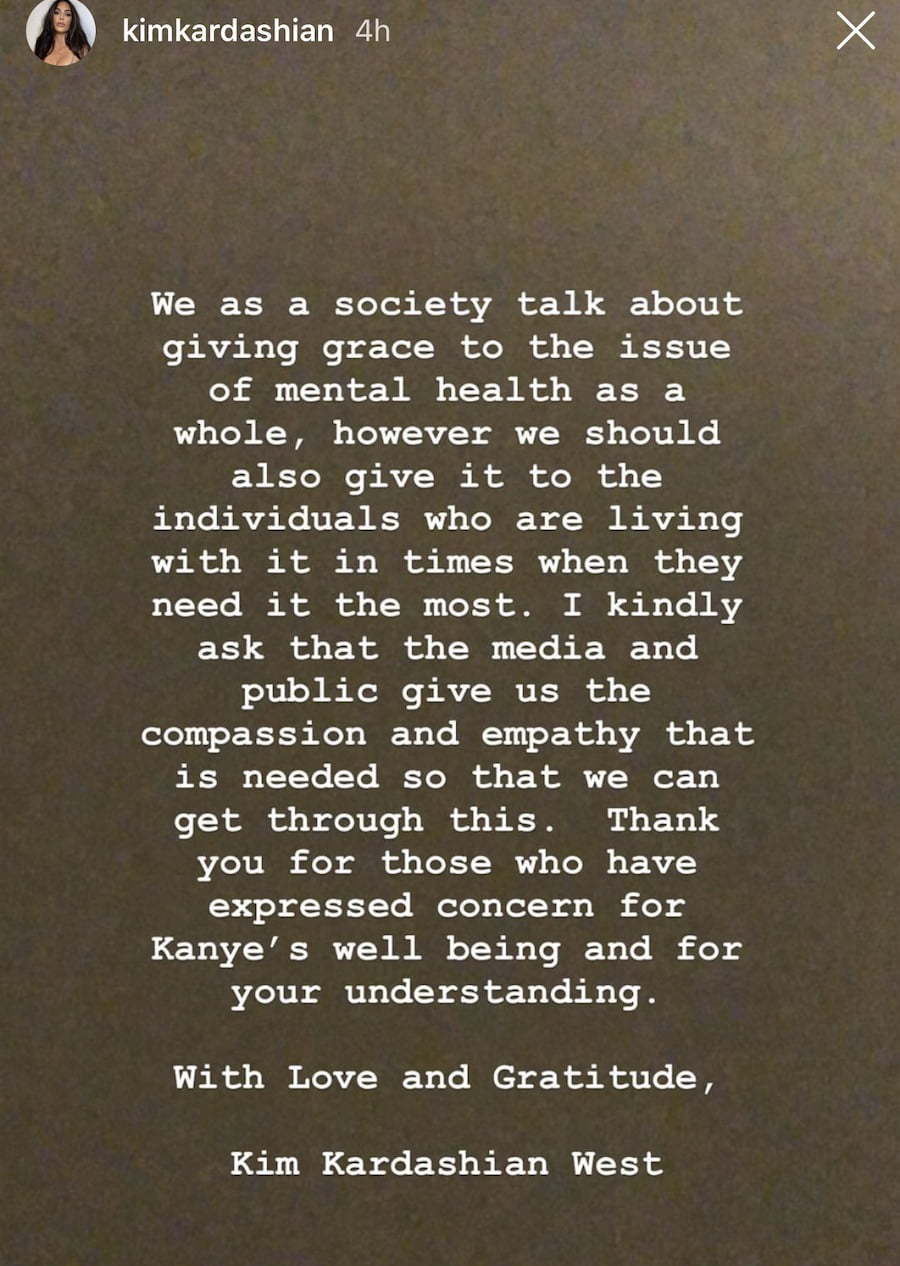 “Those who are close with Kanye know his heart and understand his words some times do not align with his actions,” she stated before continuing, “Living with bi-polar disorder does not diminish or invalidate his dreams and his creative ideas, no matter how big or unobtainable they may feel to some. That is part of his genius and as we have all witnessed, many of his dreams have come true.”

She then closed by imploring society to be compassionate to individuals living with mental health issues as much as they place importance on mental health as a whole. Adding, “I kindly ask that the media and public give us the compassion and empathy that is needed so that we can get through this. Thank you for those who have expressed concern for Kanye’s well being and for your understanding.”

Fans are now speaking out about their own personal struggles with mental health or with taking care of someone with mental health issues as they continue to pray for Kanye, Kim, and their four children. They have shared the same sentiments as Kim stating that until the individual wants to get help there is little to nothing that someone can do. They have added that bi-polar disorder is a sad and extremely destructive illness that is very difficult to manage.

Our thoughts are once again with the family as they attempt to navigate this increasingly unstable and difficult time in their life that is sadly unfolding in the public eye.