Vybz Kartel slams Lisa Hyper for apologizing on his behalf and is making one thing clear to his haters; he is not sorry.

Earlier this week, Lisa Hyper made headlines when she publicly apologized for dancehall legend, Vybz Kartel, on his behalf unbeknownst to him. Today, Kartel slammed Lisa for her overtly friendly apologetic tactics, making it extremely clear that he “neva beg friend.” On the latest episode of popular talk show, OnStage, with host Windford Williams, Lisa Hyper dished on her recent apology to Dancehall Queen Spice. The huge public apology was the hot topic of conversation on social media recently, so it makes sense the host would have wanted to get to the bottom of it. Lisa, however, decided to venture off onto the most unexpected path when she suddenly extended an apology on the Worl’ Boss’ behalf.

Yesterday the Teacha came through with a post and delete while making a reference to our published article reporting on the story. Taking to his Instagram account on Wednesday, July 15, Vybz Kartel posted a screenshot of the Urban Islandz article headline, “Lisa Hyper Reportedly Pregnant, Apologize On Vybz Kartel’s Behalf”. He then captioned the post, “ALL WHO LISA APOLOGISE TO ON MY BEHALF GO S**K UNUH MADA! @lisa_hyper hey no ramp bloodc***t ramp wid me eno.”

The post was deleted shortly after, but screenshots had already begun making their way around social media. The “Thickiana” deejay was chastised for his disrespectful tone towards Lisa while many chastened Lisa for offering an apology on his behalf, to begin with. One user wrote, “When u nuh respect urself n stand strong ina dat respect. Dog will disrespect u, rat will disrespect u, buck buck will disrespect u, ole horse will disrespect yuh ina dah one body deh,” while another added, “The way black men are continually and openly disrespecting their own women is really troubling. I’ll leave it at that.” 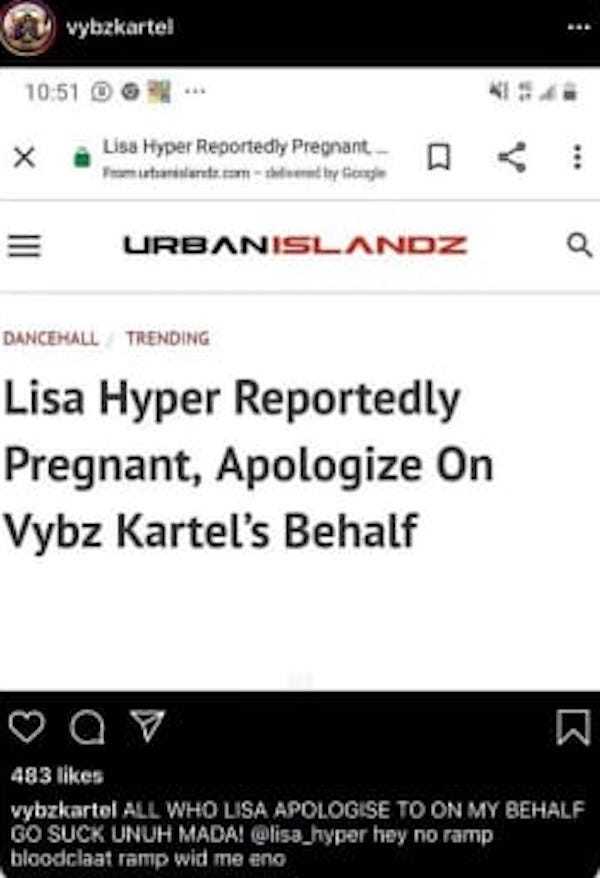 They continued writing, “Yuh a nuh him woman yuh a nuh him mother n he don’t rate u like that so why u a speak on his behalf?” and “STOP WALK AND SAY SORRY … yah ediat Lisa?? A Wah tf this.”

Vybz Kartel then made another Instagram post addressing the embarrassing situation. The Worl’Boss posted a clip of himself with Timbaland ft. OneRepublic’s “Apologize” playing in the background, he penned a harsh message. “me neva beg frien a maanin and now a evening. Too late fi apologise go s**k u big dunda pu**y mada if u no like me. Bigup me protege @lisa_hyper but wul on…. a when since u get friendly? Stop it Felicia.”

Lisa Hyper appeared undaunted as she littered the comment section with laughing faced emojis. Kartel responded to her, making light of her pregnancy rumors, “Who dat? Babymama,” to which she replied, “who dat god father?” That prompted Kartel to further poke fun at the numerous allegations that he, Dexta Daps and Chronic Law are all possible fathers of Lisa’s alleged unborn baby. “big up the baby father @($%*÷&” he posted with accompanying lips sealed emoji.

Elsewhere in the comment section, Lisa explained to a critic that she is not ashamed of the situation referring to the individual as “too emotional”. Fans have gone on to state that based on the posts, and they do not believe that Vybz Kartel himself is running the Instagram account as he is known to be more intelligent in his responses.

For now, this saga appears to be squashed, until next time.

me neva beg frien a maanin and now a evening. Too late fi apologise go suck u big dunda pussy mada if u no like me. Bigup me protege @lisa_hyper but wul on…. a when since u get friendly? Stop it Felicia ??