Ammika Harris is letting the world know that Chris Brown has her heart.

Chris Brown may be in a long-distance relationship, but he and his boo are still keeping the love alive. Throughout Ammika Harris’s pregnancy, she and Chris Brown kept fans guessing as to the nature of their relationship (and the fact that she was carrying the pair’s child at all). Once they welcomed their son in November, Breezy became far more affectionate on social media, sharing sexy photos of his baby mama, taken both during and after her pregnancy, and seemingly making it known that he and the model are indeed a thing.

When Ammika celebrated her birthday in May, the “Go Crazy” singer wrote an Instagram post for his lady, saying that the only one who looks at her as adoringly as he does is their son, and stating that he loves her.

Breezy revealed that the COVID-19 pandemic has unfortunately kept him and his family apart for the last few months. Although a resident of Los Angeles, Ammika, and the couple’s baby, Aeko Catori, have been stuck in Germany for the last while, as she was working there when the US enforced its severe travel restrictions. The situation has forced the lovebirds to do long-distance relationship resulting in Chris Brown missing the first few months of his baby boy’s life. 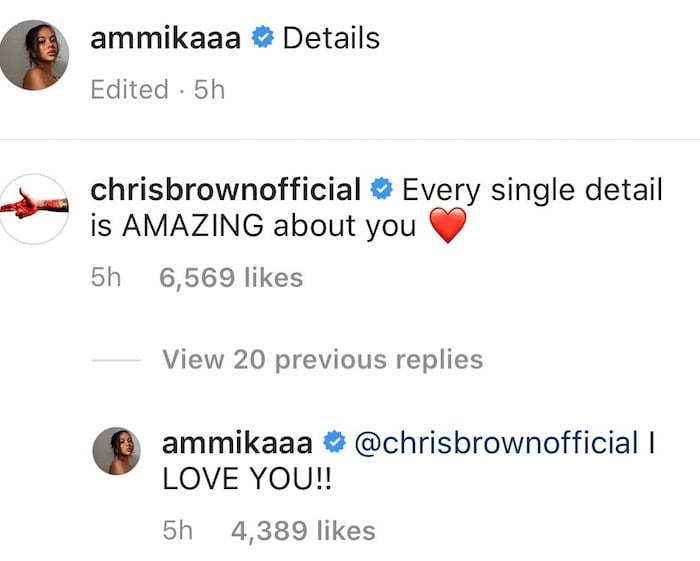 As such, the Grammy Award winner has made profound use of Instagram, often commenting on his girlfriend’s posts. Ammika’s latest photo on IG involved her pensively looking into the distance as she showed off the tattoo on her chest. The caption stated, “Details. Taurus+Pisces+ Scorpio,” and Breezy commented, “Every single detail is AMAZING about you.” Ammika Harris’ response was “I LOVE YOU” in all caps.

He is the coolest