Gucci Mane issued on apology to his label for calling them racist.

On Thursday night Gucci Mane shocked his fans with a tweet highlighting his decision to leave Atlantic Records next month while also pulling punches, calling them “crackers and polite racists.” This was soon deleted but not before the message was seen by the rapper’s fan base and picked up by media houses. Gucci Mane went further in a successive tweet, asking artists in the same position to make a stand against racist organizations. In his opinion, this should take the form of a strike with arson involved. “Leaving #AtlanticRecords July 3rd these crackers polite racist #SolcySummer,” Gucci Mane announced in a since-deleted tweet.

Taking to Twitter to air his grievances, Gucci urged other artists to go on strike against “racist a** labels” and suggested that they “burn them down too.” Gucci also used #BlackLivesMatter and #BlackExecMatter hashtags to further promote his point. Contracts have made several artists in this black-dominated genre slaves to white-owned organizations. Gucci’s accusations about executives at Atlantic Records being racist is not too far fetched considering the fact that record labels have a history of being called out for unjust treatment. 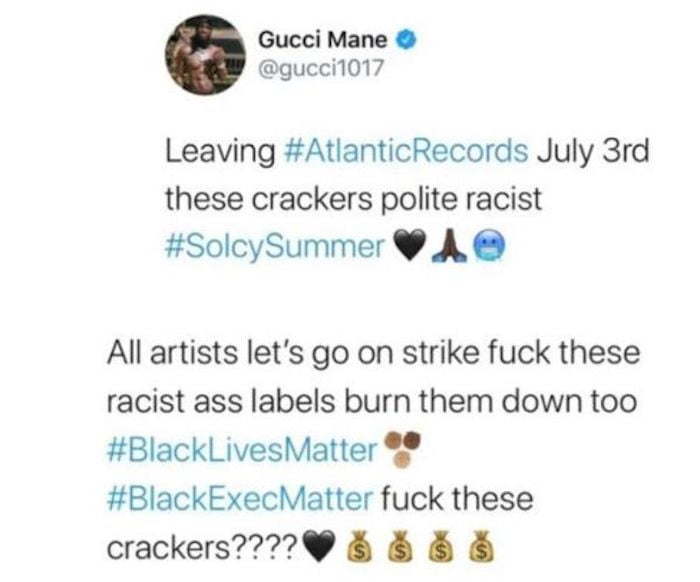 In a new Tweet sent out on Wednesday morning (July 1), Gucci Mane made it clear that he’s nit leaving the label and apologize for his language. “I’m not going independent but so respect those who go that route I apologize for my rude harsh language lately I’m a do better #1017/Atlantic,” he tweeted.

I’m not going independent but so respect those who go that route I apologize for my rude harsh language lately I’m a do better #1017/Atlantic ?

These corporations have earned a reputation of milking artists for millions while passing on but a small amount of the profits to them. The juxtaposition puts into perspective that it’s all too similar to slaves working on a plantation getting a hut, garments, and food while the plantation owner sits in his big house and pulls in millions of dollars off black labor. Artists have historically been given jewelry, houses, cars and the trade-off is to make 18 Cents off 1 dollar they were pivotal in making. Many white-owned labels on a whole might take advantage of underprivileged talents every day but Gucci Mane seems like he has had enough.

The Atlanta based rapper has had a fruitful relationship with Atlantic Records starting in 2007 and has released a whole eleven studio albums with them. His latest deal netted $10 million from the record company when he resigned in 2017 but is the trap legend worth more? Further in his rant, Gucci Mane aimed his shots at fashion house Gucci and named the brand the king of the hill when it comes on to polite racism. He has a history with the brand who he teamed up with this year in the wake of his album Woptober 2. This did not stop him from blasting the company and wishing death upon them at the hands of the novel coronavirus. “To all snitches and my haters and the most polite racist ever @gucci I pray y’all die of corona virus,” Gucci added in his rant.

What exactly drove Gucci Mane to those tweets? Will we begin to see other artists sharing similar sentiments? Only time will tell.