Tekashi 6ix9ine went berserk on YK Osiris and other rappers who don’t yet get a number one song.

Ultimate troll Tekashi 6ix9ine did promise us a seven-day rant after he “beat the industry” landing at the top of the Billboard #1 without radio play, Spotify or Apple Music playlists. Nicki Minaj also assured us that Tekashi 6ix9ine would be wilding all week with his new #1 status, and he’s delivering on that as the days go by. The pair teamed up for their second collaboration, “Trollz,” which has earned them both a Billboard number one song and a whole lot of backlash to boot.

While the generous queen has promised to get some things off her chest later this week, the undefeated troll has gotten right down to business, coming for everyone who doubted, canceled, blackballed, or called him out leading up to the premiere and success of the collaboration. On the chopping block in today’s IG Live with DJ Akademiks were Meek Mill, Future, Trippie Redd, and many others, including “Worth It” crooner, YK Osiris.

Tekashi took the time to name and shame several rappers who he claims called him out but has never had a number 1 record. “Hey guys! So you guys ever notice how when people diss me or they say my name or try to clown me, the moment I respond, like the moment I address them, I’m dragging ‘em? I get it. Well today I’m number one in the world and I just wanna address a couple things, I wanna drag em some more. I got a list! Let’s start at the top: Future you’ve been rapping for over a decade, if not over a decade, close to a decade, you have many Drake features my friend, and you never went number one. Mr. Meek Mills, since 2011, close to a decade, you never went number one either. He also mentions Lil Dirk, G Herbo and Trippie Red before bringing home his point- Every New York rapper that’s a male, that’s not old, you’ve never been number one…” he said.

6ix9ine has been poking fun since May’s friendly boxing match between Osiris and Lil TJay, but today shots were fired, and the trolling was in full effect. Arguing with YK Osiris – who had time today and was actually tuned in and asking to be added to the Live – he and DJ Akademiks took jabs at his performance style and lyrics, laughing at “how R&B this ni**a tries to be.” 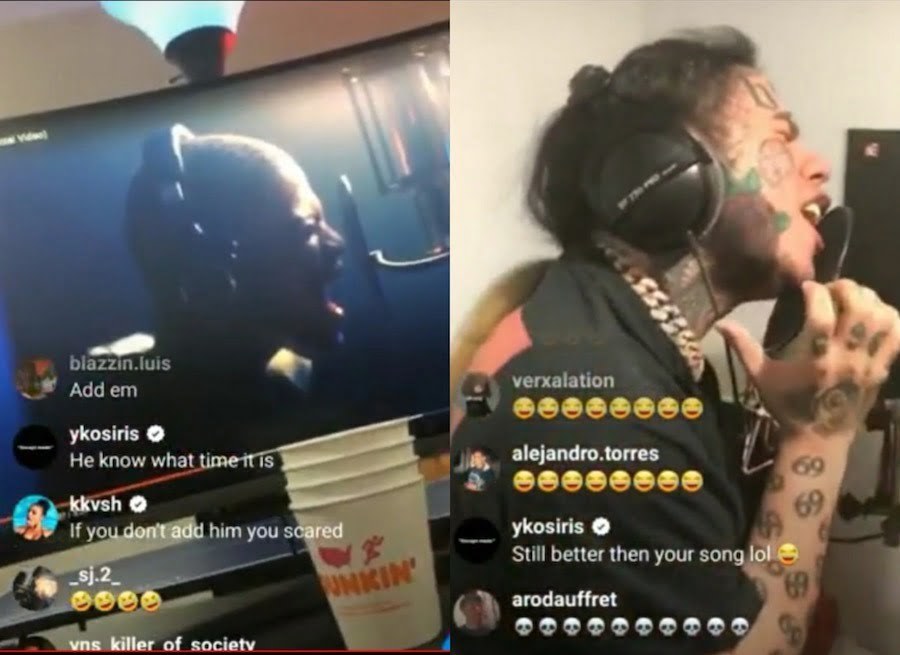 “Listen Osiris, we all know you not on my level – 1. I don’t wanna give you that amount of clout…Look the only reason I don’t do it to you right now is coz you believe in God and I like you coz of that.” He runs into his home studio in the next room to mock Osiris’s movements on the microphone in the “Worth It” video, “like if he doesn’t get the song right, she’ll walk out of his life.”

When Osiris again comments, “Let’s speak facts,” and Akademiks seems interested in the idea, 6ix9ine says, “I gave him clout, I gave him streams, people are gonna go listen to this right now and watch his face.” Social media sensation KKVSH even notes that Tekashi was probably scared to add Osiris, sticking to his usual format to finish him off. After a good long laugh?—and minute?—Tekashi finally adds, “I’m done for today can we call it quits? Nobody has number one but me..” and attempts to end the Live with that final word, admitting “that was a fail” when he realizes he didn’t press the button.

#tekashi69 calls out all the rappers who have dissed him but still doesn’t have a number one.

YK Osiris wasted no time putting the Gooba rapper in his place with a couple of strong points of his own, including that Tekashi’s music is trash and is only selling because music is not what it used to be. “Can you get nominated for a Grammy? You gotta stop, my brotha. If you so number one, why you ain’t nominated for a BET Award? If you gon’ talk about being number one, talk about you being happy my ni**a like, like ni**a you still a clown bruh like that don’t make you like 100%. I don’t care bout no Instagram, y’all mind so delusional. I’m never trash, never that and I don’t gotta explain myself coz all y’all do is ride waves..” he said in his own rant. As the first in what is shaping up to be a series of clap backs, we’ll keep you posted on the hits, misses, and disses as this plays out.

Over to you for now, though—is Tekashi’s trolling played out, or should Osiris have let him have his moment?