DJ Akademiks has gotten himself involved in Meek Mill and Tekashi 6ix9ine’s beef.

Like many others, Meek Mill has not been a fan of the “TROLLZ” rapper since his racketeering case. Tekashi 6ix9ine won himself no fans when he agreed to a deal with the prosecutor and chose to testify against his fellow members of the Nine Trey Gangsta Bloods. The decision earned him two years behind bars instead of 47 but also lost him many friends and mentors in the industry. Amongst that list is 50 Cent, Snoop Dogg, and Meek. The “Otherside of America” rapper laid into Tekashi hard after the latter was transferred to house arrest, calling him a rat and an informant behind a keyboard who is trying to troll families that he ruined.

While 6ix9ine was still serving time in prison, Meek decided to unfollow DJ Akademiks on social media as Ak is a good friend of the rainbow-haired rapper and promoted one of his songs. More than a year later, the Everyday Struggle host is standing up for his convicted friend by calling out Meek and his alleged hypocrisy. Ak pointed out that Meek is represented by Roc Nation management, which was started by fellow rapper, Jay-Z. The current CEO of the company is a woman named Desiree Perez, who was a former informant for the Drug Enforcement Association.

“I guess 6ix9ine’s point is if you don’t like rats, you wouldn’t be working for a rat. You wouldn’t be thanking a rap for getting you out of jail,” Akademiks said alongside an article that detailed how Perez was arrested for possession of cocaine in 1994 and agreed to go undercover for the authorities and helped to break up major drug deals in Colombia and Puerto Rico. 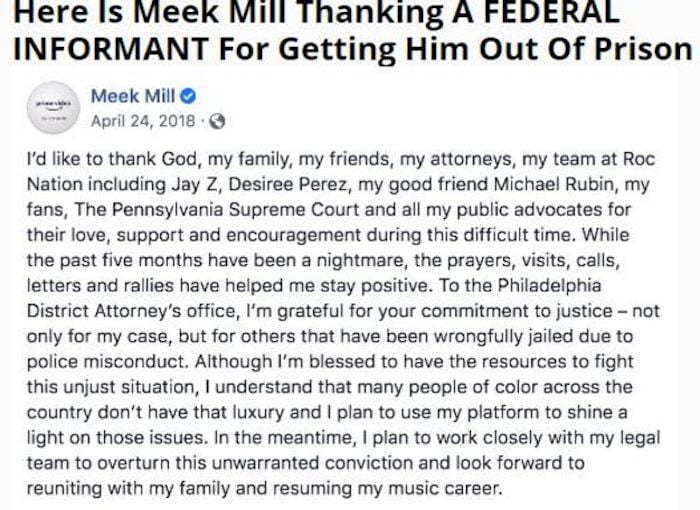 6ix9ine and DJ Akademiks may need to work on their boxing skills, but at least Tekashi knows he always has Ak in his corner.