Was Rihanna too embarrassed to admit that she was dating Travis Scott a half a decade ago?

Travis Scott and Rihanna were rumored to be dating years ago while they were working on her mega-hit album ANTI together. Around that time, the two were spotted hanging together on numerous occasions in different cities. Riri and Scott met a couple of years sooner in 2014 and later worked together on her multiplatinum single “B*tch Better Have My Money” in 2015, but they never confirmed a romantic relationship at any point. That was until an article published by Complex that same year pretty much exposed the two as a thing.

The writer Lawrence Schlossman explained that he waited to interview Travis for several hours only to hear that he wouldn’t be available. According to Schlossman, it was because the rapper was “holed up with Rihanna,” his rumored boo thing. “What exactly they’re doing upstairs (smoking, f**king, working, playing charades) I have no idea, but it’s more important than any interview,” Schlossman wrote. He also described the moment Travis shied away from questions about the green-eyed goddess saying, “don’t do [me] like that, man” to avoid labeling their relationship. 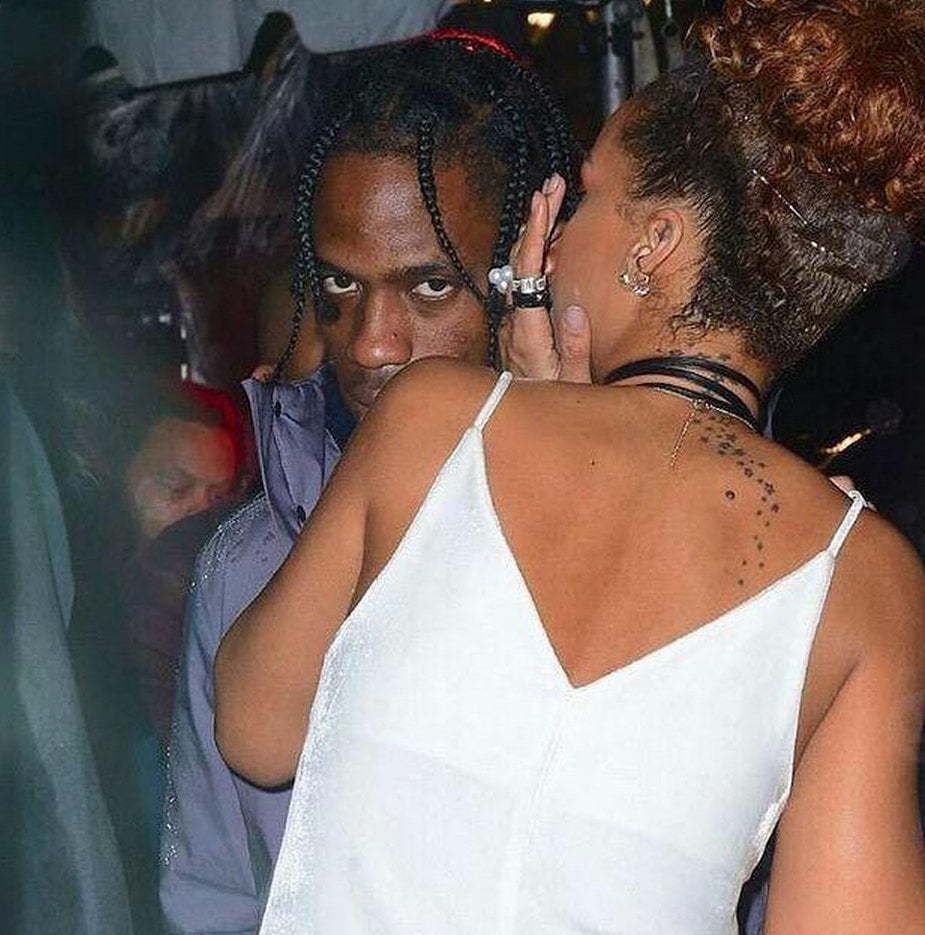 Travis Scott described Rihanna as a creative and inspiring muse. The biggest telltale was when the young hip-hop producer at the time, beamed as he kissed his fingers and planted it on his computer screen on a campaign picture of Rihanna. Now several years later, the journalist who interviewed Scott is revealing in a podcast why the two remained coy about their relationship back in the day.

According to Schlossman, Rihanna would have been too embarrassed to confirm a relationship with the budding star though he was only four years her junior. On a recent episode of his podcast Throwing FIts, Schlossman said, “It’s not because he’s like, ‘Don’t tell anyone I’m smashing Rihanna’, “It’s because Rihanna’s like, ‘Don’t tell anyone that I’m smashing Travis Scott, please.’ [It’s] obviously embarrassing as f**k.”

Rihanna is notorious for keeping her romantic relationships private, and who could blame her after her highly-publicized history with another famous singer. Most of Rihanna’s “rumored” flings have remained that – a rumor, as the star, is careful not to confirm anything about her love life. That being said, maybe Travis was not necessarily singled out as someone she would never admit to being with. I mean c’mon, she never said that she and Drake were a thing either but how important was her validation there?

Travis would go on to become one of the most successful rappers and producers in hip-hop and eventually cop his own billionaire lady who proudly flaunted him as her boyfriend and later her baby daddy. He is likely extremely pleased with the way his life turned out even without the Bajan superstar and would have a hard time identifying anyone who would find it “obviously embarrassing as f**k” to be with him these days.