It’s a pretty easy call that Saturday’s Verzuz Clash between Bounty Killer and Beenie Man has gone down in the (digital) history books. Swizz Beatz and Timbaland, organizers of the online series, are already in doubt that they’ll be able to top it. The Prime Minister was tuned in. Police arrived physically to shut down a virtual event. What might have been more controversial, impossible or ended badly because of their very real rivalry some years ago is now the talk of the town. Epic proportions would be a gross understatement.

But as Unruly young blood Popcaan (who was also watching along with Rihanna, Missy Elliott, Alexis Skyy, Steflon, Ashanti, and countess other celebrities) often said, “?trouble deh deh.” ?No good deed goes unpunished, and it seems that in order to deliver great work, one must brace for the backlash. While the heavy hitters were laying down their swords to put the best of the culture on display, Majah Hype and Tony Matterhorn were not as pleased with the direction chosen by the dancehall duo.

Voicing their disapproval of the international platform, each insisted that the artistes time and talent would be better spent on a more local or regional scale, supporting similar Caribbean or Jamaican efforts. Word got back to Swizz Beatz, and a back-and-forth began that almost clouded the crowning of Dancehall Culture as the night’s real winner.

What could’ve caused all of this? It seems there’s a shared frustration from both Majah Hype and Tony Matterhorn that their own projects and good intentions haven’t always been met with open arms or such widespread success. Majah has since apologized, seeking out Swizz Beatz via Instagram Live to clear the air and put down any rumors of glaring disrespect. Tony Matterhorn insists he won’t be apologizing, but shared an update to his Instagram page, indicating that, “its all respects.” Whether or not that’s “badmind” as many comments sections would suggest, what all of this does speak to is the magnitude and magic of Jamaican music. 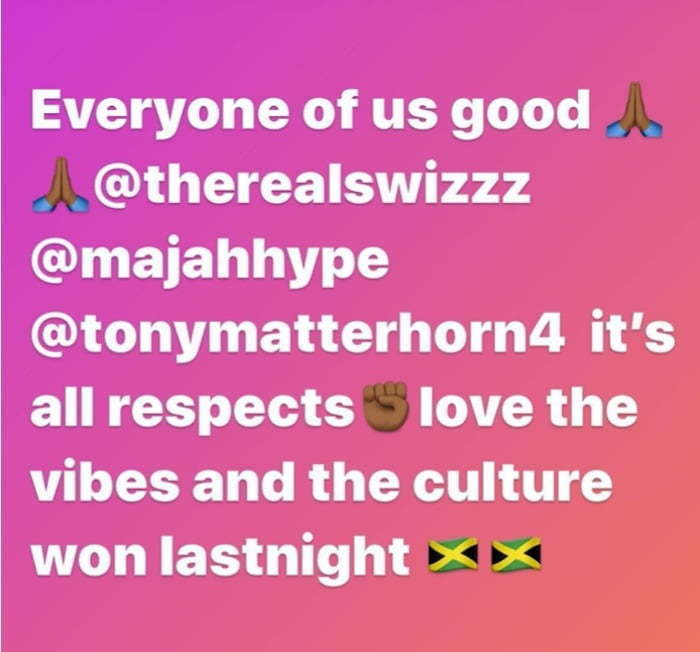 Dancehall has now been featured before gospel, soca, afrobeats, and the many other Verzuz clashes fans are crying for, such as Chris Brown and Usher, as well as Monica and Brandy. It’s deeply infectious music that’s near and dear to audiences the world over, evidenced by the ‘over 500,000 tuned into the culture all at once’. If the genre was the winner, then maybe both Matterhorn and Majah decided to take a page out of the book of the two prophet’s who killed their war of words after some major feuds in their prime.

For much of the 90’s, the sometimes violent implications of their contention was at the forefront of dancehall — people took sides, picked fights and were literally divided for years. The truce between Beenie Man and Bounty Killer lasted long enough to give us the greatness we witnessed on Saturday – some killer memes, Bounty dancing alongside Beenie’s daughter, the two embracing in the same space – when many were just glad for a reason to smile and the playful show of positive energy.

Like Swizz Beatz hinted in his Verzuz Recap, ‘its called Verzuz, but it’s actually a celebration’ and a testament to what can be achieved when you bury the negativity and move forward in service of the music. An unbothered Swizz Beatz went over the night’s events again with Timbaland, clearly over the scathing commentary and ready for fresh success. “Ludacris said Jamaica had the best vibes for Verzuz. Coming up off Beenie and Bounty Killer, they made it super hard..” Timbaland agreed, interjecting, “We know that. When you see that you know you gotta be on point. After Jamaica? We gotta have Digicel, we gotta call them immediately!”