Rihanna is celebrating 15 years in the industry!

Rihanna has been in the game for a decade and a half, and in honor of that, the singer’s fans gifted her a trending hashtag on Twitter. The singer took to Instagram stories to pen a sweet note for her fans, commemorating the milestone.

“#15YearsOfRihanna Thank you for all the love on this hashtag today!” she wrote. “Man this is trippy. Feels like just yesterday I was shaking in the hallways of Def Jam waiting to audition for Jay. Pon de Replay is where it all began… 15 years later and I’m here because God led me to you, and you guys have held me up, supported me, tolerated me, loved me, kept it too real with me, and we gon always be connected because of that!”

As the singer pointed out, her career took off after her first single “Pon de Replay” took the airwaves by storm in 2005. The record was from her debut album Music of the Sun, which also included other hits like “If It’s Lovin’ That You Want.” When she was only 16 years old, Rihanna was scouted by hip-hop legend Jay-Z who signed the star to Def Jam while he was still president in 2005. Rihanna’s breakout album “Good Girl Gone Bad” is among her most successful bodies of work to date, earning Platinum status 6 times over. She’s also scored two No. 1 albums on the Billboard 200 with “Unapologetic” and “ANTI” in 2012 and 2016, respectively. 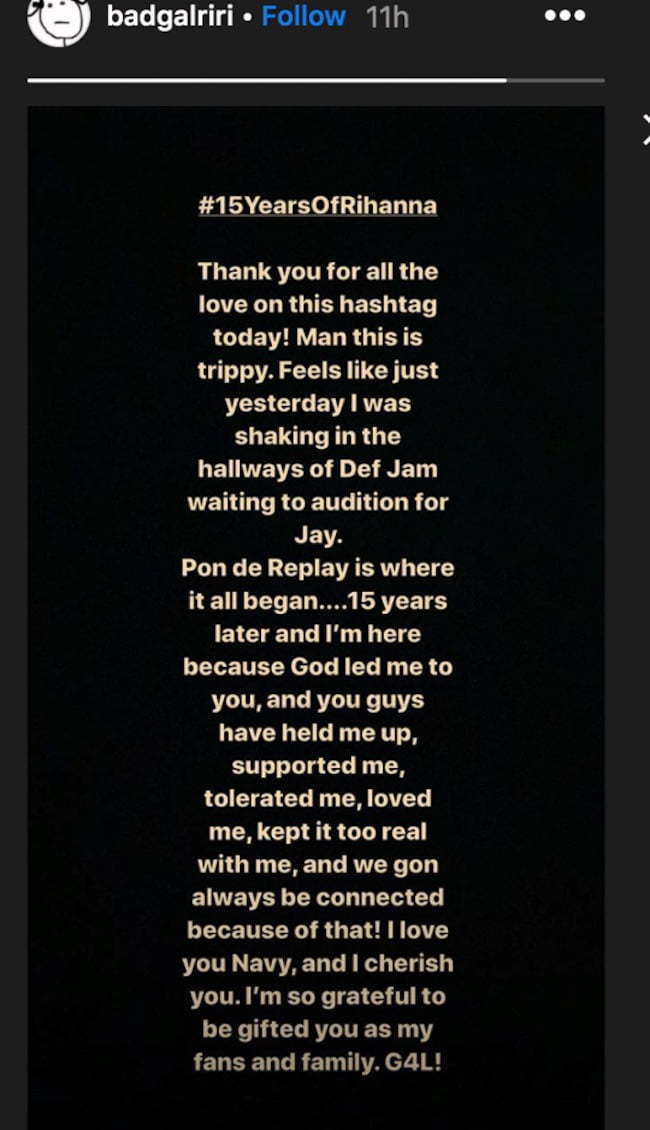 Throughout her illustrious career, Rihanna has ventured into fashion, cosmetics, fragrances, and has even published The Rihanna Book. Fans are still eager to hear new music from the singer, with some even frequently taunting her online with the dreaded question “Where is the album?” The Bajan singer has said her upcoming body of work which will mark her 9th studio album will be a reggae-infused album so we expect to hear some heavy dancehall bases and hopefully a little Jamaican patois.

Rihanna has inspired with hits like “Only Girl,” “Rude Boy,” “We Found Love,” “Stay,” “B*tch Better Have My Money,” “Diamonds” and so much more. She is not only one of the most famous celebrities across the globe but has also become the highest-paid female artist in the world as well.

Today the Rihanna Navy celebrates the Barbados native’s longstanding and exhilarating career and the singer made sure to express the importance of her bond with her fans. “I love you Navy, and I cherish you. I’m so grateful to be gifted you as my fans and family. G4L!” she ended her Instagram story.

Congrats on 15 years and cheers to the next 15 RiRi.