Why is Teejay getting hate mail after showcasing his new Mercedes-Benz SUV.

Montego Bay’s own Timoy Jones, better known as Teejay the Uptop Boss, has made great strides in music since getting his major break a couple of years ago. While the singjay’s talents were well known and documented by Western Jamaica, it was the managerial expertise of Kingston based Romeich Entertainment that truly helped to propel his career to the heights it currently occupies.

As many before him have done, the artiste seemingly copped a new Mercedes Benz SUV to celebrate his success. In sharing the news with his over 600k Instagram fans, the “Uptop Boss” posted two pictures that were allegedly shot in the Montego Bay community he calls home. The images capture Teejay standing atop the hood of the brand new ride while sporting a face mask. In one of the images, a handful of males, seemingly of varying ages, can be seen scattered around the vehicle.

The caption below the images read, “Uptop nuh worship vanity Uh hear.” The post’s aim seemed to be rooted in positivity and spiritual guidance, as highlighted by its bashing of materialistic outlooks on life. Sadly, not all of Teejay’s followers were in agreement with the post.

One person commented on the obvious health concerns for the men captured in one of the images. Apart from Teejay, no other person is wearing a protective facemask or exercising social distancing. This has led to questions of where his true concerns lie. “So you ah di only one weh ah go live lol cuh di rest ah dem soon dead. only one wit da mask,” commented one Instagram user.

The criticism was met with a fierce reply, as another user refused to accept that Teejay should be blamed.
“How is that his problem? He prolly just drove to go link e man Dem. kmt y’all find some dumb sh*t to say in here u see man,” replied the fan.

With almost 600 comments recorded below the post, there were constant sparring of words in the comment section. One person took a shot at the entire entertainment collective that Teejay falls into by suggesting, “That all a unuh seh drive a tiida r a pro box then nuh.” 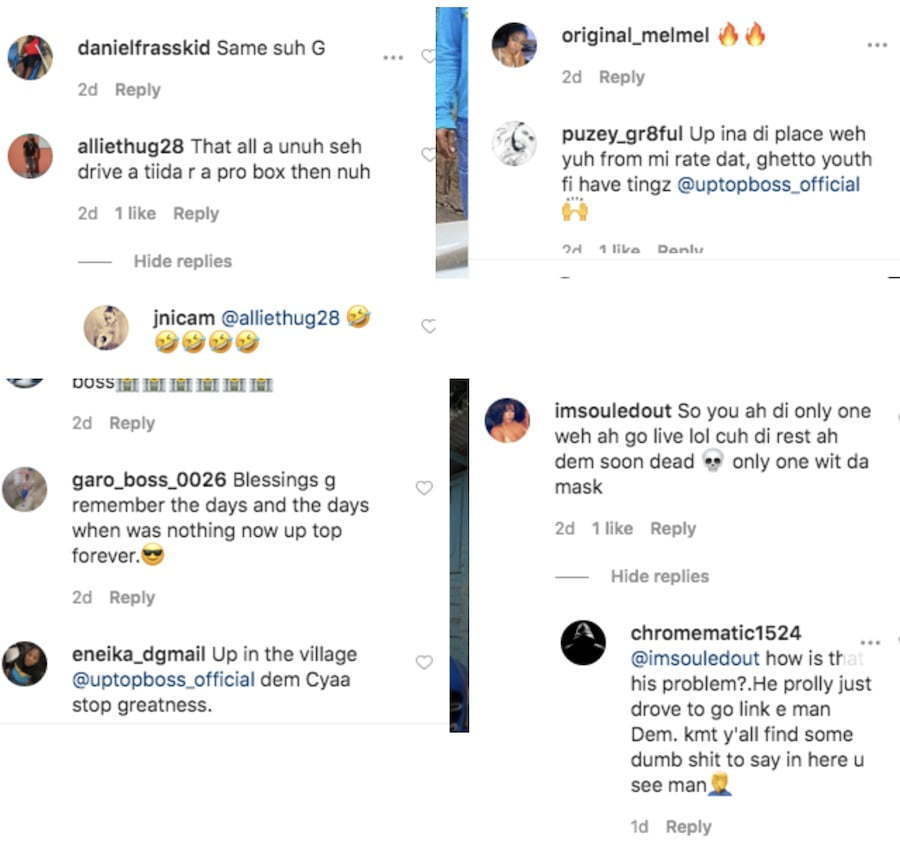 Nonetheless, the positively charged comments outweighed the others, with many showing just how happy they were to know that one more ghetto youth was able to make it out of the slumps.

“Blessings g remember the days and the days when was nothing now up top forever,” wrote one fan.