Tekashi 6ix9ine attempted to donate a whopping $200,000 to charity, but it was flatly rejected.

Tekashi 6ix9ine says he’s a rat, but he’s sharing his cheese with charity. The rapper has been splurging left and right on luxury vehicles and expensive jewelry, but he isn’t neglecting his social responsibilities. According to 6ix9ine, he is contributing some of his wealth to one of the largest food organizations in the United States during the pandemic. The rapper has pledged to donate $200K to the No Kid Hungry Foundation.

6ix9ine made a lengthy Instagram post where he described the gesture as something that God wants him to do that’s important for our kids of tomorrow. Alongside the photo announcement, he wrote, “During this pandemic, I understand we have nurses and frontline Hero’s who risk [their] life daily to save others. But NEVER forget the children & families who depend on OUR PUBLIC schools for daily meals and nutrition to keep our future leaders growing to their best potential,” the rapper said. 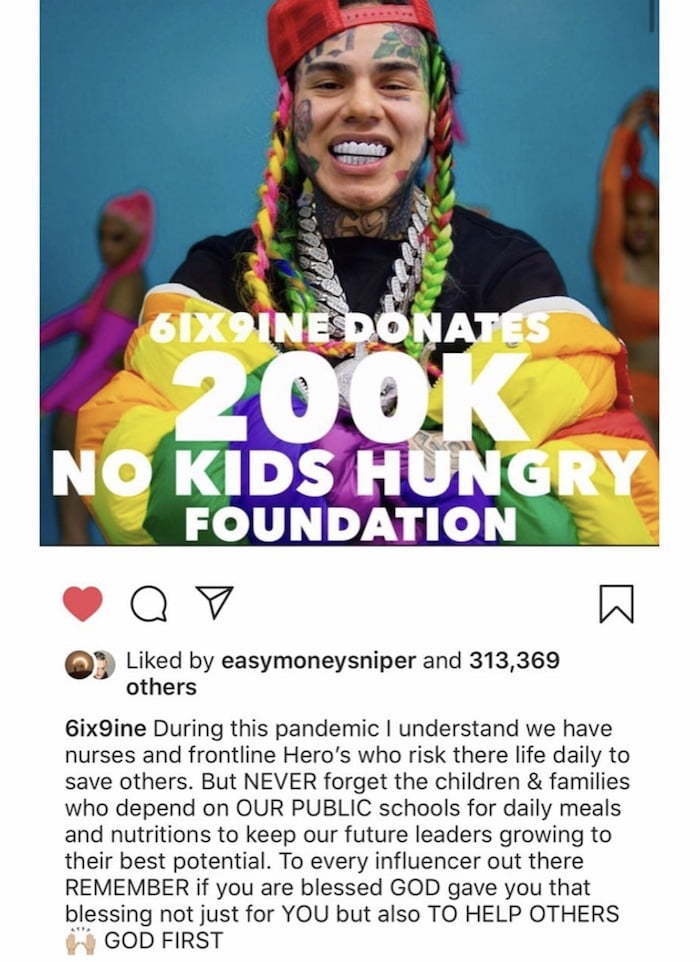 The post accumulated over a million likes in an hour, following suit with pretty much everything this walking anomaly does these days. But there is just one problem. No Kid Hungry Foundation flatly rejected the donation from 6ix9ine, citing their values not being aligned with his. The rainbow-haired rapper has since responded to the organization rejecting his donation.

“@nokidhungry rather take food out the mouth of these innocent children I never seen something so cruel,” he wrote in a comment that he later deleted. It’s unclear of snitching was part of the reason why the donation was rejected or if it’s his social media antics.

Tekashi 6ix9ine has been on top of his publicity game since his highly anticipated return. This latest move was further propagated by his comment on an Instagram post about his announcement.

The rainbow-haired rapper has really been selling this rat thing, and he is showing no intention of going back to the hole from which he so recently popped out. In the meantime, he is also keen on exploiting this opportunity for better causes. We gotta salute the self-proclaimed “King of New York” for that.

Tekashi 6ix9ine is also gloating over the YouTube views of his new single “Gooba,” which already clocks around 120 million in three days. He also namedrop Drake in his post.

DONT LET THEM CHEAT US OUT THE NUMBER 1 LOOK AT THE NUMBERS ! WE BEATING EVERYONE AND THEY MOTHER ON EVERYTHING ! They hate to see this shoutout to drake he’s the goat but this has to be seen