Update: Buju Banton and John Legend dropped a new song “Memories” and you can stream it below.

In this day and age, understanding the subs that are thrown out on social media has played an integral role in keeping us in the loop, so we don’t miss too much. Yesterday, for example, it was strongly implied that there is new music coming this week from veteran reggae artist Buju Banton and the ‘legendary’ John Legend. Though he hasn’t revealed the tracklist or the features for his upcoming studio album yet, Buju has been dropping hints on social media, and we may have just gotten the biggest one yet.

The Grammy-winning reggae singer sent out a tweet hinting at a feature dropping this Friday (May 8) off of the impending Upside Down 2020 album. “New [fire] from #UpsideDown THIS Friday feat. my good friend,” Buju wrote with the watchful eyes emoji. Fans were taken by surprise when famous singer and songwriter John Legend responded to the post, seemingly suggesting that his iconic vocals would be blessing the track. 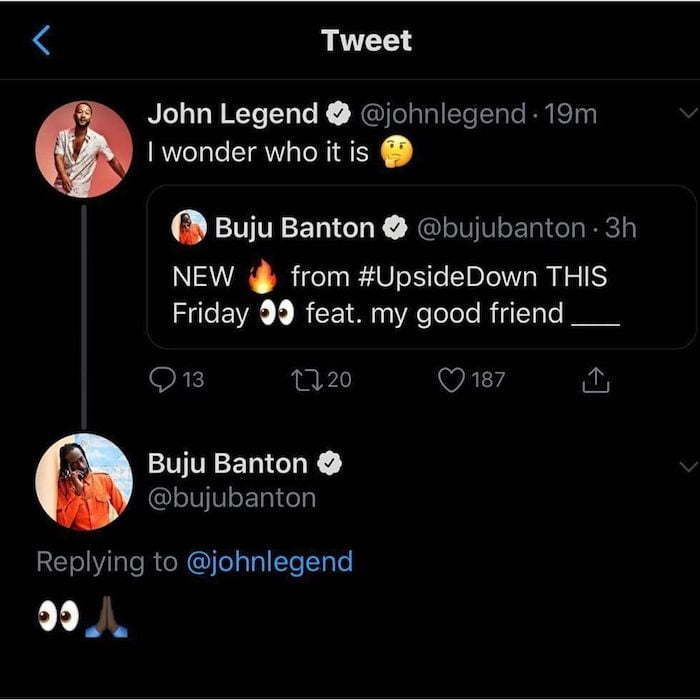 “I wonder who it is,” John wrote back on Twitter with the thinking face emoji. Buju Banton appeared to co-sign Legend’s hint with more watchful eyes and the prayer hand emoji, which is usually used to say thank you. They need not say much more as it has already been confirmed in the minds of fans that Friday will be the day that history is made.

Can you imagine both these extraordinary talents on one track? Such greatness can hardly be fathomed in theory, and therefore, fans will probably be on edge for the rest of this week as they twiddle their quarantined thumbs waiting for Thursday to be no more and the clock to strike midnight.

Buju Banton has already released the first track from the album on 4/20 called “Ganja Man.” What do you think his song with John Legend will be about?