A blogger on social media recently reported some shocking claims that Kirk Frost actually adopted Rasheeda when she was just 15, and then they married when she was 17! This quickly became a trending topic on Twitter and even caught Rasheeda’s attention. She responded to one person on Twitter denying all of the allegations. She tweeted, “Here’s some help I’ve never been adopted I didn’t know sh*t bout Kirk when I was 15 & sho wasn’t thinkin bout gettin married @ 17.”

The allegations partially come from the age difference between the couple and their storylines from Love and Hip Hop: Atlanta. Rasheeda says that she was born in 1982, which would make her 37. Kirk Frost is 51. The two recently celebrated their 20th wedding anniversary with a lavish party, and if you do the math, that would make her 17 when they got married. 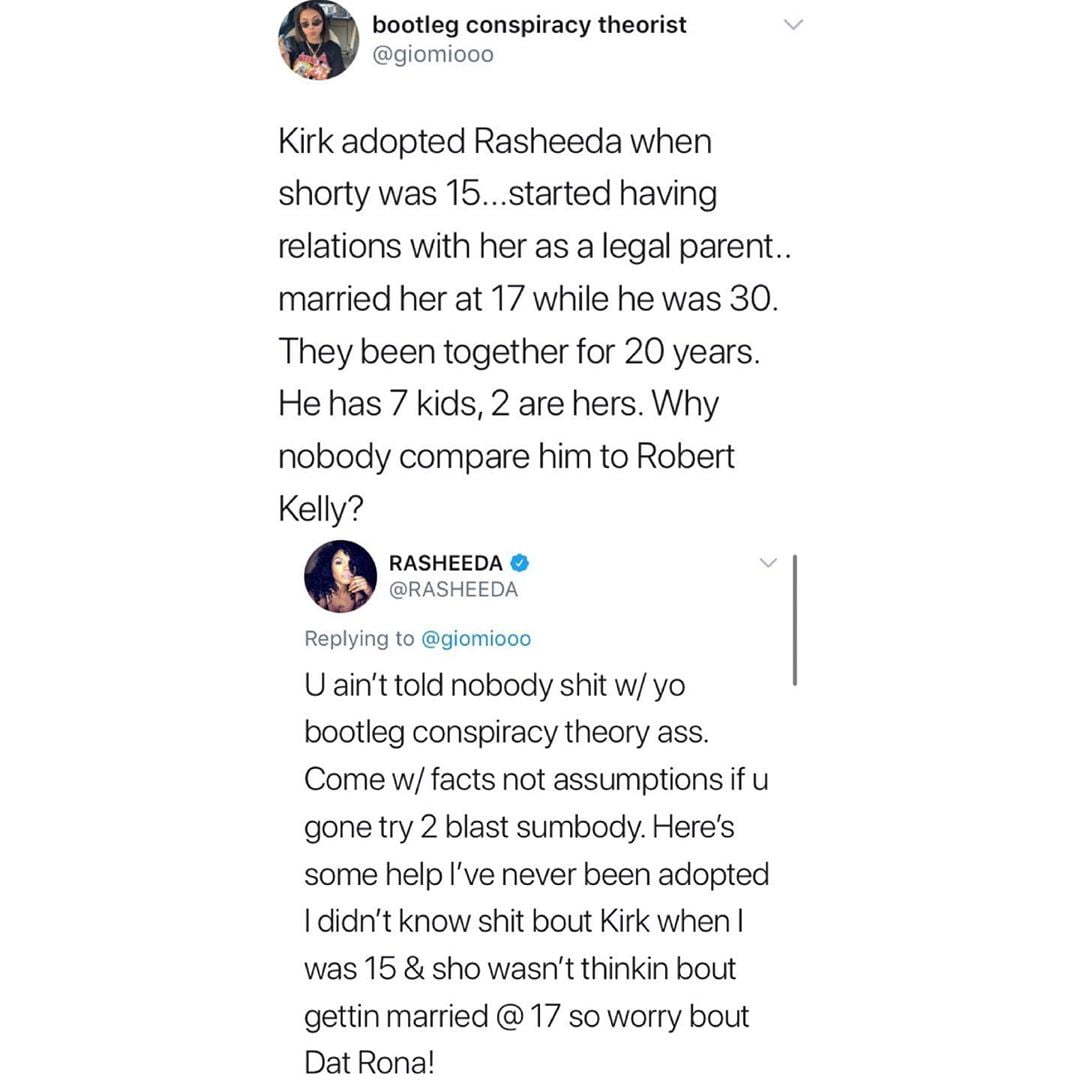 Some people on social media suggested that Rasheeda has been lying about her age and isn’t really 37, but well into her mid 40’s. They seemed to confirm that theory when they made a joint video saying that they got married in their 20’s. Kirk took the lead in the video saying, “First of all I didn’t adopt Rasheeda…I definitely wouldn’t marry someone when she was 17 and I’m 31.” He went on to say, “For the record I’m not telling anybody’s age but I’m not marrying a minor.”

#PressPlay: #TSRClearTheAir — Whew! The Frosts had to clear a few things up, after a young woman alleged that Kirk adopted Rasheeda, and then married her when she was a minor! (SWIPE for the original tea) #KirkFrost #RasheedaFrost

Fans on social media were not buying any of their excuses and continued to point out that the math on their relationship doesn’t add up, especially since the couple has a 19-year-old son together. Although the allegations haven’t been confirmed, some fans even called for Kirk to receive the same type of treatment as R Kelly, and labeled him as a predator.

In the mists of all of this breaking news, The Shaderoom dug up an old video that appeared to be of Rasheeda and a friend talking to the camera about her relationship with Kirk. The friend says something to the effect of, “She’s been with him since they were 17 years old….He had a fly as car, and that’s the only reason you got her ass out of high school.” Rasheeda, who was sitting at the table, seemed to confirm the statement.

#PressPlay: Oop! The girlies have pulled out a throwback of #Rasheeda and #KirkFrost talking about their relationship back in the day! (SWIPE for previous tea)

Neither Kirk nor Rasheeda have responded to the video, or have gone into any further detail regarding the story, but I’m sure that there is more to come with this story.