50 Cent drags Maino into his beef with Jim Jones, and now Maino is clapping back.

It seems Tekashi 6ix9ine has way more power than we give him credit for. The self-proclaimed ‘King of New York’ seems set to make his way out of prison, and he is already causing upheaval among the big players in ‘The City.’ Even though 50 Cent has pledged to hang up his trolling boots, he is still notorious for the shots he has taken at people when on social media. However, it seems Fif has a special place in his heart for fellow rapper Jim Jone, with the two of them constantly participating in their on and off beef.

The battle was reignited a couple of days ago when 50 Cent questioned how Jone is still being allowed to roam the streets after his name was caught up in Tekashi’s trial. During Tekashi’s trial, the feds played audio of Jim Jones working to orchestrate a hit on the multi-colored hair rapper and along with Fif clearly labeling Jim as a gangbanger. Fif thinks the reason Jones is not being investigated is that he is an informant working with the Feds.

These are pretty serious allegations, and while Jim did not say he is not an informant, he still did not take too kindly of 50’s words. He blasted the Power producer and called him out for knowingly supporting a snitch(6ix9ine). Speaking of support, New York rapper, Maino seemingly threw his support behind Jim Jones by double-tapping his post.

i learn something new everyday,?see i looked out for this guy when he needed help. I made a call to get him his deal but people forget. being a good judge of character is detrimental to success and people change so you have to watch them. if you stay on point you will peep the change. ?#abcforlife #powerbook2 Ghost #powerbook3 Raising Kanan #Powerbook4 influence #powerbook5 force. ??BOOM

Maino has always stood by 50 Cent’s side, but it’s unclear why he seems to be playing for the other team. It goes without saying that Fif was not down for it and called out Maino on IG.

“I learn something new everyday, see i looked out for this guy when he needed help. I made a call to get him his deal but people forget. being a good judge of character is detrimental to success and people change so you have to watch them. if you stay on point you will peep the change,” he wrote in the comments about Maino.

Not wanting things to escalate further, Maino got into the comments below 50’s post and express that him liking Jim’s post was a big misunderstanding. “Lol Nah I ain’t forget…Never will. You OverThinking brah,” he mentioned. 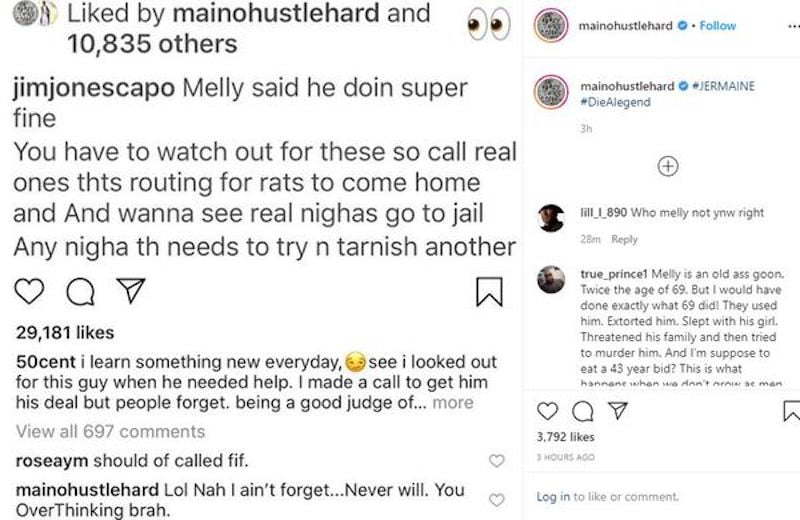 Maino, whose real name is Jermaine John Coleman, took additional steps to show his loyalty, posting a screenshot of his misstep on IG, captioning the post, “#JERMAINE #DieAlegend.”

Do you think Fif is really reading too much into things or is the shakeup necessary now that the King of New York is supposedly back on the streets?