The one-year commemoration of Nipsey Hussle’s unfortunate passing is here, and the music world is praising the life and career of the rapper, father and social activist.

On March 31, 2019, the beloved Los Angeles rapper who was born Ermias Asghedom, was gunned down in front of his South Los Angeles clothing store, The Marathon Clothing. A catastrophe agents accept it was the aftereffect of a dispute brewing between Nipsey Hussle and the alleged shooter, Eric Holder. Nip was only 33 years of age and left behind two kids—a girl Emani, and a son named Kross, whom he shares with his long-time girlfriend, on-screen actress Lauren London.

Nip’s sad demise came only half a month after he and his friends and family went to the 61st Annual Grammy Awards, where his introductory studio album “Victory Lap” was selected for “Best Rap Album.” Throughout his vocation, Hussle got adored for his mixtapes, for example, the “Bullets Ain’t Got No Name” series, “The Marathon,” and “Crenshaw.” The latter discovered a fan in incredible emcee JAY-Z, who bought 100 duplicates for $100 a pop.

Nipsey Hussle additionally turned out to be notable for his generous work and network outreach endeavors, particularly in his Crenshaw neighborhood. He financed the redesign of a play area and ball courts for a Crenshaw grade school and cooperated with Vector90 to dispatch Too Big To Fail, a STEM learning lab with a collaborating space open to South Los Angeles’ childhood. Nip also had huge plans to open collaborating spaces all over the nation. However, he sadly couldn’t see that specific arrangement work out as intended.

Family, friends, and fans are all paying tribute to Nipsey Hussle today. His brother Samiel Asghedom posted a photo of Nip and Emani at the Grammy Awards with a blue heart and a racing flag, symbolizing his enduring credo motivating excellence, “the marathon continues.”

DJ Khaled, whose track with Nipsey and John Legend titled “Higher” won a Grammy Award for Best Rap/Sung Performance this year, wrote on Instagram “ICON… INSPIRATION TO ALL OF US…THE MARATHON CONTINUES…Grateful for your friendship #HIGHER,” he said. 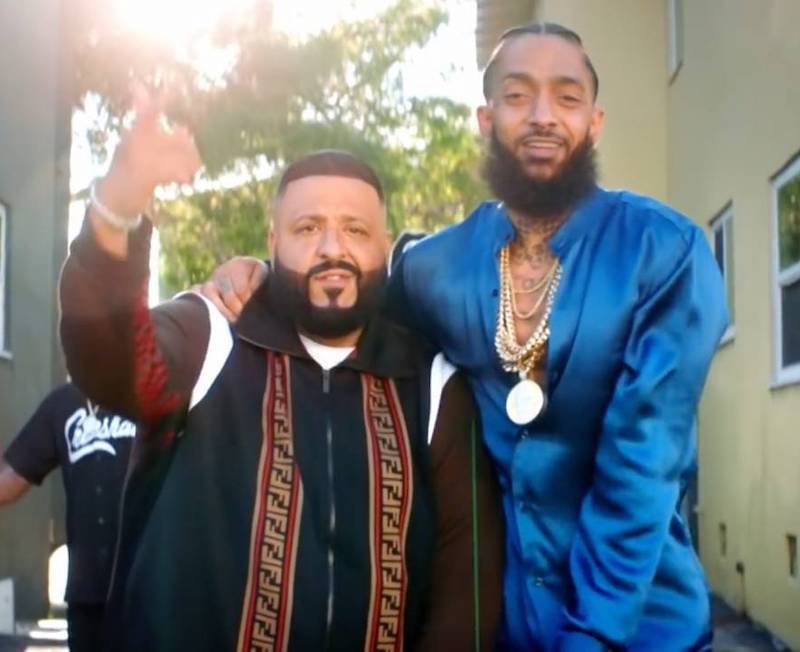 Meek Mill and Roddy Rich, who performed alongside Khaled at the Grammy’s for the Nipsey tribute, also paid their respects to the late icon. Meek Mill, who said he still plans to release his joint album with Nipsey, posted a photo to his Instagram of the two of them performing. In the caption, the rapper wrote, “#themarathoncontinues #nipforever.” Fellow L.A. rapper YG also said that he is planning on doing a IG live session later to celebrate Nipsey’s music.

Lauren London is yet to post to her Instagram today as we can imagine this is a very hard day for her. Her undying love for Nipsey is forever evident on her page, though where he makes numerous appearances. “Honorable. Powerful. Beautiful You Are. Miss you every second of every day and even in my sleep. Until we are together again …. I’m holding it down,” she wrote alongside her last post of Nipsey three weeks ago.

Hussle was taken from us before he had achieved everything he set out to – a reality that was probably indicative of the background that he never disregarded or disavowed. How he lived is the means by which he needed to be recalled — as a nobleman of character and principle and philanthropy.