Jim Jones made a bold statement saying that being a rapper is more dangerous than being deployed to war in Iraq.

The phenomenon of death is powerful. The effects of losing someone you know or look up to is devastating and has a way of changing one’s outlook, or the complete opposite, reinforcing prior positions held. For example, the Juice WRLD’s death saw many persons, including fellow rappers pledging, never to do drugs again. Another death rocked the hip hop community just a week ago when New York drill rapper Pop Smoke was killed in a brazen attack in California. Sadly, the gruesome way the thugs took out Smoke is still fresh in the minds of his followers, including his fellow co-workers, who have started to speak out on the not so cool aspects of being a rapper. Nevertheless, this statement by Jim Jones is getting a lot of attention.

2 Chainz took to his Instagram account to share some of his past run-ins not only with the law but rivals as well. “Been shot at in San Fran, got arrested in Maryland, La, New York and Oklahoma , had a so call stand off with police in Oklahoma, Cali spot got broken into 4 times all on tape and one of them even left they phone. ALLL SINCE I BEEN A “RAPPER,” he wrote. 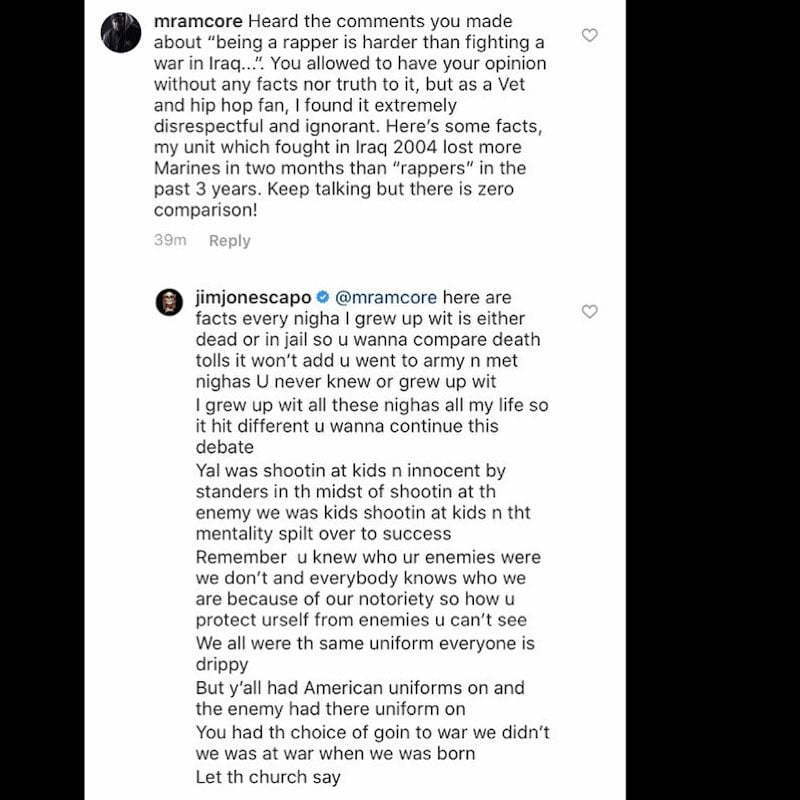 2 Chainz was not the only rapper to speak out about the occupation, as New York rapper Jim Jones also exposed just how dangerous it can get. As a matter of fact, during an interview with RapRadar, he went as far as to compare the hard streets of the American slums to the troops fighting wars on foreign soil such as Iraq.

When questioned about his reasons behind his comment, he mentioned, “Because you’re always on defense…You don’t know who’s who… People can get right up on you and do sum’ to you… You’re always getting into beef.” To support his argument he then mentioned the recent shooting incidents involving rapper, “How many times you heard of rappers getting shot up this week?”

Naturally, his comments and opinions angered quite a few persons, some of whom have lost family members send to war zones over the years. One veteran proceeded to provide Jones with some cold hard facts below one of his post, “My unit which fought in Iraq in 2004, Lost more marines than in 2 months than “rapper” in the past 3 years. Keep talking but there is zero comparison.”

This was not the only comment bashing Jones for his views, with many persons calling on the legendary rapper to apologize to the veterans. Jones did have a few backers who either claimed that joining the army was a choice or that both occupations are dangerous in their own right.

What are your thoughts on the situation, and do you think Jim Jones should apologize?

What’s your thoughts ? on this? Do you agree or disagree w/ @jimjonescapo ? Or the statement should be why is #HipHop success always involve violence & negative energy? ?????????????????? Hit the #LinkInBio and #subscribe to our #YouTubeChannel Episode 3: Coming Soon!!!!!!!