Tahiry Jose has stepped forward to addressed backlash she’s been getting from Love and Hip Hop New York fans.

One of the major storylines on this season of Love and Hip Hop New York is the “love triangle” between Cyn Santana, Joe Budden, and Tahiry Jose. Tahiry is an OG cast member and former long term girlfriend who famously turned down Joe’s marriage proposal in Times Square. Cyn and Joe Budden were engaged for about a year before calling it off due to alleged infidelity. The two also share a two-year-old son together.

Tahiry and Cyn have been butting heads on this season of LHHNY over their respective relationships with Joe, and they both seem to be in some sort of competition to be “THE ex.” In a recent episode, the two had yet another sit-down conversation about the issues between them, which seem to be centered around Joe. Keep in mind that neither woman is currently having a romantic relationship with him, so they say.

Cyn Santana shared that she was uncomfortable with the way Tahiry comes at her “Spicy”, and says that she should have more respect for their situation because she is the mother of his child and ex-fiance. However, Tahiry openly questioned if Joe was being honest with Cyn about how often she and Joe talk. She said, “I’m sure he is trying to protect your feelings because I don’t think he’s being honest with you about certain things.” 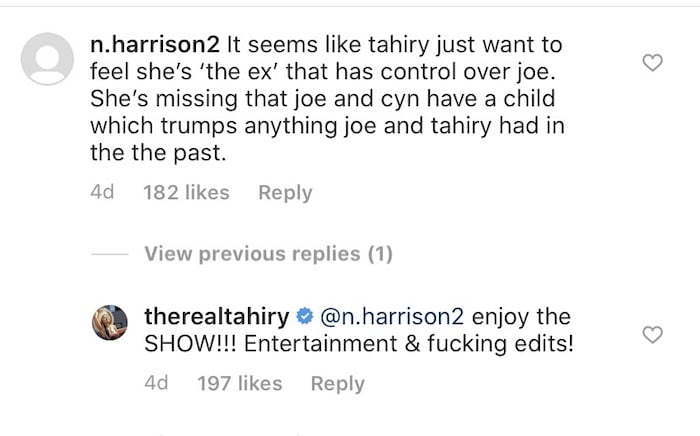 After the episode aired fans on Twitter were not feeling some of the things that Tahiry had to say and felt that she was being messy for the TV cameras. One fan said, “It seems like tahiry just want to feel she’s ‘the ex’ that has control over Joe. She’s missing that Joe and cyn have a child which trumps anything Joe and tahiry had in the the past.”