Drake says Popcaan is probably the hardest person to reach via phone and now we know why.

Imagine asking Siri, Alexa, or any other voice command app on your phone to dial over 20 names just trying to get to one person, sounds tiring, doesn’t it? That must be how Drake feels when trying to get in contact with Jamaica’s most unruly act, Popcaan. The dancehall deejay goes by many names, Fry Yiy, Boil Brainz, Pop Skull, Unruly Boss, Unruly Skull, and there may just be a few that we are not aware of. Apparently, Drake knows all of Poppy’s aliases because he has them stored in his iPhone, yet he still cannot get through to Popcaan quickly.

Drake posted a screenshot of showing the various names the “Gangster City” artiste’s numbers are saved as and even claimed the ones in the screenshot are only from last year. “Name that one person with 20 numbers that claim they cannot get a hold of you [laughing emoji] @popcaan. This is just from 2019, and this not including if I search “Pop” in my phone. [laughing emoji] TROUBLE,” mentioned Drake as he used one of Popcaan’s slang. 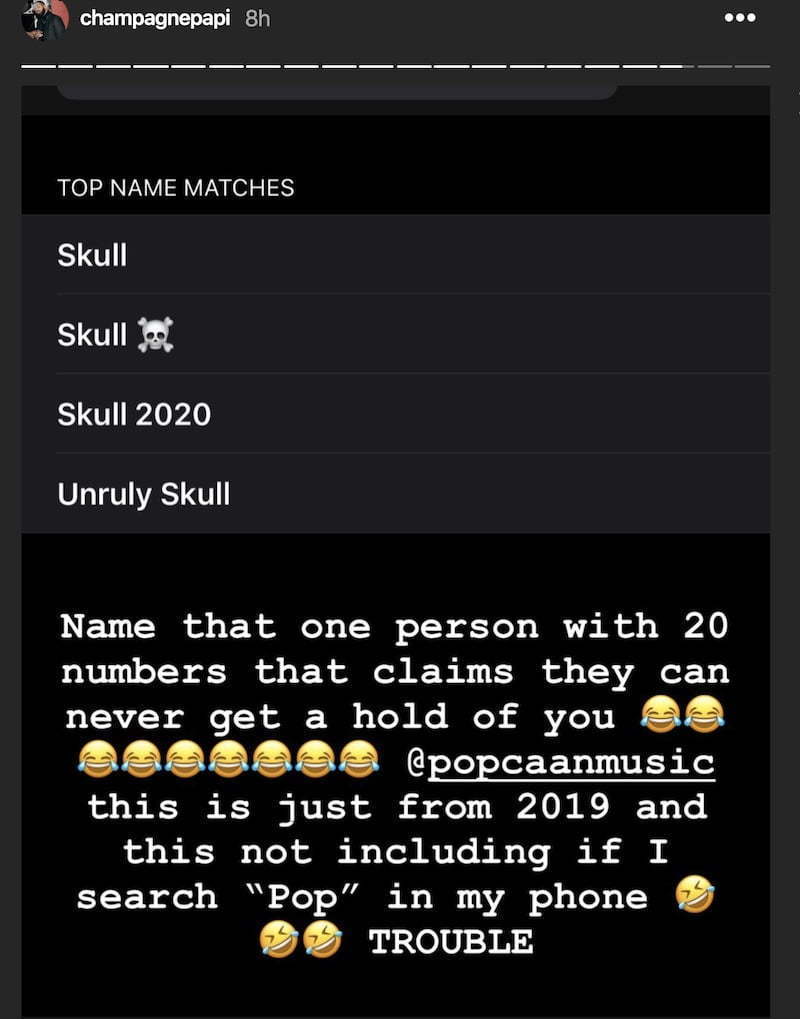 Drake and Popcaan have been connecting since 2013, ever since the two linked up on one of Popcaan’s tour of Canada. It’s evident that their relationship has grown way pass just business and is now on the level of mutual friendship. Also, let’s not forget that Popcaan is indeed signed to Drake’s OVO Sound Record Label. Therefore, if the head of the label wants to get to you, he should be able to, right?

Popcaan has recently purchased a house in Ghana and has been spending a few days in the West African nation. Before leaving Ghana, he mentioned that he and his crew would be jetting off to 6 God’s hometown, Toronto. Yesterday he posted an image of him and his team chilling in the “416.” The background of the image shows a light similar to one a videographer would use, sparking speculations that he may be shooting a video, however, there is no actual confirmation from Popcaan or his team to support this.

What we have not yet seen is an image of Drake and Popcaan since the “Money Heist” artiste touched down in Canada. Maybe Drake was trying to arrange a meeting with Popcaan, and that is the reason for trying to get in touch.

We are still left to wonder if Drake got a hold of Popcaan, maybe Drake should try sending a direct message from Instagram instead.