It appears that the feud between Kenya Moore and Nene Leakes has reached a new high, and now the ladies want to put the paws on each other!

One of the biggest storylines this season on the Real Housewives of Atlanta has been the falling out between NeNe Leakes and Cynthia Bailey. The former besties had been friends for over 10 years, but things changed at the end of last season when Cynthia invited Kenya Moore to an event that Nene was attending as well, and not giving her the heads up. Kenya and Nene more than don’t get along, they are enemies, and have been since Kenya started on the show in season 5. 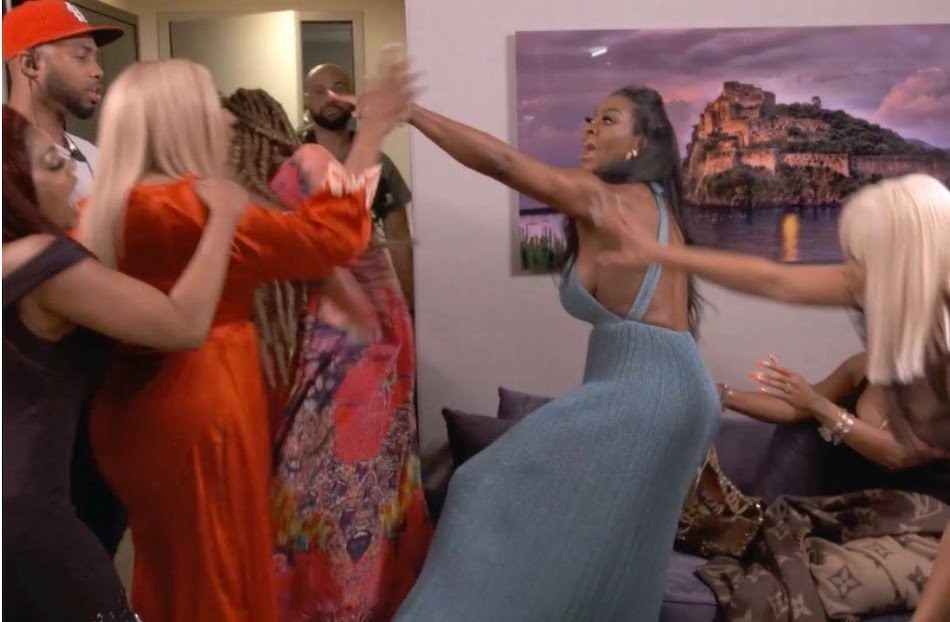 On the latest episode Sunday night, the ladies were in Toronto to celebrate Carnival, the festival to honor the culture of the West Indies and the Caribbean. On their final night there, Porsha Williams decided that she was going to find out who made the recording and expose them for it. When the discussion started, Porsha straight out accused Yovanna of making the recording. Yovanna denied it, and instead brought up issues in Porsha’s relationship with her on-again, off-again fiance, Dennis. The two ladies both got in each other’s faces and had to be pulled apart by security.

The biggest clash of the night came when Nene approached Cynthia to try and clear the air about the entire recording situation. Although Nene seemed sincere, Kenya didn’t seem to think so and jumped in between the two and shut down the conversation saying, “Nene you should have spoke your peace when you had the time too. Now is not the time.”

Kenya stepping in set nene off, and chaos ensued.

NeNe had to be held back by Porsha, producers, and security. The fight continued out into the hallway that night, with Nene even going as far as following Kenya towards her room. After that, things seemed to calm down for the night, and each lady went their separate ways.

Sheesh, it looks like the Atlanta Housewives know how to bring the drama no matter when or where they are. I guess we will all have to tune in to see if Cynthia and Nene ever get to have the discussion about their friendship…without any of the other girls stepping in again.

You can catch the latest episodes of the Real Housewives of Atlanta Sundays at 8:00 PM EST on Bravo.