Did Spice and Shenseea have a huge fight backstage at Jamfest?

Well, fans seem to believe so, but the “Blessed” dancehall artiste denies it. Jamfest, which is an annual stage show hosted in Montego Bay, Jamaica, was held at the Catherine Hall Multipurpose Stadium this past weekend. This year was particularly exciting because the line-up included thrilling acts the likes of Spice, Teejay, and Shenseea. Shortly after the event, which saw great performances and even surprised appearances from Shaggy and more, rumors started to emerge that Spice and Shenseea had an argument backstage.

The rumors began when popular Instagram handle @pinkwalljmg_ posted a screenshot of a DM they received from a fan who was allegedly present at the event and witnessed a heated Spice in her rage. In the DM, the fan claimed to be walking by Spice’s tent when she heard the Love and Hip-Hop star say, “She too bl*****aat bright man.” According to the fan, this is wear a gentleman who was also under the tent responded with “wul it dung nuh muma, me ago page romeich bout him artiste man,” the fan alleges. 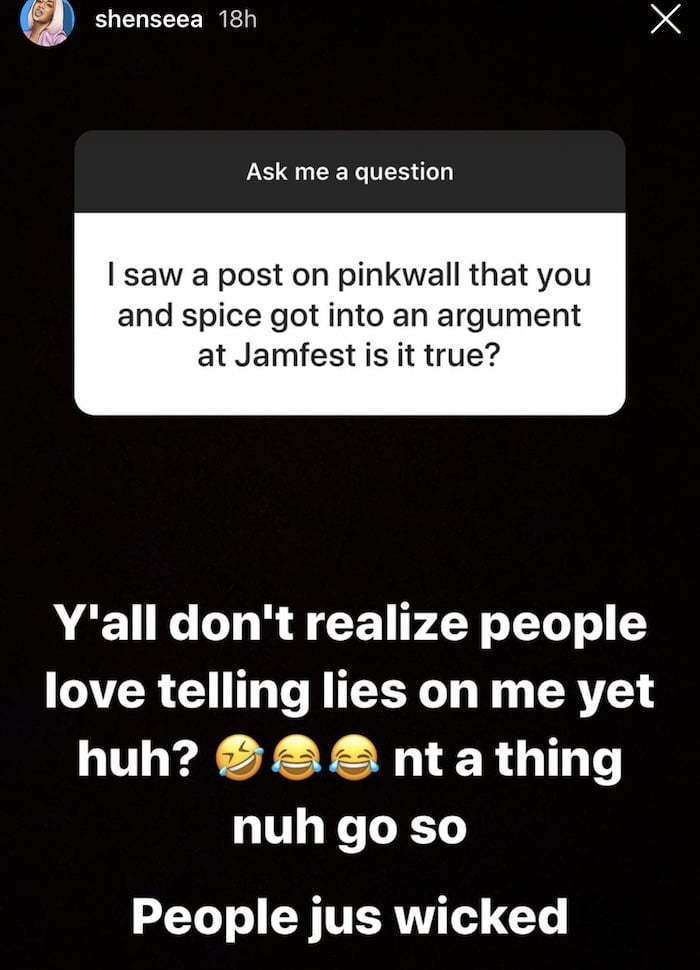 Speculation grew further when Spice took to Instagram after the show to post a photo of her in the company of legends Shaggy and Sean Paul along with her recent collaborator Stylo G. In the caption that had everyone talking, Spice said in part, “Thanks for coming and this is exactly how Dancehall should be the support is #Real 4S in dancehall #Spice #Seanpaul #Shaggy #StyloG,” Spice wrote. Fans immediately assumed that this was a shot at Shenseea, whose name also starts with an ‘S’ and who was clearly also a performer on the show in question.

Luckily, Shenseea took to her Instagram story to dispel the rumors with a light heart. The 23-year-old dancehall artiste posted an Instagram story inviting her fans to ask her a question. One brazen fan respectfully asked what we all wanted to know. “I saw a post on pinkwall that you and spice got into an argument at Jamfest is it true?” the fan asked. To which Shenseea responded, “Y’all don’t realize people love telling lies on me yet huh? nt a thing nuh go so. People jus wicked,” she wrote.

Shenseea does not usually respond to gossips or address anything being said about her in the media. Matter of fact, she does a good job of ignoring everybody, including Jada Kingdom, who released a lethal diss track for her and got no response, not even so much as an acknowledgment. That being said, it’s great that we actually heard directly from the horse’s mouth that this story is fake news. Let’s hope these artistes are truly going into 2020 with positive vibes and on good terms.