Once things have entered the internet, they never disappear, and will likely resurrect to haunt you years later (remember your MySpace account? You know you do.) Swedish singer, Snoh Aalegra, may have never been heard of by many outside the Scandinavian country, but she’s making headlines now for some pretty controversial reasons. Three years ago, a tweet addressed to the “Find Someone Like You” singer’s friend, Sevn Thomas, stated, “The realest n***a alive.”

Although used colloquially in the hip hop community amongst rappers, people on Twitter were not impressed to hear it coming from a Swedish singer with Persian heritage. As it turns out, however, the 32-year-old was not to blame. The tweet addressed to Sevn, was, in fact, him messing around and blowing his own trumpet from his friend’s account. Haven’t we all been caught out by leaving our social media accounts open, only for our mates to post something embarrassing while posing as us?! 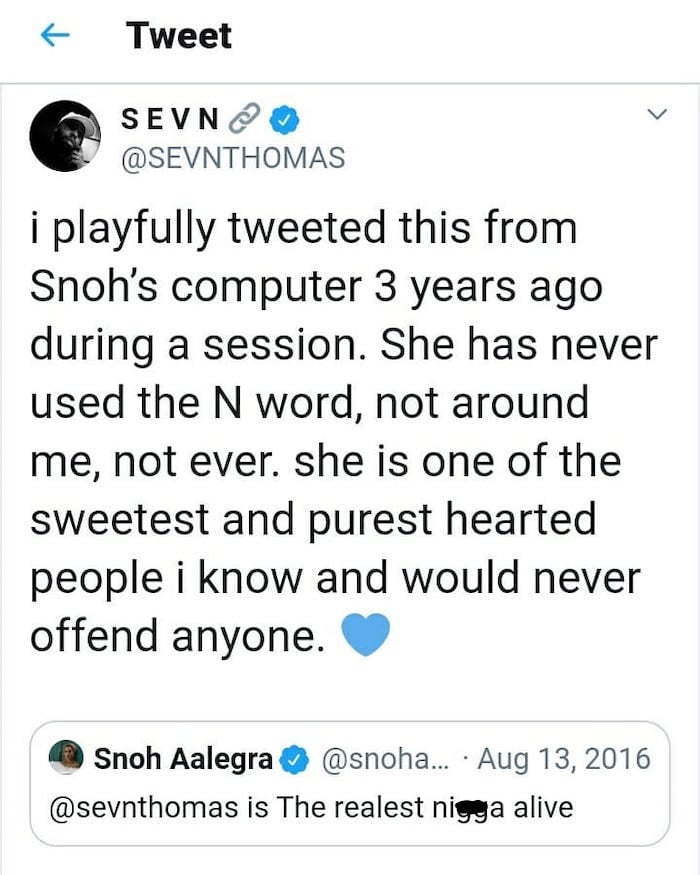 “I playfully tweeted this from Snoh’s computer 3 years ago during a session,” the record producer wrote. “She has never used the N word, not around me, not ever. she is one of the sweetest and purest hearted people I know and would never offend anyone.”

Anybody that knows me knows that I would never use those words for any reason.

Twitter users were quick to poke holes in Sevn’s story and point out that the tweet stated it had been sent from an iPhone. But even so, fellow producer, Boi-1da, has also come to Snoh’s defense.

I ain’t here for no kind of Snoh slander, FOH with that. She’s done nothing wrong.

“I ain’t here for no kind of Snoh slander, FOH with that. She’s done nothing wrong,” wrote the producer who is part of the in-house team at Drake’s OVO Sound label.

Perhaps all of this hate is the result of Snoh’s new relationship with Michael B. Jordan. She has been linked to the Black Panther actor for months, but he recently featured in her music video for “Woah” where they played a loved-up couple.