Dancehall artiste Spice has been going off on the gram, and fans are speculating that the deejay is going through a horrible breakup.

A few months ago, rumors started swirling that Spice had a new man in her life, after her post performance interview with Dutty Berry at the 2019 Reggae Sumfest. During the interview, Spice admitted that she had a “good good nice clean man” that she loves, but she did so under the guise of jest. Though many fans were not convinced at the time by Spice’s sarcastic tone, more evidence has been popping up since that indicates that the “Cool It” deejay is in a relationship.

The Love and Hip-Hop star is currently in Atlanta, where she films the reality TV show, and she is suddenly becoming much more vocal about the relationship that seems to be deteriorating. Taking to Instagram on Tuesday, Spice shared an angry post that raised many eyebrows. “F**k outta here you didn’t even deserve to know me,” she wrote. 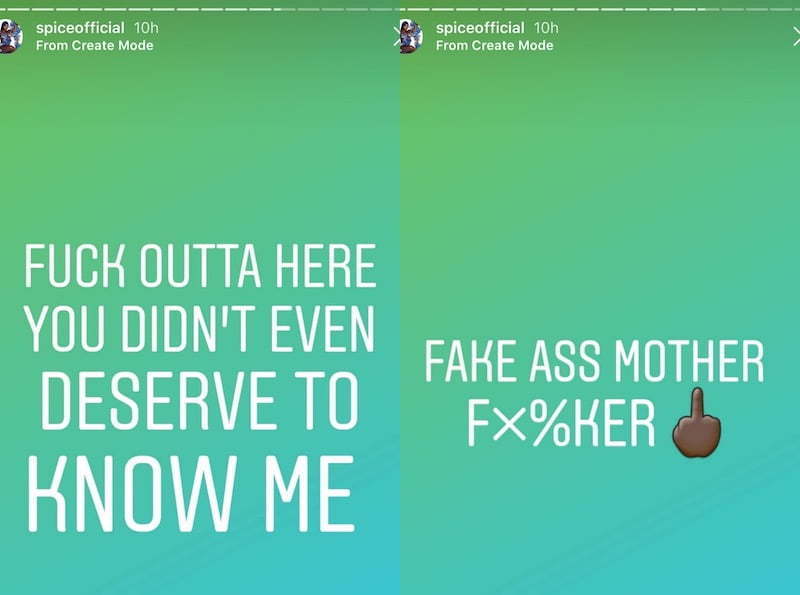 The day before, the dancehall vixen shared another message with her followers that read: “Little things have to happen with you and someone to show you the bigger picture.” Spice captioned that post with this thought: “We need to start looking at things people do to us and judge their character; for me, it’s just the small ‘little’ things in life that open up my eyes so keep your eyes open, because sometimes we are sleeping with the enemy #Bewise watch the words they say, and study their actions.”

The biggest giveaway was in Spice’s story, where she was discussing the matter with her celebrity stylist friend. The women can be heard talking about a man that Spice was extremely loyal to. Spice’s friend told her that her situation could be an eye-opener to show the deejay that there are other people out there for her. “You think so?” Spice asked. As the conversation continued, her friend added, “At the end of the day, you’ve been too f***ing loyal to that man, like straight up,” she said.

Spice really seemed to be feeling this mystery man though as she let it slip in the fifth episode of her Magnum Tonic Wine talk show, Spice It Up this month. “Memba a nuh everybody we heart jump fa enuh but yuh see when we find da one boy deh, like how me [have one wah] a mad mi,” Spice said as she cracked up laughing. “Mi weak to di boy,” the deejay added.

Since Spice is currently in Atlanta, we can’t ignore the fact that this might very well be a publicity scheme to get the buzz going for Love and Hip-Hop Atlanta, but we hope the dancehall queen is not heartbroken over this. Do you think we will hear more about Spice’s mystery man on the next season of LHHA?