Vybz Kartel and his co-defendants got some great news from the appeal court this week.

Jamaica’s Appeal Court has issued a statement to Vybz Kartel’s defense team, updating them on the pending verdict. According to the three judges sitting on the court, their judgement is at an “advanced stage,” which means that the verdict could come in a matter of weeks or months. Kartel’s lead attorney, Queen’s Counsel Tom Tavares Finson, recently sent a letter to the court inquiring about the case. The court’s response is by no way a final decision on the case, nor did they announced a final date for the verdict. Therefore, the “advanced stage” announcement can be interpreted as the final decision is close.

In a letter from the Court Registrar responding to Tavares-Finson’s inquiry, the Appeal Court revealed that the attorneys would also be notified before the verdict is released to the public. “I am directed to advise that the judgement herein is at an advanced stage of preparation,” the letter, dated December 2, 2019, reads. “As soon as it is ready and the court has set a delivery date, all the parties will be duly notified.” 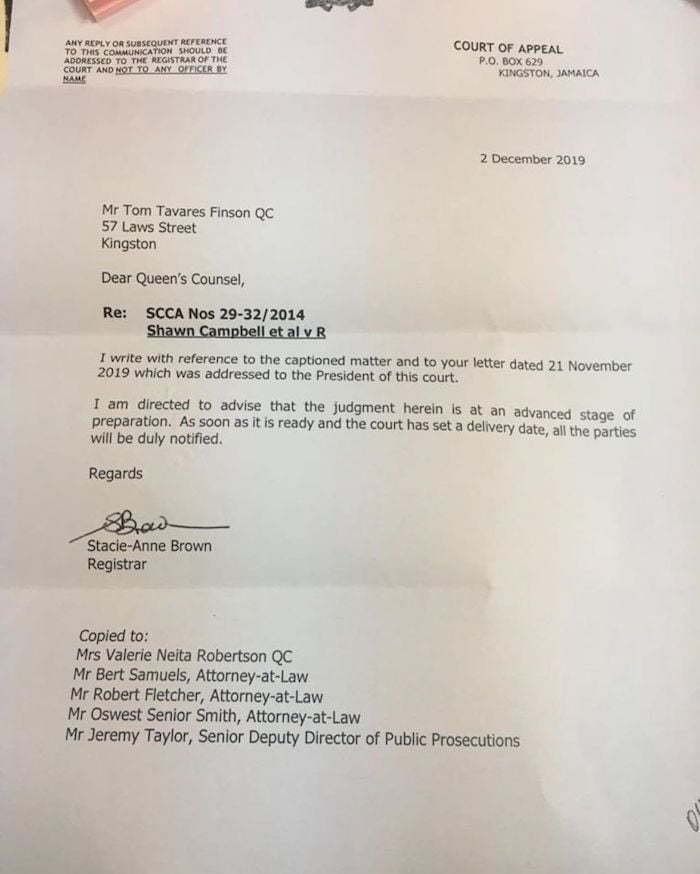 The court has been reviewing the murder appeal case since July 2018 when both sides aired arguments before the panel of judges. Vybz Kartel, born Adidja Palmer, and his three co-defendants, Shawn ‘Storm’ Campbell, Kahira Jones, and Andre St John, are hoping that the court will overturn their murder conviction and set them free before Christmas.

Kartel previously hinted that he plans to take his case to the highest court possible if the outcome of his appeal is not favorable to him. During the appeal hearing, the defense team argued that police had tampered with some of the evidence used to convict the four men in 2014. At the heart of the defense contentions, are some text messages lifted from a Blackberry smartphone belonging to the dancehall legend.

Vybz Kartel, Shawn Storm, Jones, and St John are currently serving life sentences for the murder conviction. The victim, Clive ‘Lizard’ Williams’ body, has yet to be found.